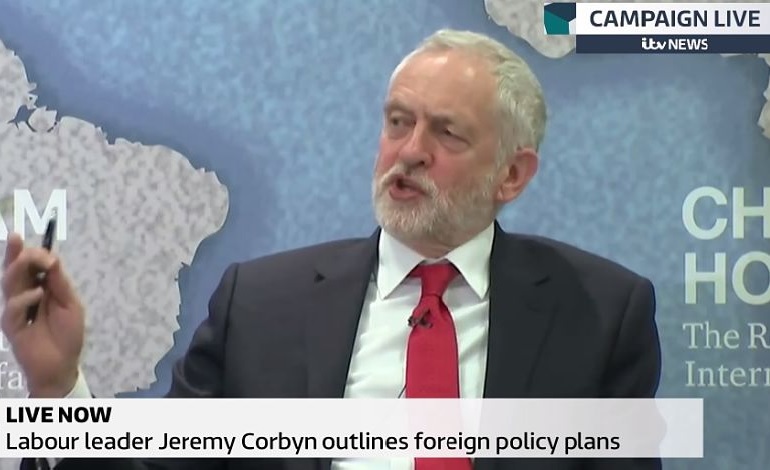 The BBC’s John Pienaar attended an event where Jeremy Corbyn laid out his foreign policy vision on 12 May. And Pienaar’s exchange with Corbyn at the event provoked a universal groan from the audience. Because it revealed exactly how ugly our public broadcaster now is.

After Corbyn’s speech, members of the press and the public were given a chance to pose questions. Pienaar asked:

What do you say to voters who support the British nuclear deterrent when you’ve made clear you would never order its use? Either first or in retaliation. You have made that clear, haven’t you?

And what do you say to supporters of British military power, when it’s not clear in what circumstances you would ever order forces into battle, in or out of NATO and including strikes against Islamic State?

Two other people also asked questions at that stage. And Corbyn answered them all together. He said the question of the UK’s security was “paramount” and confirmed that there are situations in which military force is necessary. And he gave the Second World War as an example of justifiable military action. Furthermore, he recalled a UN-backed intervention in East Timor that he said “worked”. But he asserted that such action should be done “on the basis of law” and “through the United Nations”.

He also explained that he had met with rape victims in the DRC, which is being used “an instrument of war” in that country. That experience, Corbyn said, was “the most traumatic and educative experience of my life”. And he suggested “we” could have done more to settle that conflict, and questioned whether the “economic interests” of some may explain why “we” didn’t.

It is “unilateral action”, however, that Corbyn said he ultimately questions.

Corbyn then responded to a query about whether he’s ‘scared’ of being the UK’s commander-in-chief. He commented:

If you don’t mind, one slight anecdote. I met a group of refugees in a refugee camp in Syria, before the present conflict broke out. And these were people living in tents on the border of Iraq and Syria in appalling, appalling conditions. They deserved better.

And I was talking to this 14-year-old girl and her family… I said what do you want to achieve in your life? And this child, in a tent, in the middle of misery and everything else, she said ‘thank you for your question, I want to be a doctor’. Wow. She had ambitions.

You see those all over the world. And so the opportunity of leading a government that will help to promote international law, will address issues of global imbalance and insecurity, and will be realistic about terrorist threats, realistic about threats of cyber insecurity, is something that I actually relish. Because our task surely has to be to leave the world better and more peaceful for the next generation, rather than more dangerous and more at war…

The audience vigorously applauded these statements. Pienaar, however, had a slightly different reaction.

Rotting at the core

The BBC’s Deputy Political Editor – second only in rank to Laura Kuenssberg – was obviously not fully satisfied with Corbyn’s answer. So, he tried to shoehorn in another question. He began:

Mr Corbyn, Mr Corbyn… briefly for the sake of clarification… You mentioned the importance…

But Pienaar didn’t receive applause for his ‘intervention’. Instead, the audience groaned. Corbyn wouldn’t allow him to finish, and neither would the host – saying it was “unfair” to others. But what would Pienaar have asked? About the importance Corbyn had placed on human rights, people’s lives, safety and dreams? About the importance he’d placed on international law, diplomacy and “realistic” solutions throughout his speech?

Or was he about to demand more answers on Trident and the “British power” he spoke of at the start? The audience’s reaction suggested they expected it to be closer to the latter. And they universally rejected it. When given the choice between a foreign policy that places a value on life and another that values “power” above all else, the audience saluted the former.

And that’s a choice that the wider public will be faced with too, when they vote in the general election.