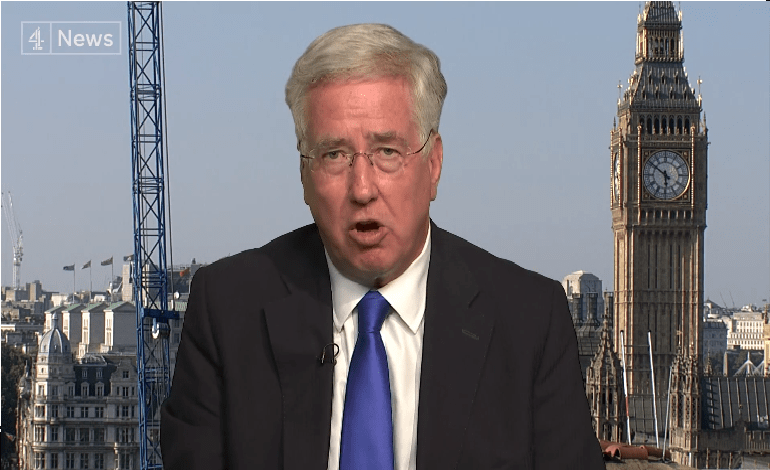 Tory Defence Secretary Michael Fallon was left red-faced after falling head-first into a trap on Channel 4 News. Fallon launched an attack on what he thought was Jeremy Corbyn speaking about the link between UK foreign policy and terrorism. But, actually, Fallon was attacking the words of Tory Foreign Secretary Boris Johnson:

Host Krishnan Guru-Murthy read out a quote to Fallon:

Isn’t it possible that things like the Iraq war did not create the problem of murderous Islamic fundamentalists, but the war has unquestionably sharpened the resentments felt by such people in this country and given them a new pretext?

Assuming the quote was from Corbyn’s landmark speech on terrorism, the Defence Secretary replied:

Well, they’re not entitled to excuses.

But it turns out the quote is from Johnson, after the 7/7 bombings in 2005. As Krishnan pointed out:

those are actually the words of Boris Johnson, the Foreign Secretary… he goes on to say, ‘the Iraq war did not introduce the poison into our bloodstream but, yes, the war did help to potentiate that poison’.

Despite making the same point, Johnson also called Corbyn “monstrous” for his speech.

After an embarrassing U-turn on their manifesto, the slip up is yet another blow to the Conservatives. Especially given the Defence Secretary’s key role in the Tory campaign. Fallon is supposed to make Corbyn look like the dangerous option at the ballot box. He’s the ‘strong face’ of a Conservative Party serious about national defence. But he was left humiliated on Channel 4 News.

By contrast, Corbyn’s speech on terrorism was very well received on 26 May. Perhaps because the Labour leader is treating the British public like adults. The consensus of both UK and US intelligence agencies is unequivocal: there is a link between aggressive foreign policy and domestic terrorism.

Fallon himself surely knows about this connection. But it’s Corbyn who is willing to be honest with the electorate.