Jeremy Corbyn raised tough questions about terrorism. But there's one nobody wants to ask - Canary 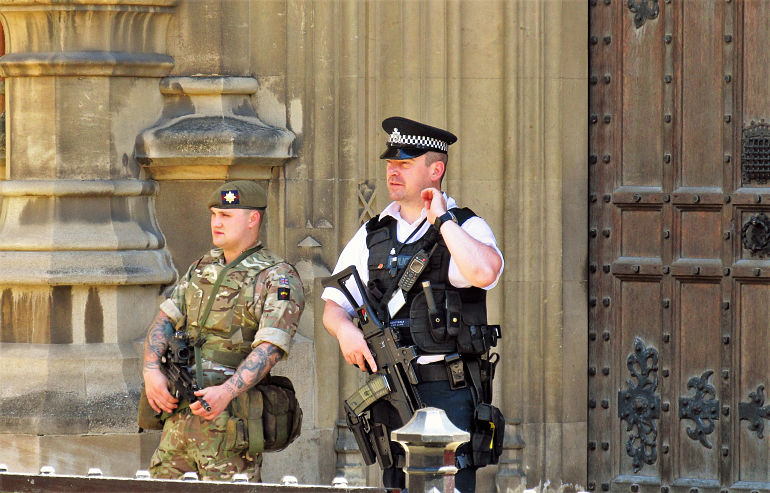 It takes a brave politician to raise awkward questions about the wider causes of terrorism. Such as Britain’s chaotic foreign interventions in Libya and the lessons not learned. And Labour Party leader Jeremy Corbyn did just that on 26 May. But there is another uncomfortable question to be asked. About how a society protects itself from terror without adopting authoritarian measures. Greater surveillance, more armed police and neighbour spying on neighbour: that is Britain right now.

But as with the arming of police and the expansion of snooping technologies, the deployment of military on the British mainland is by no means a new phenomenon.

In the lead-up to the 2012 Olympic Games, officers from the Royal Marines collaborated with the Metropolitan Thames River Police. This was part of a joint security exercise. But it was not until July 2015 that details first emerged of ‘Operation Temperer’, via minutes of a closed session of the National Police Chief’s Council (NPCC) in April of that year.

A month earlier, the Met staged a drill in London to test the operation. This involved around 1,000 armed officers at a disused tube station, practicing evacuating members of the public, treating injuries, managing a crime scene and pursuing and capturing the culprits.

It was over the Christmas 2015 period that Operation Temperer was first officially activated, when officers with 3 Commando Brigade took part in an ‘immediate response force’. No further details of that intervention were made public.

But it was some years before Operation Temperer was conceived that a similar one ended in tragedy.

In July 2005, officers with the secretive Special Reconnaissance Regiment (SRR) were deployed in a surveillance operation. Brazilian Jean Charles de Menezes, an electrician living in London, was mistakenly thought to be connected to the July 7 terrorist attacks. He was trailed to the Stockwell underground station by SRR operatives. As he boarded the train, he was fatally shot.

Controversially, the killing was ruled lawful. However, the Independent Police Complaints Commission (IPCC) report into the tragedy failed to mention how the SRR were directly involved. Instead, it only identified the surveillance operatives as S012 (Special Branch) and S013 (Anti-Terrorist Branch).

And in charge of that operation was Cressida Dick. She is now the Met Commissioner.

In the immediate aftermath of the Manchester bombing, British troops were again deployed to assist police.

The Metropolitan Police Service (the ‘Met) clarified their role:

The public will see more armed officers, working alongside their neighbourhood and specialist colleagues on proactive operations and targeted patrols, both on foot and in vehicles. Locations of their deployments, types of tactics and numbers on duty will continually change to be the most effective and avoid predictability. Those armed officers will also provide support to colleagues working on Project Servator. This tactic uses teams of specialist police officers who have been trained to spot the telltale signs that a person may be carrying out hostile reconnaissance or committing other crime. The approach is based on extensive research into the psychology of criminals and what undermines their activities.

But for how long will these troops remain on our streets?

Thin end of the wedge?

There will always be a valid concern that the deployment of armed troops on British streets is the thin end of the wedge. That it might mean Britain ends up with a permanently armed ‘gendarmerie’. As the French will attest, given the terrorist atrocities they experienced, that is not necessarily a solution.

In the wake of an atrocity like Manchester we should remain vigilant. Not only of the terrorists. But also of those ever-present forces in governments that seek to exploit our fears and so undermine democracy.