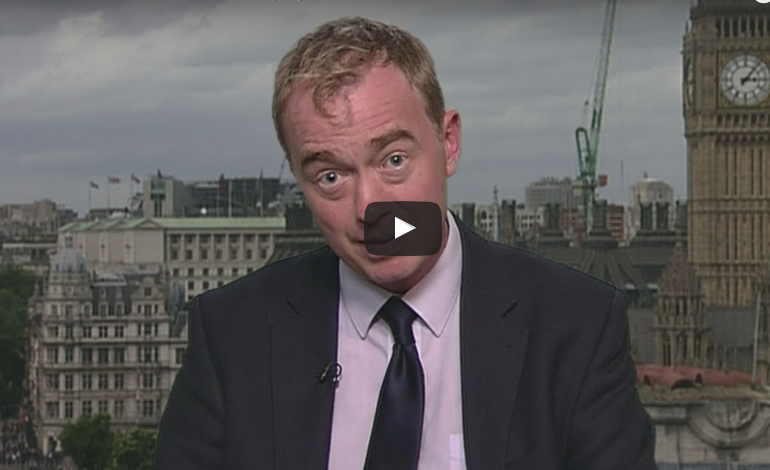 Liberal Democrat leader Tim Farron broke ranks with progressive parties on 26 May, condeming Jeremy Corbyn’s groundbreaking speech on the war on terror. Since his outburst, footage has emerged which could well sink his party’s hopes of gaining ground in the 8 June general election.

Labour leader Jeremy Corbyn has been praised from liberal and conservative commentators for Friday’s speech. After expressing sympathy with the victims of the 22 May concert bombing in Manchester, and support for the emergency services personnel who rushed to their aid, Corbyn said:

The blame is with the terrorists, but if we are to protect our people we must be honest about what threatens our security.

And no rationale based on the actions of any government can remotely excuse, or even adequately explain, outrages like this week’s massacre. We must be brave enough to admit that the war on terror is not working. We need a smarter way to reduce the threat from countries that nurture terrorists and generate terrorism.

In doing so, Jeremy Corbyn gave political voice to the concerns expressed by security experts and public figures across the globe. The speech was praised across party and political lines.

Green MPs will push for a truly ethical foreign policy – and seriously scrutinise the march to war of any government. pic.twitter.com/fOsiGJyJtE

That was a strong speech from Corbyn. No cheap points, just a serious argument about how to defy terrorism. Treating the public like adults.

It is not clear to me that these interventions that we’ve made in predominantly Muslim countries have done more to suppress terrorism than they have to arouse… disgruntlement.

Wait, what? Did Michael Portillo just take the words out of Jeremy Corbyn's mouth? #bbctw pic.twitter.com/x7kcJHHoqD

Progressives on all sides lined up to support Corbyn’s assessment. But Farron joined with the Conservative party in attempting to undermine the Labour leader, saying Corbyn had used the “grotesque act to make a political point”.

Inconveniently for Farron, however, footage has reemerged of him making exactly the same points just one year ago. Speaking in the House of Commons in July 2016, the Liberal Democrat leader said that Tony Blair’s “single-minded determination to go to war” now threatens “the safety of all of us”. He continued:

What has come next is the fuelling of what is now ISIS, Daesh, which threatens not only Iraq, but the Middle East and indeed the safety of all of us

Tim Farron: Iraq war now threatens the safety of all of ushttps://t.co/FAoPDpeF1R pic.twitter.com/xQnWpniO2r

The cynical move by Farron is comparable to other recent hypocrisies. Despite being leader of the Liberal Democrat party, Farron’s voting record is hardly progressive. He voted against the Equality Act, and abstained on the vote to grant equal marriage to same sex couples in 2013. After public pressure, he reversed these decisions. But in interviews, after becoming leader, he refused to deny that he considers sex between same sex partners a sin.

This latest move will come as a reminder to voters of past disappointments by the Liberal Democrats.

The party won a swathe of new seats in the 2010 election thanks to the student vote, following its pledge to scrap tuition fees. However, the party then formed a coalition government with the Conservative party, and trebled tuition fees. It also supported the Conservatives in rolling out the austerity programme which imperiled public services and blighted the lives of welfare claimants, particular sick and disabled people.

The party was wiped out in the 2015 general election for these perceived betrayals. And now, two weeks before the 2017 general election, Tim Farron has provided voters with a powerful reason not to trust his party this time either. And it might just sink them.