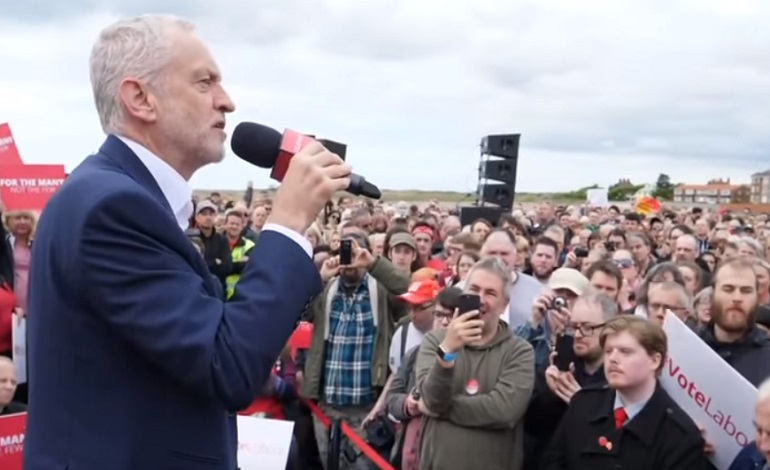 It was Jeremy Corbyn’s birthday on Friday 26 May. The Labour leader was 68 years young. But aside from well-wishers on social media, Corbyn got another birthday present. And this one was from the most unlikely of sources: UKIP.

Labour’s Mary Creagh is defending her seat of Wakefield in West Yorkshire. But in an unexpected move, a UKIP candidate has given his backing to her.

Lewis Thompson – UKIP’s candidate in the neighbouring Normanton, Pontefract and Castleford constituency – has given his support to Creagh, and “urged” people to vote for her. He told The Wakefield Express:

I’m urging the people of Wakefield to vote Labour. We can’t let the Tories get a huge majority.

But in contrast, the UKIP councillors in Wakefield have given their support to Conservative candidate Antony Calvert. As The Wakefield Express reported:

Ukip polled almost 8,000 votes in Wakefield at the last general election but has not put forward a candidate for the seat this time with the local party instead throwing its support behind Mr Calvert.

In 2015, Creagh won the seat with 17,301 votes; a share of 40%. But this only gave her a slim majority of 2,613 over her Conservative rival. And in the forthcoming election, Wakefield is the 27th of the Tories’ target seats. Creagh may also face opposition from the Lib Dems and the newly formed Yorkshire Party. The latter is standing 21 candidates across the region on a pro-Yorkshire slate with a devolved parliament as its main policy. Its Wakefield candidate Lucy Brown said:

At the moment, what [current] devolution offers is supremely dangerous for Wakefield being considered a suburb of Leeds. Leeds is an excellent hub for retail and business. However, Wakefield has much more to offer than just trying to copy that. The culture in Wakefield is fantastic.

The party also lists protection of greenbelt land, integrated health and social care, and investment in infrastructure among its policies.

It is unclear whether Creagh will have a comfortable victory, or if others will threaten her position. And there is obviously an issue of UKIP infighting here, too. But when even its candidates are coming out in support of Labour, you know that there is something seriously wrong with the Conservative Party and the way it has been governing.