Watch the most refreshing analysis of the election so far: Theresa May getting hammered on Gogglebox [VIDEO] - Canary 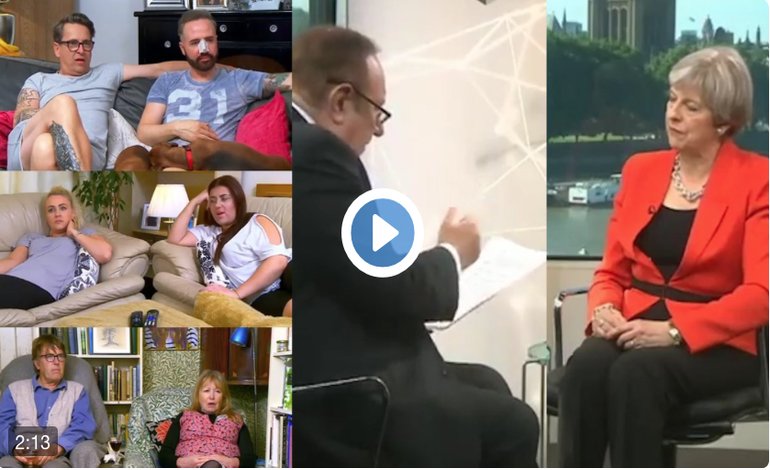 You might consider Channel 4’s Gogglebox a politics-free zone. But as Gogglebox families watched Theresa May being grilled by Andrew Neil on the BBC, it actually became the most refreshing analysis of the election so far. One-by-one, they tore the Conservative leader apart.

The Malone family were watching Theresa May from Manchester. As Neil pointed out the plummeting poll numbers, Tom Malone delivered his verdict:

I think she’s shitting a brick now. She called this election thinking she was a 100% certainty, and…they’ve not costed the election.

They’ve said a load of stuff, made a load of promises, not realizing people aren’t as stupid as they think and won’t believe everything they say.

When Neil moved onto May’s flip-flopping on the Dementia Tax, families shouted at the telly as May claimed “nothing has changed.” The Wirrall-based Woerdenweber family raised their hands to their mouths, while Mum Viv exclaimed:

It just goes to show they can say any old shite and they don’t have to come good on the deal.

Frustration drives Mary (of Giles and Mary) to imagine tying May to a chair with her own tights and forcing her to admit the u-turn.

Even the London-based Tapper family, traditionally conservative voters, expressed frustration with May’s performance. In fact, not one member of any of the families had a single positive thing to say on May or her manifesto.

Must watch: The most refreshing analysis of the election so far… Theresa May gets hammered by Gogglebox. #Ge2017 pic.twitter.com/r1HtlUp9MC

This look inside homes across the country gave a small insight into May’s failure to inspire voters. What began in some polls as an election expected to deliver the Tories double the vote share of Labour, has plunged to just a single digit lead in a matter of weeks. With two weeks of campaigning left, it is possible for Corbyn to deliver a major upset on 8 June. It will rely on voters seizing their moment.