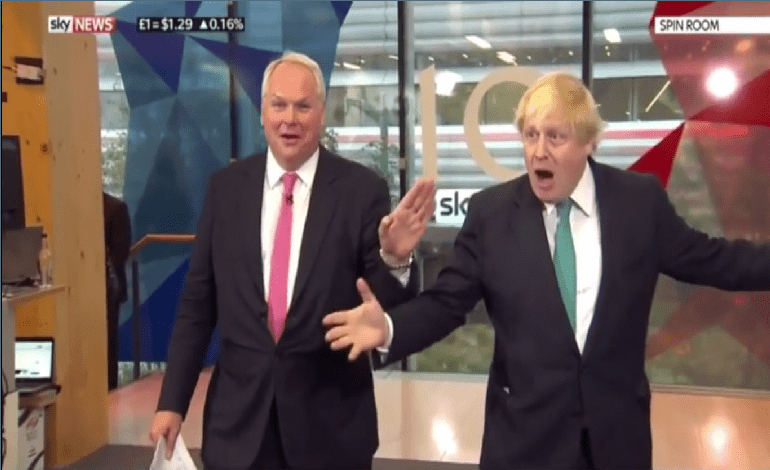 After realising Jeremy Corbyn might actually win this election, Boris Johnson lost it on national television. As the Conservatives’ lead crumbles in the polls, a visibly rattled Johnson began harassing Labour’s Andrew Gwynne in the Sky studio. Then, the Foreign Secretary shouted to no one in particular:

Don’t send Jeremy Corbyn to negotiate for us. They don’t have a clue what they’re talking about!

Boris, calm down. You’re an embarrassment.

Ahead of The Battle for Number 10, the Foreign Secretary was debating Gwynne (Labour’s election chief) on whether the party leaders should actually be having a head-to-head debate. But Johnson chose to ignore Sky host Adam Boulton’s question and began attacking Gwynne on a number of unrelated issues. At one point, Johnson looked directly at the camera in a seemingly desperate appeal to Sky viewers.

Johnson’s moment of madness came just as Labour has surged in the polls. Last week, the Conservatives backed out of their own post-Manchester campaign relaunch after a YouGov poll placed Labour on 38%. The result cut the Tories’ lead from around 20 points at the beginning of the campaign to just five.

Compounding the surge, a recent ORB poll also put Labour on 38%, while Survation placed the party on 37%. In short, an apparently ‘unelectable’ Labour leader has overseen a historic swing in the polls.

Meanwhile, two other recent surveys appear to weaken the party’s position. ComRes placed Labour on 34%, while ICM found the party trailing on 32%. But these companies are under-representing Labour’s support. Both ComRes and ICM are now weighting their polls against young people, the working class and other demographic variables. Because, according to recent history, these groups are less likely to vote. By contrast, other polling companies like YouGov are asking participants to say how likely they are to vote.

ComRes and ICM’s polling method will suppress Labour’s vote share. For 18-to-24-year-olds, Labour is 57 points ahead of the Conservatives. And generally, Labour has a strong lead among under-40s.

Seemingly freaking out over the remarkable Labour surge, Johnson lost the plot in front of the cameras. The Foreign Secretary looked like he couldn’t quite believe what is happening.

Eyeing favourable opinion polls, his government called a general election in the hopes of an increased majority. Now, it looks like that may backfire in the biggest political upset since WWII. And Johnson’s resulting on-air meltdown was priceless.