Someone put The Guardian's 36 most anti-Corbyn headlines all in one place. It's not pretty [IMAGES] 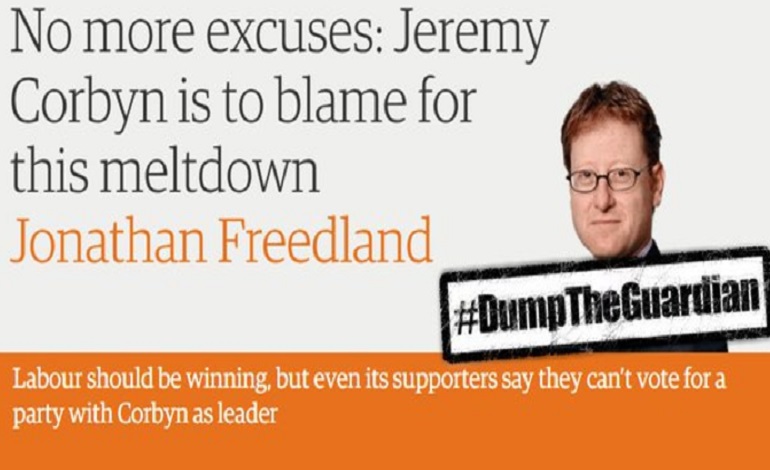 An apparent Jeremy Corbyn supporter has created a website detailing The Guardian‘s most anti-Corbyn headlines of the past two years.

The website, called Dump The Guardian!, gives 36 examples of times when the paper has run negative stories about Corbyn. Some of the examples featured include:

The articles included comment by regular Guardian columnists such as Jonathan Freedland, Polly Toynbee and Nick Cohen. And their opinions were often controversial.

Toynbee, for example, wrote a column entitled Dismal, lifeless, spineless – Jeremy Corbyn let us down again. Discussing the result of the EU referendum, she noted:

Jeremy Corbyn faces an immediate leadership challenge after a performance that was dismally inadequate, lifeless and spineless, displaying an inability to lead anyone anywhere. What absence of mind to emphasise support for free migration on the eve of a poll where Labour was haemorrhaging support for precisely those metropolitan views.

Cohen, meanwhile, penned a piece called Don’t tell me you weren’t warned about Corbyn, in which he warned:

Next year, as austerity grinds on, as we crash out of the EU to find ourselves with Donald Trump as our last ally, [the Labour Party] will run candidates against Corbyn and ask for your support. That will be the moment when you need to look at your country and ask whether this was what you wanted when you first cheered “Jeremy” on. In my respectful opinion, your only honourable response will be to stop being a fucking fool by changing your fucking mind.

And Freedland discussed how, a month before the election, Labour’s projected vote share was 27% in a piece called No more excuses: Jeremy Corbyn is to blame for this meltdown:

Blaming others won’t do. Instead, how refreshing it would be, just this once, if Corbyn and McDonnell put their hands up and took even a small measure of responsibility for this calamitous result. Instead of always playing the besieged victim, they could accept that, as Enoch Powell once observed, a politician complaining about the press is as absurd as a sailor complaining about the sea. Navigating a way through is simply what they have to do.

Oddly, all these columnists’ predictions appear to have been wrong. And as one social media user noted:

🎥 | The 'left liberal' Guardian's campaign against @JeremyCorbyn was as relentless as the right-wing Daily Mail & The Sun. Here's the proof: pic.twitter.com/HPOFNjjBgX

But The Guardian‘s open criticism of Corbyn runs deeper than a few opinion pieces. As The Canary previously reported:

On Tuesday 9 May, The Guardian published an astonishing yet predictable editorial regarding its opinion of the two main party leaders. And it was unequivocal in its conclusion: Theresa May, good; Jeremy Corbyn, bad.

To be fair to the paper, it has some consistently pro-Corbyn voices like Abi Wilkinson and Ellie Mae O’Hagan. And regular columnist Owen Jones has flip-flopped from supporting Corbyn to not; but he came out recently and apologised for doubting the Labour leader, saying:

I owe Corbyn, John McDonnell, Seumas Milne, his policy chief Andrew Fisher, and others, an unreserved, and heartfelt apology.

This does not fully detract from the paper’s overly negative coverage of Corbyn. But it is worth noting the paper is also suffering financial difficulties. The Guardian‘s readership has fallen by 3% year-on-year. And on Sunday 11 June, news broke that its print edition will be turning into a tabloid design to save money. So it may be that the paper is intentionally trying to be ‘middle-of-the-road’ to appeal to as broad a readership as possible. In doing so, however, it has alienated much of its left-wing support.

You sometimes have to wonder whether The Guardian’s columnists live in the same world many of the rest of us do. And one tweet by freelance columnist Jane Merrick perhaps sums this up best:

You can hate her politics & be glad she's lost her majority but we should remember the tough week May has had, & ask whether we could do it

I'm sure the 4 million children living in poverty & the 90 people a month who die after being declared 'fit-for-work' are shedding a tear. https://t.co/OinqB4mogQ