As Theresa May announces austerity is over, James O'Brien pulls apart the bullshit about it from her and the media [AUDIO] - Canary 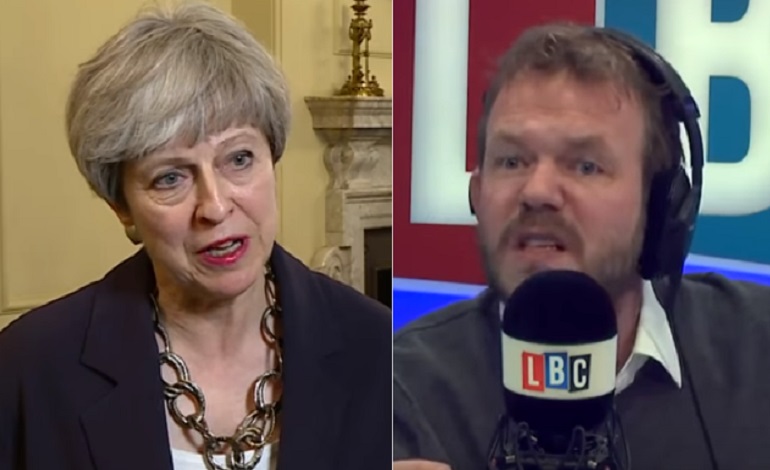 Theresa May has announced that a Conservative government will look at ending austerity. But while the mainstream media reported that it signalled the party responding to “public concerns”, LBC host James O’Brien took the press, and the Tories, to task over the cuts of the past seven years.

“Rearranging the deckchairs on the Titanic”

O’Brien was discussing both May’s announcement that there may be a halt to public sector cuts, along with the news that inflation has risen to 2.9%. And he was also talking about it in the context of Brexit. The LBC host said that:

We’re still in this weird, delusional denial that… it’s all going to be fine. Why are we in a weird, delusional denial that everything is going to be fine? Because those newspapers kept telling us. And yet, for a significant swathe of the nation, utterly unrepresented by mainstream media… these conversations must sound like we’re rearranging the deckchairs on the Titanic.

He then went on specifically to take the media to task over its reporting of the past seven years:

I think that billionaire newspaper owners… encourage an editorial line in their newspapers that benefits billionaire media owners more than anybody else. But, of course, they dress it up as us being on the winning side:

‘Look, here’s a really unfair system but you’re going to be one of the beneficiaries of the unfairness so what do you think of unfairness now?’

‘Ye-hay! More unfairness! I’m on the winning side!’

Yeah. But there’s even less now…

He then went on to make a salient point about May:

I find it despicable… for a politician who was Home Secretary throughout that period of austerity to now say ‘Oh yeah, we’re going to try something else now’… And George Osborne is still grinning in the Editor’s office over at The London Evening Standard.

May’s Tories: a history of violence

It is worth remembering that, since the Tories first came to power in the 2010 Coalition government:

In a gradually heating bath tub, you’d be boiled to death before you knew it

O’Brien concluded by saying that:

I reckon the disability benefits cuts will, to historians of the future, look positively Victorian in their callousness. And we’ve spoken about it, what, together – three, four times? It’s pathetic. I’ve let you down and I’m very sorry.

But the LBC presenter is probably being too harsh on himself. Because while he has been an honest and open commentator on the failings of the Conservative government, much of the media should bear some responsibility for the suffering of the past seven years. Sadly, with the Tories’ now apparent ‘softening’, our ‘free’ press will probably try and sell that to us as something positive as well. We have been warned:

On #EmpathyDay should we be feeling empathy for the likes of Theresa May, who had a 'hard' week, last week? Please nb from #TheHandmaidsTale pic.twitter.com/FJa1qMZoNh