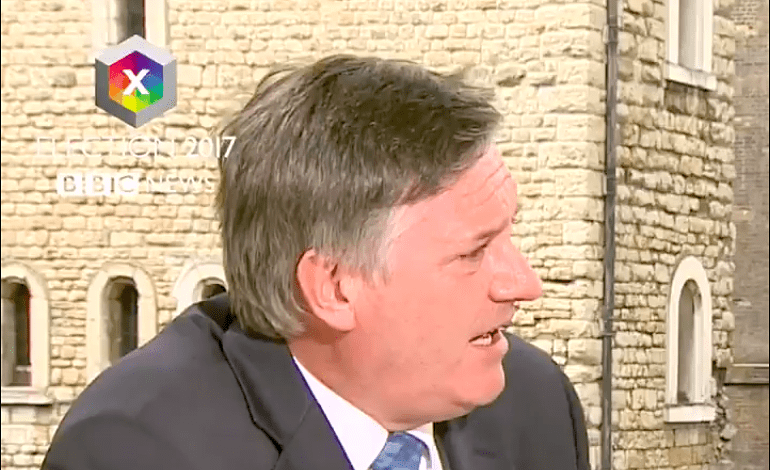 A BBC presenter gets noticeably irate after pressing a Conservative MP on whether Tory back benchers will give their backing to Theresa May. Because the Tory’s response was a clearly rehearsed speech that tried to churn out the tired ‘strong and stable’ mantra the whole country is sick of. And at present, that is a status we can all agree we are very far from.

The robotic response by MP for Havant Alan Mak, particularly after declaring the Tories’ priority was to form a “strong and stable” government, led BBC News presenter Simon McCoy to berate him:

Oh, are you really still saying ‘strong and stable’?

With a split second of hesitation, Mak just continued: “Well our job is to provide certainty… it’s been a tumultuous election period”. But McCoy interrupts him again:

I’m sorry to laugh, but we’re in a country where if you talked to anybody at the weekend, people are quite worried. Three words you will not have heard were ‘strong’, ‘stable’ and ‘certainty’…

But Mak doesn’t break with script and continues:

Well I think we have come through… a tough election period. I’ve said we’re disappointed by the fact we didn’t get a majority. But our objective now is to make sure we govern in the interest of the whole country. Put aside our party interest. We’ve got to analyse where things went right, and where things went wrong. But what’s important is we get off to a good start with the Brexit negotiations, govern in the national interest. We’ve had the cabinet confirmed and we’re looking forward to making sure we put our best foot forward and get a good deal with the DUP as well.

The Tory MP did not impress McCoy. So he asked Mak if the party had given him a speech to read out. Sounding “very formulaic”, it clearly didn’t represent the atmosphere in Westminster. But despite this, Mak continued spouting the protocol, driving McCoy to his wit’s end:

Watch @BBCSimonMcCoy's reaction when Tory MP @AlanMakHavant tells him the @Conservatives are going to form a "strong and stable" government. pic.twitter.com/15I7JcGU5R

With the current limbo the country is in, repetitive and robotic statements are all that May, and some of her party, know how to do. Since the Tories’ failure to achieve a majority, the future of the country has been in the balance, frustrating efforts to start Brexit negotiations, for which the timeline is tightening.

A Tory deal with the Democratic Unionist Party (DUP) has not been finalised, delaying delivery of a Queen’s speech. We have no idea what concessions the DUP want, other than speculation. But the controversial alliance has caused protests (with more planned); as well as a petition to stop the alliance going ahead.

Party ahead of country?

Backbench MPs appear to be supporting May as she appeals for their backing. But there is still a sense that May is undoing her ‘mess‘ for the sake of the Tory party rather than the country.

In any case, May’s Queen’s speech will most likely abandon some of the castigated policies of the Conservative manifesto. And it may try to appeal more to the part of the electorate that appreciated the Labour manifesto.

Labour, meanwhile, is ready to vote down May’s Queen’s speech, and will have an alternative one ready. Corbyn believes it could be a matter of months before he is PM. If not by a minority government, which is wholly possible, then by a general election. With a DUP alliance inevitably meaning further friction and more fissures within the Conservative Party, particularly on the direction of Brexit, this could be on the cards.