On the first day back at parliament, Corbyn was absolutely on fire. May was not. [VIDEO] - The Canary 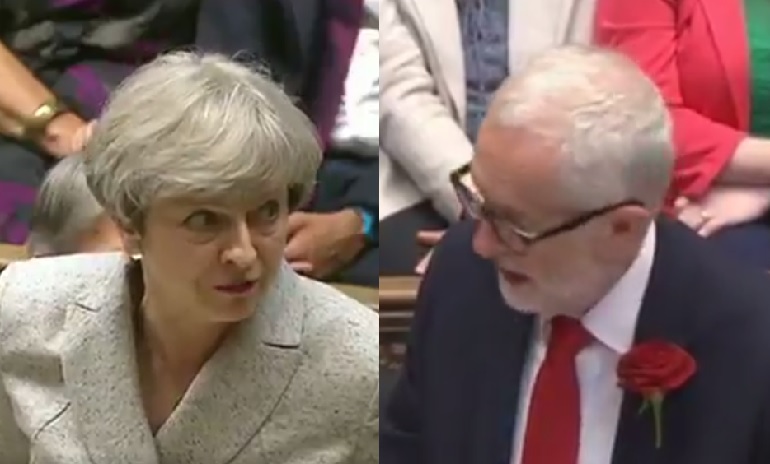 On the first day back at parliament after the 8 June election, Labour leader Jeremy Corbyn was absolutely on fire. And while Conservative leader Theresa May struck a slightly different tone from the one which characterised her general election performance, it was Corbyn who appeared to enter the House of Commons with real momentum behind him.

Corbyn told May that he looked forward to hearing the Queen’s speech “just as soon as the coalition of chaos has been negotiated”. He then appropriated the Conservatives’ main campaign phrase when saying:

I’ll just let the house and the rest of the nation know that, if that’s not possible, the Labour Party stands ready to offer strong and stable leadership in the national interest.

The Labour leader was clearly riding a wave of good vibes after his party shocked pundits by making significant gains in the 8 June election.

Corbyn congratulates Ken Clarke for being Father of the house, and goes on to describe the Tory coalition of chaos… #Parliament pic.twitter.com/IaNAVL7s3M

Theresa May, on the other hand, offered the same old platitudes (including a pledge to “build a stronger, fairer and more prosperous future”). Precisely the kind that many people in Britain will be tired of hearing after seven years of Tory austerity and U-turns. She did, however, have just enough good humour to make a quip (albeit in a rather forced manner) when congratulating John Bercow on his re-appointment as Speaker of the House, saying:

At least someone got a landslide.

PM Theresa May congratulates Speaker-elect John Bercow on his election. "At least someone got a landslide," she says https://t.co/nUBnAnVrjj pic.twitter.com/66z7acqkiQ

Overall, though, it was Jeremy Corbyn and the Labour Party that entered parliament in a buoyant mood. So much so that Labour MPs welcomed Corbyn with a standing ovation:

Jeremy Corbyn is applauded by Labour MPs as he returns to the Commons for the first time since the election. https://t.co/e6Ny2sEPhs pic.twitter.com/UWS1DVLZHU

A reception that one Corbyn supporter on Twitter mixed with the soundtrack which often greeted the Labour leader on the campaign trail:

The challenge now for Corbyn’s Labour is to make that momentum count.