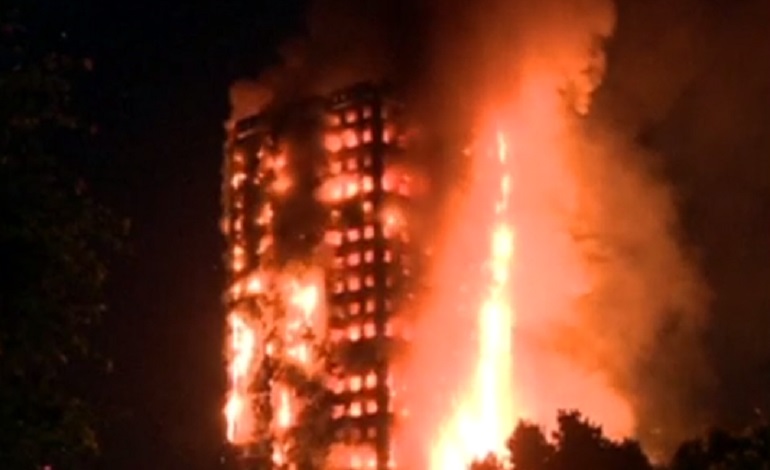 The landlord in charge of Grenfell Tower, where a fire broke out in the early hours on Wednesday 14 June, had been issued legal warnings over fire safety in two other tower blocks prior to the blaze that engulfed the West London property.

The Royal Borough of Kensington and Chelsea Tenant Management Organisation (KCTMO) is the landlord of Grenfell Tower. The 24-storey tower block with 120 flats was reported to be on fire at 12.54am on Wednesday 14 June. At the time of publishing, 50 people had been taken to hospital and six people had been confirmed dead.

But this is not the first fire in a KCTMO-managed tower block. Because the London Fire Brigade (LFB) had previously issued it with two legal enforcement notices over fire safety, as a result of another fire.

In October 2015, a fire broke out in Adair Tower and 50 people had to be rescued from their flats. As a result, LFB issued an enforcement notice not only on Adair Tower but on the neighbouring Hazelwood Tower. And it shows a catalogue of failings.

A catalogue of failings?

The LFB notice said KCTMO had shown a:

A similar notice was issued for Hazelwood Tower. KCTMO said in its company accounts [pdf p4] that it had:

actioned the works required as a result of the [enforcement] Notice with all due to be completed by September 2016… The works required for Hazelwood Tower are being actioned in parallel to the Adair Tower works.

KCTMO completed the work in November 2016, 11 months after the LFB issued the warning. But the local residents’ association was not happy with the safety of Grenfell Tower. As a blog post noted in November 2016:

It is a truly terrifying thought but the Grenfell Action Group firmly believe that only a catastrophic event will expose the ineptitude and incompetence of our landlord, the KCTMO, and bring an end to the dangerous living conditions and neglect of health and safety legislation that they inflict upon their tenants and leaseholders. We believe that the KCTMO are an evil, unprincipled, mini-mafia…

And prior to this, the same blog site claimed to have received an internal KCTMO report which raised concerns about the safety of Grenfell Tower. In 2013, it said:

[An external contractor] provide[s] [all fire safety equipment]. The last test date was on the 8th August 2011. Some located in the roof level areas had ‘condemned’ written on them in large black writing with a last test date of 2009 or 2010. This seems to indicate that monthly occupier inspections are not being carried out.

The blogger responsible for the post was allegedly subject of a letter from Kensington and Chelsea Council in 2013:

The large scale works included the installation of insulated exterior cladding, new double glazed windows and a new communal heating system. All of this will greatly enhance the energy efficiency of the building.

Resident Peaky Saku told the BBC‘s Victoria Derbyshire show that KCTMO put “shoddy plastic things” on the exterior of the tower that “set up alight”. And he says it was because “they want more reasons to knock these blocks down”:

Clearly something’s gone wrong – there should be safe, smoke-free access up to the highest floors and internal water supplies for firefighters.

Councillor Nicholas Paget-Brown said that a “thorough investigation” into the fire was needed, but that it was a”matter for the London Fire Service”. A spokesperson for the council said:

At present all our focus is on supporting the rescue and relief operation.

The cause of the fire will be fully investigated and we will keep people informed and this page will be updated throughout the day.

The Canary contacted both the council and KCTMO for further comment, but none was received at the time of publication.

The Canary will be providing updates on the situation at Grenfell Tower throughout the day.