Theresa May says it's okay to be friends with extremists. After all, she is! - The Canary 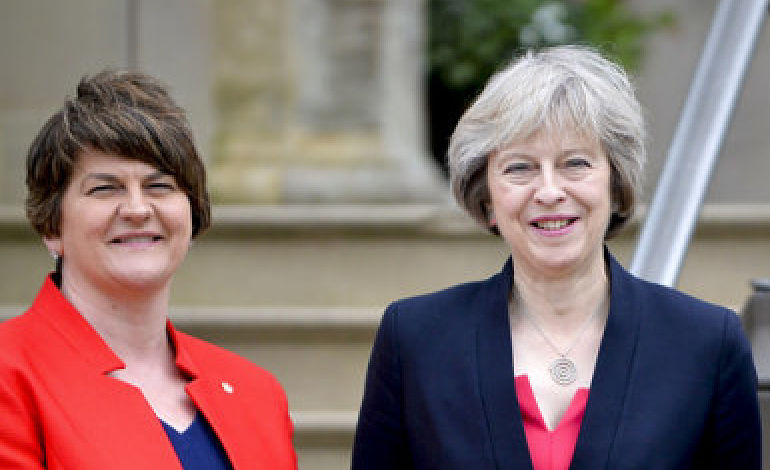 What happens to paramilitaries when their organisations disband? Some become politicians, some community leaders, and others turn to more traditional crime. Or maybe even a combination of all three.

Reports have emerged about how the UDA is nothing less than a “brutal money-making machine hooked on violence”. The reports allege racketeering and money laundering activities, with an estimated £20,000 a week extorted from the UDA’s 2,000 members in just one area.

But the serious money comes from DUP-organised funding of UDA-backed projects.

One such project is administered by the £1.7m funded community group Charter NI, headed by UDA brigadier and convicted armed robber Dee Stitt. And in 2016, a further £900,000 was provided to a local sports project run by Stitt.

And claims of links to paramilitaries:

Both DUP co-founders Peter Robinson and Ian Paisley prominently associated themselves with paramilitary organisation Ulster Resistance (UR) and attended its 1986 launch. Two years later, a model of the ‘Blowpipe’ missile aiming simulator was stolen from Shorts Brothers factory in Belfast. Noel Little, Samuel Quinn and Jim Long were arrested in Paris in connection with the theft. They planned to swap the simulator for cash or arms from South Africa. The three were all members of Ulster Resistance,

And in 2016, the Police Ombudsman concluded that UR smuggled weapons for loyalist terrorist groups, such as the UVF and the UDA. A report states that UR colluded with terrorist groups to import guns, used in at least 70 murders and attempted murders.

Where crime and politics blur

The overall picture that emerges of Northern Ireland is of a society where politics and crime are closely intertwined. And where politicians and former terrorists are often indistinguishable.

The Conservative Party now seeks to get into bed with the DUP. Even though there are many outstanding questions regarding its links to terrorists. And this does not bode well, for it sends out the wrong signals to extremists everywhere.