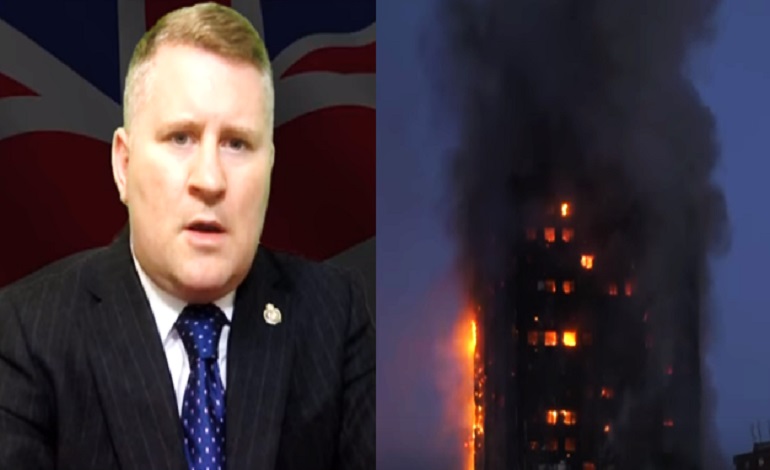 Far-right campaign group Britain First has been accused of intentionally “provoking” the Muslim community that was trying to help victims in the wake of the Grenfell Tower fire. And its leader Paul Golding appears to have been trying to score cheap political points from the tragedy, which has so far claimed the lives of at least 12 people.

On Wednesday 14 June, Britain First was reportedly filming a campaign video outside the East London Mosque near Whitechapel. Muslims had arrived at the centre for midday prayer and to collect donations for the victims of the Grenfell Tower fire. But a video has emerged showing Golding saying:

In another video, he says:

It’s time we took our country back, otherwise the whole country is going to be like East London.

This video shows them breaking British traffic laws parking on a zig-zag next to a pedestrian crossing and blocking the entire cycle lane! pic.twitter.com/1Bio0FefGE

While Muslims are helping victims of #GrenfellTower fire #BritainFirst were outside East London Mosque doing one of their propaganda videos. pic.twitter.com/dVxBeVbbSn

The group appeared to be making a film about the London Bridge and Borough terrorist attacks, as convicted criminal Golding said the perpetrators “were from this area”. But when a passer-by criticised his actions, he called her “a white liberal”. And the Kent-born leader of Britain First also said that those opposing him were “not welcome here”.

I said: whose country?

He went on to film a piece afterwards, in which he claimed his group was “surrounded by an ever-increasing mob of Muslims and white liberals screaming abuse”:

We had things thrown at us, we had people spit at us and this was for the heinous crime of standing on a British pavement and filming. That’s all we did… Whose country is this?

The above video appears to back up Golding’s claim that “things” were “thrown” at him. As you can specifically see a leaflet being chucked in his direction. There is no evidence, however, that Britain First members were spat at.

It’s unclear when Golding said the “whole country” will be “like East London”, if he meant that Muslims across the UK would rally to help the victims of a devastating fire, or not. Because stories have emerged on social media of the community doing exactly that:

"If it wasn't for all these young Muslim boys around here, helping us, coming from mosques, people would have been dead." #GrenfellTower pic.twitter.com/JH9geBpMdx

This is not Britain First’s country

The fire at Grenfell Tower, a tower block containing 120 flats, has so far claimed the lives of at least 12 people. But authorities are warning that the number of dead will probably rise, with no more survivors expected to be found.

It’s during the most tragic of times like this that multiculturalism in the UK comes into its own. And it demonstrates just what a wonderful thing a multi-colour, multi-faith Britain is. But there are always a few twisted individuals who seek to undermine that for their own supremacist agenda. And invariably, Britain First is at the centre of it. The group’s name couldn’t be less fitting if it tried.