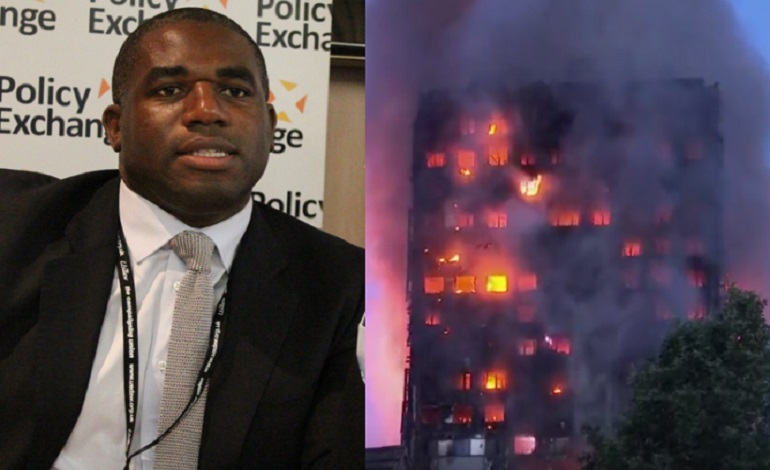 A Labour MP who has family friends still missing in the wake of the Grenfell Tower fire has called the incident “corporate manslaughter”. And he told the BBC that “there should be arrests made”.

On Thursday 15 June, MP for Tottenham David Lammy was interviewed on BBC Radio 4‘s Today programme. The host asked Lammy whether the tragedy was anything to do with the “social divides” between rich and poor that exist in a borough like Kensington and Chelsea. And Lammy was unequivocal in his answer:

Lammy’s “dear” friends, 24-year-old photographer Khadija Saye and her mother Mary Mendy, are still missing after the fire ripped through the 24-storey tower block in the early hours of Wednesday 14 June. He described Khadija as:

A beautiful young woman with an amazing career ahead of her; wonderful artist… and we’ve heard nothing. And obviously as the seconds pass we grow more… more sad and bleaker every second, really… We’ve been calling the hospitals but I know from my own experience after the London riots that people will be in hospital with no belongings, many of them will be unconscious… we hope and pray that she is amongst them and not perished in that building as I suspect hundreds will have done by the end of this count.

A catalogue of failings?

The fire at Grenfell Tower, a tower block containing 120 flats, has so far claimed the lives of 12 people. But authorities are warning that the number of dead will probably rise, with no more survivors expected to be found.

The cause of the fire is as yet unknown. But speculation points to the cladding that the landlord, Kensington and Chelsea Tenant Management Organisation (KCTMO) recently installed on the block, which experts link to other fires around the world. And as The Canary previously reported, the London Fire Brigade previously issued KCTMO with two legal enforcement notices over fire safety failures. But these were for two different tower blocks.

Residents claim they had been warning KCTMO about their safety concerns for years. As a blog post noted in November 2016:

It is a truly terrifying thought but the Grenfell Action Group firmly believe that only a catastrophic event will expose the ineptitude and incompetence of our landlord, the KCTMO, and bring an end to the dangerous living conditions and neglect of health and safety legislation that they inflict upon their tenants and leaseholders. We believe that the KCTMO are an evil, unprincipled, mini-mafia…

The Canary contacted both KCTMO and Kensington and Chelsea Borough Council for comment. KCTMO had not responded at the time of publication. A Council spokesperson said:

We have heard a number of theories about the cause of the fire at Grenfell Tower. All of these will be thoroughly investigated as part of the formal investigation which has already begun.

Tragically now we are not expecting to find anyone else alive. The severity and the heat of the fire would mean it is an absolute miracle for anyone to be left alive.

The Canary will continue to bring you updates on the Grenfell Tower tragedy.