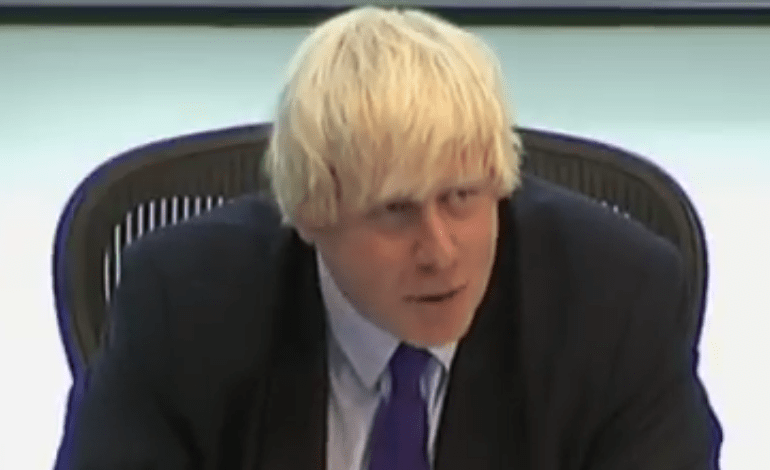 32 seconds of footage have returned to hound Foreign Secretary Boris Johnson after the Grenfell Tower fire. Johnson was responding to a line of questioning from London Assembly member Andrew Dinsmore about cuts to emergency fire services. Johnson, who was Mayor of London at the time, replied:

Boris Johnson, then Mayor of London, telling London Assembly member to 'get stuffed' in response to questions on cuts in fire service, 2013 pic.twitter.com/SUiwN4LzaF

At a Mayor’s Question Time session in City Hall, Labour’s Dinsmore was asking:

The MP for Uxbridge replied vaguely:

Theresa May faced intense criticism for her deep cuts to policing following the terrorist attacks during the general election. Now, the Conservatives’ cuts to fire services are under scrutiny after the 24-storey fire at Grenfell Tower. The tragic events are still unfolding, but at least 17 people have been confirmed dead at the time of publication.

Tory cuts in London resulted in ten fire stations closing, three of which were in the area of Grenfell Tower. In the UK as a whole, 10,000 firefighters – one in six – have been cut since the Conservatives came to power in 2010. The Conservative-Liberal Democrat Coalition cut fire and rescue funding by 30%.

We have consistently said to both the coalition and also the Conservative government that you need to invest in the fire and rescue service. Our members will attend anything they are asked to attend. But we are constrained by our ability, by numbers, by resources

Green argued that the Conservatives want to privatise the fire service:

The Service is seen as an area ripe for privatisation by those who look to make money out of taking essential services out of public ownership… We have already seen the privatisation of certain parts of the service and there is no sign that they are content to stop there. This piecemeal privatisation puts lives at risk. History tells us that Tory governments deliberately run down industries to make them open to unscrupulous privateers, their friends, to pick over the profitable bones of the carcass. The rest is left to rot.

there is a standard technique of privatisation, namely defund what you want to privatise. Like when Thatcher wanted to defund the railroads, first thing to do is defund them, then they don’t work and people get angry and they want a change. You say okay, privatise them.

Under the Conservatives, we have seen Margaret Thatcher’s legacy of privatisation of our essential services, like the NHS, rampantly continue. We still need to use these services, so end up renting them back at a higher cost from already rich shareholders.

For Chomsky and Green, it’s vital to the privatisation agenda to remove the public money these services need to survive. When challenged on such dangerous defunding, Johnson told a fellow politician to “get stuffed”. Now, at the Grenfell fire, some firefighters have said cuts have taken a serious toll on operations.

Speaking about Johnson, LBC host James O’Brien pointed out “it really is a game for some people”. Indeed – a disgraceful attitude from the sitting Foreign Secretary.