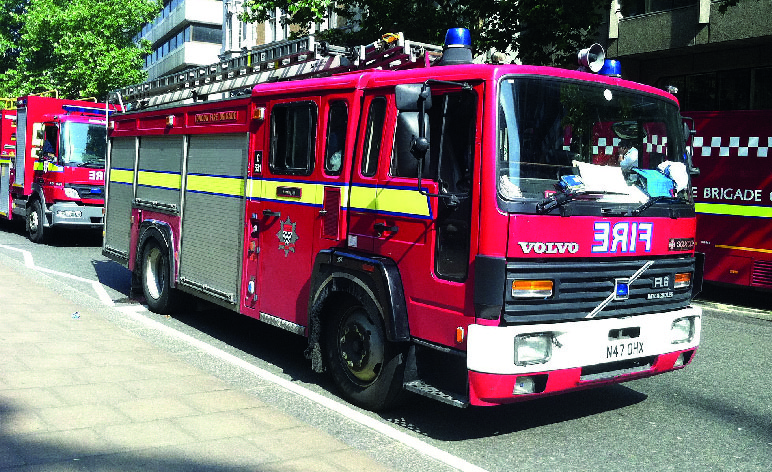 There have been many responses to the fire at Grenfell Tower. Some have argued that it should not be ‘politicised’. Some have said that you cannot separate it from the numerous warnings that politicians have received. Others that it isn’t an unforeseen tragedy at all, but a case of corporate manslaughter.

Some people, meanwhile, have argued that not cutting fire services would have been a tragedy.

The former Mayor of London, Boris Johnson, sent “thoughts and prayers” to the victims of the Grenfell Tower fire. This led to people sharing a video in which Johnson told a London Assembly member to “get stuffed” after he was branded a liar for claiming that reducing the number of firefighters and fire stations did not constitute cuts:

Boris Johnson, then Mayor of London, telling London Assembly member to 'get stuffed' in response to questions on cuts in fire service, 2013 pic.twitter.com/SUiwN4LzaF

Responses among firefighters on the ground about whether cuts affected their ability to operate have been mixed, according to The Guardian. Some reported that they could not speak freely, but that cuts have taken, as The Guardian put it, a “serious toll on operations”. Suggesting they’ve been stretched thinly while fighting this fire, one firefighter said:

Put it this way, you’re meant to work on a fire for a maximum of four hours, we’ve been here for 12.

One of the people to call Johnson out on his comments was LBC radio presenter James O’Brien. And among the many respondents was Lance Forman. A man who has worked as both a banker and special adviser to the ex-Tory MP Peter Lilley, and is a current business operator. He tweeted: 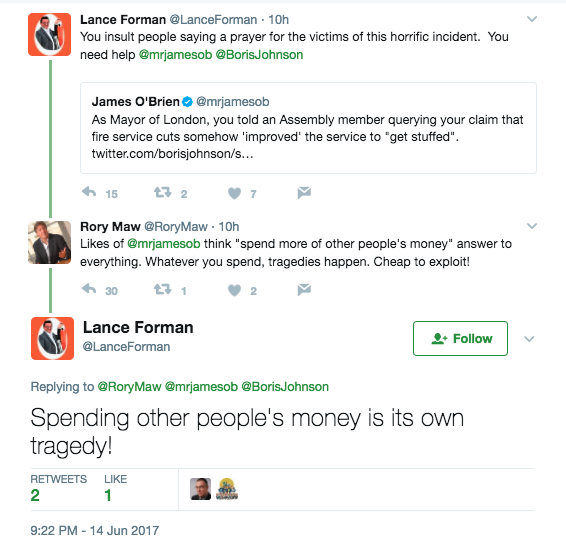 Forman defended his position while simultaneously trying to shift it: 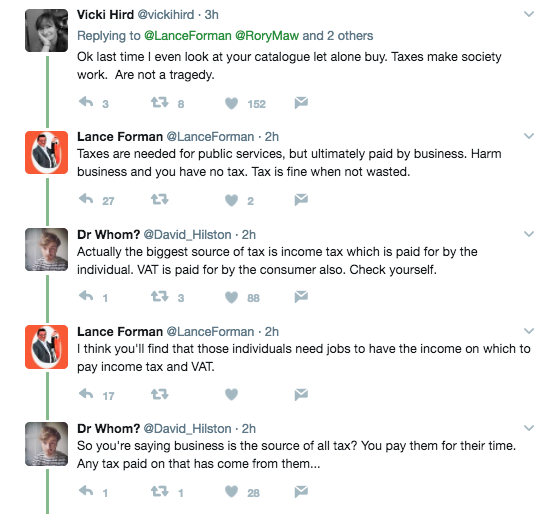 There’s nothing inherently wrong with Forman’s argument that waste is bad. Except that it’s in response to what happened at Grenfell Tower. An event which has already shone a light on instances of funding cuts to fire services; on the government failing to act on damning reports; and on the council failing to listen to residents. And as it’s to this event that Forman is responding, it’s impossible to read his comments without taking them to mean that the government was wise not to waste “other people’s money” on these issues.

Lance Forman is not an important or particularly notable person. His opinion seems to be in the minority. But the things that he’s said typify the sort of attitude that has become normalised in Britain. That we should be dubious of any public spending because it’s likely to be wasteful. That we should let businesses call the shots, because they know what they’re doing. And that if it wasn’t for the rich, the poor would have nothing.

There has been a seismic shift in UK politics. Because of it, people are beginning to see that they’ve been conned. And people like Forman are speeding that up by showing us how the corporate class really see the world.

– You can also support us here if you appreciate what we do.