Rapper Akala smashes the biggest lie about the Grenfell disaster, for the whole country to see [VIDEO] - Canary 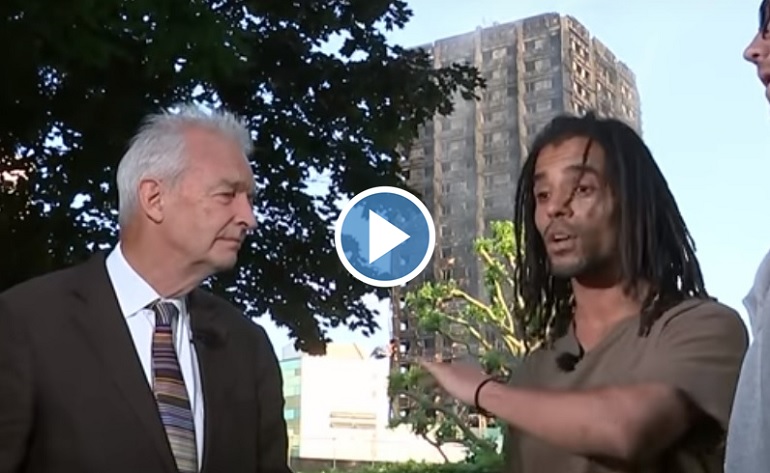 Many commentators have sought to avoid speculating about the causes of the horrific Grenfell Tower fire on 14 June. Others have argued that the tragedy was ‘not political’. But that’s a myth. And it’s one that rapper Akala absolutely demolished in an interview with Channel 4.

At the time of writing, police have confirmed that at least 17 people died in the fire. And they expect that number to rise.

Jon Snow then pointed out:

What’s so curious is that £8m has been spent refurbishing this place.

To which Akala responded:

The award-winning musician was referring here to exterior “cladding” that the landlord, Kensington and Chelsea Tenant Management Organisation (KCTMO), had installed in 2015. A cladding which experts have linked to other fires around the world.

Akala has been active on Twitter in the wake of the Grenfell Tower disaster. In particular, he has been directing people to learn more about how residents’ requests and concerns in the past had reportedly fallen “on deaf ears”.

He has also been highlighting the role of Conservative austerity in worsening Britain’s already chronic housing crisis:

If you still don't understand that neo-liberal austerity is literally a matter of life and death you are sleeping. #Grenfell

Anyone who knows the area knows council/developers been trying to get rid of this overwhelmingly poor, multicultural community for years…

The key point of this argument, however, came in Akala’s interview with Channel 4. As he said, the people who suffered in the Grenfell Tower tragedy were not only victims of a fire. They were also victims of poverty. This is the truth of the matter, and there’s no way to avoid it.

And that should be a wake-up call for all of us.

– See more from The Canary on the Grenfell Tower fire here.