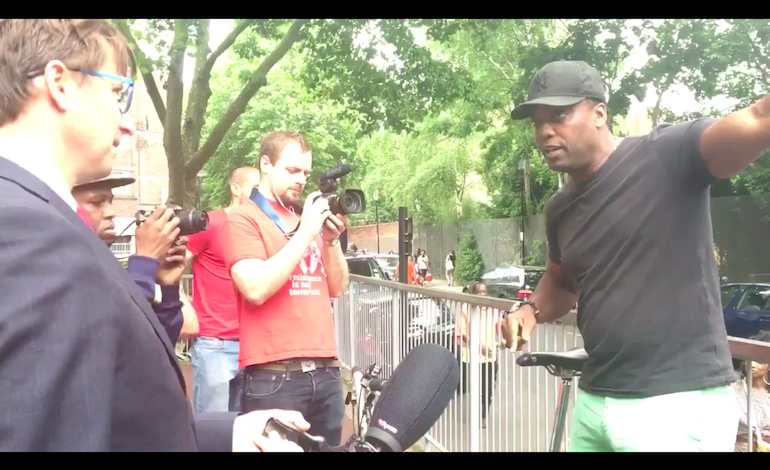 Media reporters tried to interview Kensington resident and writer Ishmahil Blagrove about the Grenfell disaster. But Blagrove didn’t just speak his mind about Grenfell, he also dropped some home truths about the mainstream media.

I want it to be a revolution in this country. I say fuck the media, fuck the mainstream, you don’t deserve to be there… We should be campaigning not to government, but to the BBC who act as mouthpieces for this corrupt government…

We’ve seen how you in the mainstream media have responded and reacted. For two years, you’ve hounded, demonised Jeremy Corbyn. And you said he was unelectable… And you created that narrative, and people actually believed your bullshit – for a while. But what this election has done is shown that people are immune: they’re wearing bullet-proof vests to you, and the other billionaires of the media owners and Rupert Murdoch and all the motherfuckers.

He received cheers and applause from bystanders:

Ishmahil Blagrove had some strong words for the mainstream media outside #grenfelltower and everyone cheered. pic.twitter.com/ze1PoFz5zz

“The marginalised, the disenfranchised, the voiceless”

The average property price in this area is £1.2m. Who do you think can buy it?… You think any of your rich white man is going to buy a property in Grenfell Tower?

“We’re not going to be dismissed”

He also said “where the crisis in this country is coming from”:

The marginalised, the disenfranchised, the voiceless people are not heard and… you have to have a certain income, or to be connected to certain people, before you are even heard.

Blagrove then turned his attention to the media:

You’re down here and it’s just some sort of feeding frenzy, for you to sort of get a new sensational story… This is a reality that people need to live here day in day out.

He went on to warn:

Do not treat this community as some ignorant, low-IQ community… We’re not going to be dismissed with hollow platitudes… People should be held accountable, people should be in jail for this. But I very much doubt we will get that with this corrupt government.

“Mouthpieces of this government”

It was the mainstream media, he said, that was validating the Conservative government:

Ishmahil Blagrove, we salute you. There is nothing left to add.

You can watch the whole interview here:

– Read The Canary‘s coverage of the Grenfell Tower disaster.