When the Prime Minister has to flee the public, you know it's time for her to go [VIDEOS, OPINION] - The Canary 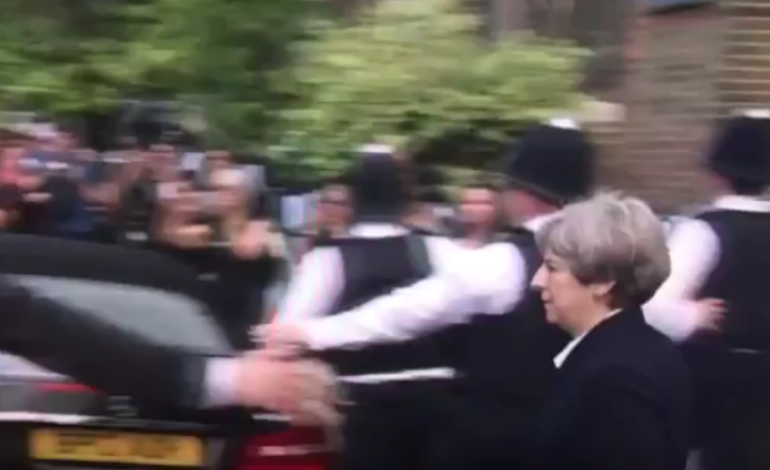 The Grenfell Tower fire is likely to have caused more deaths than the 7/7 terrorist attack. And it is a tragedy that may well come to symbolise the years of Tory cutbacks and austerity measures.

But it wasn’t just a lack of empathy that deterred Theresa May from meeting locals on the streets. It was guilt. And on 16 June, when the Prime Minister finally found the courage to visit an aid centre near the burnt out tower, the sheer anger of the residents could no longer be contained. Like a third world dictator, who instinctively knows their time is up, May was unceremoniously bundled by police into a car, to flee the scene. It is an image that no one will forget.

I genuinely believe May could resign within the week.
This is not sustainable. pic.twitter.com/IAPazcd8Kj

A prime minister without empathy

May’s reluctance to meet the public on the streets is true to character. In the immediate aftermath of the fire, May failed to attend the scene, citing “security concerns”. Instead, she talked with a small number of police and firefighters, out of sight of TV cameras. In contrast, Labour leader Jeremy Corbyn met with local people on the streets, talking and sympathising with survivors and family members of those who died or are still missing.

The difference between the two leaders could not have been starker:

Also on 16 June, May finally announced that £5 million would be made available to the residents to help them re-organise their lives. That sum is, arguably, a pittance.

On the same day, hundreds of angry locals converged on the offices of Kensington and Chelsea Council, who own Grenfell Tower.

That evening, the residents and their supporters also marched on Downing Street:

Later that evening, May was interviewed on BBC Newsnight. The interviewer told May that people considered her a “coward” and that she had “misread the public mood”. May’s response was predictable: scripted answers, repeated over and over again. And downright lies.

May announced that a public inquiry would be set up to look into how the fire happened. But inquiries take months or even years to report back. What the Grenfell residents and residents of 4000 other tower blocks require is immediate action to assess the inadequacies of high-rise blocks and what corrective measures will be needed.

The police also announced that a criminal investigation has been initiated. It will presumably look into the actions of the landlord, Kensington & Chelsea Tenants Management Organisation (KCTMO), as well as the council. And it will also presumably examine the work of the contractors who organised or carried out refurbishments on the tower block.

And there are many outstanding questions.

For example, why following a fire at Lakanal House in South London in 2009, where six people were killed, did Gavin Barwell (then Housing Minister and now May’s Chief of Staff) announce a review of regulations, only to then do nothing and kick the review into the long grass? And why did Tory MPs reject an amendment to a bill that would require private landlords to make their homes safe and “fit for human habitation”? And why was KCTMO repeatedly warned about fire dangers in tower blocks but did nothing?

Concerns were also raised about the gas pipes in the main stairwell as it appears they were not boxed in with “fire-rated” protection. And there were four years of warnings, over fire hazards by the Grenfell Action Group (GAG). But these were ignored. In fact, in 2013, the Council threatened legal action against GAG. Nor did the cuts in legal aid help.

The fire service will want to investigate how the fire began and why it spread so easily. For example, why:

Already there has been a call by Labour MP David Lammy for corporate manslaughter charges to be considered.

Only a week ago, May’s former Cabinet colleague, George Osborne, described the PM as a “dead woman walking”. And with the sight of May fleeing people still grieving from the loss of their loved ones, that caricature is now even more apparent.

May has surely lost whatever credibility she believed she had.

It is time for her, and her party, to go.

– Join the Million March on London on July 1st