3 housing luxuries the Tories charged to the taxpayer, instead of making ordinary homes safe - The Canary 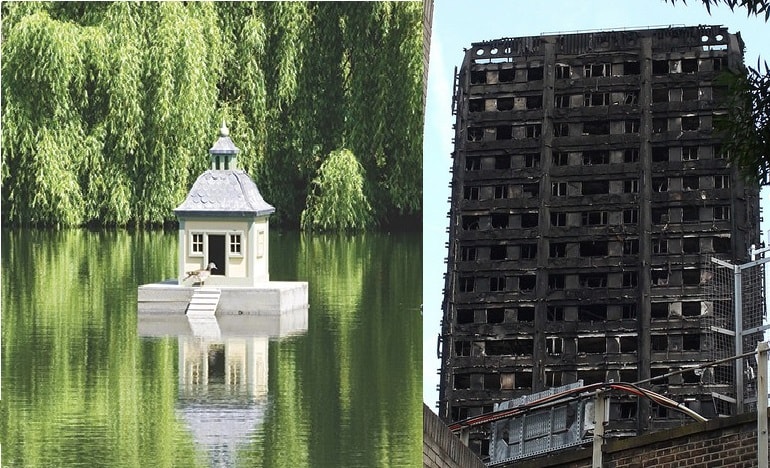 Since the Grenfell fire tragedy, the Conservatives’ record on housing has come under intense scrutiny. The public tower block wasn’t fitted with sprinklers, lacked sufficient fire alarms, and only had one exit. While Prime Minister last year, David Cameron was one of 72 landlord MPs to vote against ensuring ordinary homes were “fit for human habitation”.

But there are a number of housing luxuries that Conservative politicians have found the money for.

Former Conservative MP Peter Viggers tried to charge the taxpayer £1,600 for a floating duck house. The MP for Gosport sat in the Commons for 26 years before revelations about his expenses forced him to stand down in 2010.

Over three of those years, Viggers claimed £30,000 from the taxpayer for “gardening”. Meanwhile, many people in social housing have had to endure worsening conditions. Campaigners for safety in the Grenfell Tower in Grenfell Action Group wrote in November 2016:

It is a truly terrifying thought but the Grenfell Action Group firmly believe that only a catastrophic event will… bring an end to the dangerous living conditions and neglect of health and safety legislation that [the landlords] inflict upon their tenants and leaseholders.

The research, carried out for Shelter, also shows young people and those living in London are more likely to live in a substandard home.

The taxpayer will fund £369m worth of “urgent” repairs to Buckingham Palace, spanning over ten years. In the wake of the Grenfell fire, many people have called out the Conservative government’s warped priorities:

Cost of Buckingham Palace refurbishment: £369m
Fund allocated to the hundreds of survivors of #GrenfellTower: £5m#JusticeForGrenfell

One has £370million refit & the other couldn't get alarms or sprinklers

The Queen already receives a massive 15% of the revenue from estate land, while ordinary families share the rest. To pay for the refurbishment, the Queen will receive 25% of that revenue for ten years.

Former Prime Minister David Cameron tried to charge the taxpayer £680 for repairs to his home, including removing wisteria from his chimney. Other house work the multi-millionaire attempted to charge the public for included replacing outside lights and fixing his conservatory roof.

The Conservatives have continuously presided over socialism for the rich, leaving ordinary people in precarity. While handing the royals an extra £369m to refurbish their palace, the government doesn’t even ensure sprinkler systems are installed in public housing. An absolute disgrace.