The far-right response to the Finsbury Park terror attack just got smashed. By Piers Morgan. [VIDEO] - The Canary 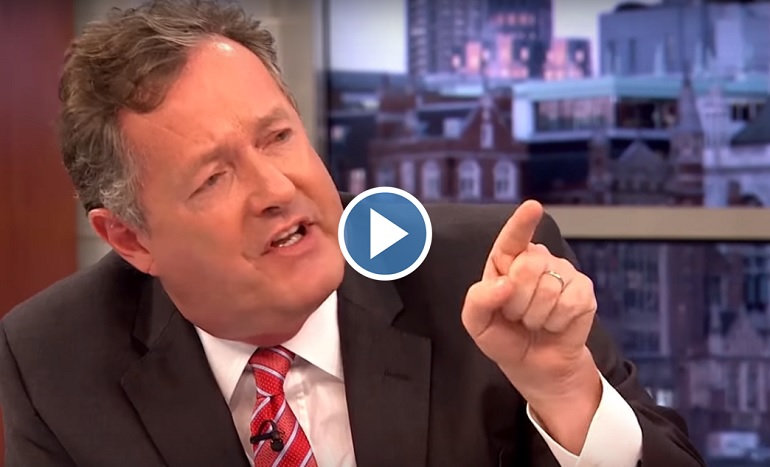 On 20 June, former EDL leader Tommy Robinson appeared on Good Morning Britain. The show had invited him on to challenge controversial comments he’d made after the 18 June Finsbury Park terror attack. And of all people, it was Piers Morgan who smashed the shameful response of people like Robinson.

Morgan challenged Robinson’s response to the terror attack by saying:

Within one hour, your thought process was to go on the attack to talk about another mosque, not the one that had been attacked… What you were doing was fermenting hatred, almost suggesting that somehow this attack – a ‘revenge attack’ as you put it – was somehow deserving because of the historical behaviour of certain people at a different mosque.

In short, the Good Morning Britain presenter was pointing out that the first reaction of some figures on the far right to the attack was not sympathy or outrage, but an attempt to deflect blame and call it ‘revenge’ rather than terrorism. When it emerged that the van reportedly used in the attack had been hired in south Wales, for example, the far-right National Front’s Welsh regional organiser Adam Lloyd also claimed “this is not a terrorist attack but a revenge attack”.

Morgan clearly thought this initial response was telling. And when Robinson began waving the Quran around and attacking it, the presenter said:

You are an Islamophobe who hates Islam. You basically think all Muslims are to blame… What you are doing now is deliberately inflammatory. It is deliberately poisonous. And you are having the complete opposite effect to the one that you say you have. You are stirring up hatred.

Robinson responded to the allegation that he was an Islamophobe by insisting:

There’s no such word as Islamophobia.

In his interview, Robinson quoted a criticism of the Quran from 19th century British politician William Gladstone. A comment made in the context of a religiously conservative Victorian England. And as anti-hate group Tell MAMA says, “Gladstone’s true views about Islam are often misconstrued or impossible to verify. Any malice towards Islam is a product of fraught 19th Century relations between Britain and the Ottoman Empire…”.

Robinson also tried to justify himself by saying there were “100 verses in this book that incite violence and murder against us”. But Muslims have long pointed out that Islamophobic groups simply take verses from the Quran out of context in order to misrepresent their teachings.

In reality, many religious texts could be misinterpreted to encourage violence. And Penn State University’s Prof Philip Jenkins is just one person to relay that message. He says:

the Islamic scriptures in the Quran were actually far less bloody and less violent than those in the Bible… By the standards of the time, which is the 7th century A.D., the laws of war that are laid down by the Quran are actually reasonably humane… Then we turn to the Bible, and we actually find something that is for many people a real surprise. There is a specific kind of warfare laid down in the Bible which we can only call genocide.

He describes how past political leaders used these messages to justify their actions from the Crusades in the Middle Ages to other ‘religious’ wars between the 16th and 19th centuries. We could also look to the notorious Spanish Inquisition for evidence of religiously justified wrongdoing.

The University of South Carolina’s Waleed El-Ansary, meanwhile, insists that the Quran clearly condemns the killing of civilians. But he argues that an environment of Western military interventions in the Muslim world and the rise of Wahhabism (pushed by Saudi Arabia) have increasingly seen extremists manipulate Islamic texts for political purposes. He says:

Basically what they do is they take verses out of context and then use that to justify these egregious actions.

Any misinterpretation is dangerous

While the Western world is now much less religious or conservative than it was in the past – especially compared with other parts of the world, there are still messages of violence in Christian and Jewish texts that extremists could manipulate to justify their actions. As El-Ansary says:

The scriptures are still there, dormant, but not dead… and they can be resurrected at any time. Witness the white supremacists who cite the murderous Phineas when calling for racial purity, or an anti-abortion activist when shooting a doctor who performs abortions.

Essentially, all religious texts were born in very specific historical contexts, and all have the potential to be manipulated or misquoted to justify the messed-up agenda of violent extremists. And addressing such manipulation is key to defeating corrupt ideologies that seek to justify the murder of innocent civilians.

The divisive and ill-informed fearmongering of figures like Tommy Robinson, however, helps no one. And for once, Piers Morgan did an excellent job by challenging Robinson’s inflammatory and poisonous message live on Good Morning Britain.