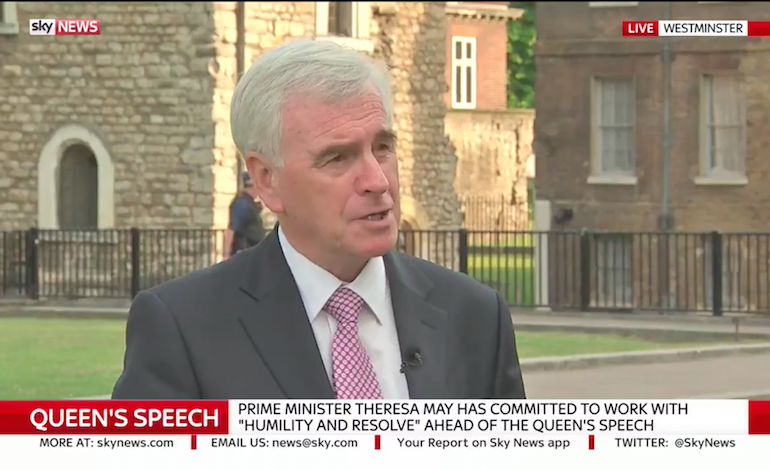 Labour’s Shadow Chancellor John McDonnell has told the country the last thing Theresa May wants to hear. He has predicted it is only a matter of time before May’s minority Tory government collapses, and said Labour is ready and waiting to form a government.

He told Sky News on 21 June that the Prime Minister’s attempts to cobble together an arrangement with the homophobic, anti-abortion, climate-change deniers of the Democratic Unionist Party (DUP) had so far failed. He added:

I can’t see this government surviving…

May, McDonnell suggested, was struggling to do a deal because of the increasingly anti-austerity mood in the country:

The Conservatives are going against the grain of what the people out there want, as demonstrated in this election debate that we’ve had.

Even the DUP does not support continuing public sector cuts and benefit cuts that hit the poorest, such as the bedroom tax.

This makes May’s desperate bid to stay in Number 10 look increasingly difficult. McDonnell said her administration would eventually break down:

It’s got to be inherently unstable because I can’t see the DUP supporting many of the measures that the government wants to bring forward, particular on austerity.

Labour, McDonnell added, would seek to amend the government’s programme in parliament to end austerity:

Most of our amendments will be about ending austerity. We’ve seen things today, for example, headteachers writing to individual MPs and to parents saying we can’t go on with these school budget cuts. The same with the policing cuts, the fire service.

Labour has prepared its own Queen’s speech. McDonnell said the party was ready and waiting to form a minority government:

We could go into government tomorrow. We’d form a minority government, we’d set out our programme. I think, most of our programme, we could secure a majority within parliament as well.

He pledged not to do any backroom deals with other parties. But he insisted that Labour’s plan to roll back years of austerity enjoyed support in parliament:

We wouldn’t do a deal… We’d invite MPs to support it. And we think… we could get a majority.

He said the nation was in a “bizarre situation”, because it looked as if the government had junked the manifesto it campaigned on:

Normally, the sort of constitutional practice of this country is that a party puts forward its manifesto, gets elected on that manifesto, and then implements it.

The Queen’s speech did not include many of May’s key manifesto pledges. There was no bill to bring in new selective grammar schools or scrap universal free school meals for primary schools. Nor were there any proposals to means test winter fuel payments or introduce a so-called dementia tax.

But whatever happens between May and the DUP, McDonnell said Labour would continue to fight austerity.

The budget is still place, so all those measures that were cutting family credits and others are all going to roll forward as well. So we’ll be focusing on ending austerity.

May’s government looks weak and wobbly. The DUP wants concessions she cannot give. Her friends in the media have turned on her and street protests are growing. Her erstwhile colleagues are already plotting their leadership bids. It may not be too long before McDonnell and Corbyn get a chance to radically change the course of this country’s history.

– Sign the petition of no confidence in a Conservative/DUP coalition. Make your thoughts on the deal known.