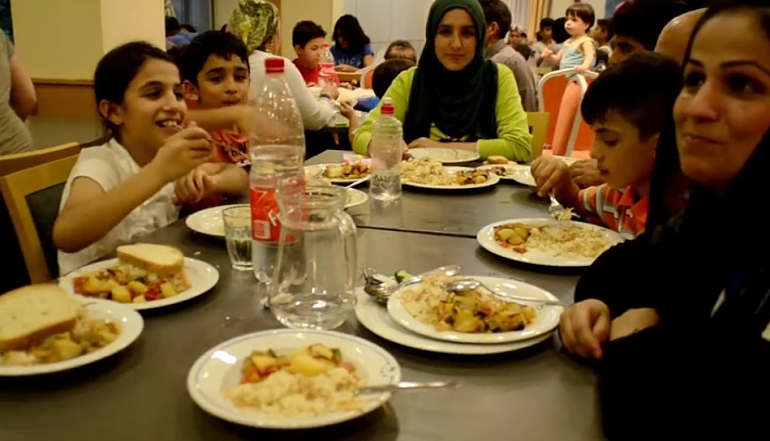 In Britain, legal action is underway to try and force the Tory government to accept more unaccompanied child refugees. But elsewhere in Europe, activists haven’t waited for government action. They’ve taken matters into their own hands. And the results are truly inspiring.

The Conservative government is currently facing a court challenge regarding its moves to restrict the number of unaccompanied child refugees allowed into Britain. This has come about after the government was forced to admit it had ‘missed’ 130 local authority places for children due to an ‘administrative error’.

Refugee campaigners had originally hoped that up to 3,000 children would be allowed into Britain. But to date, only 200 unaccompanied refugee children have been allowed into the country.

The court decision is expected any day.

When the state fails to do the right thing, however, there are always people prepared to take direct action.

Around 65,000 refugees are still stuck in Greece, with 16,000 on the Greek islands. There are also thousands of refugees living on the streets of Athens, including families with small children. In response, the Greek state simply set up more than 40 detention centers and camps.

But there is another way. Anarchist activists in Greece, for example, have a long tradition of squatting empty buildings to house the refugees. Empty buildings and even empty hotels have been squatted and turned over to refugee collectives, with activists working with the self-managed collectives to provide food, clothing, medical care, and schooling.

One such squatted refugee centre is Hotel Plaza, in central Athens. As well as a playground for refugee children, there are 126 rooms and a dining room, kitchen and bar. There’s also a storage room for food, a healthcare centre, a roof garden, a classroom, a library and a blog.

Another initiative is EL CHEf, a food collective set up in 2008 at the height of the economic collapse in Greece. It still provides food not just for homeless people, but for refugees too. Another nearby food kitchen is Nosotros, which invites refugees to join them for cooking and meals. They are both organised by local grassroots activists.

Meanwhile, the Greek authorities are planning to evict the refugees and activists from Hotel Plaza, as well as from two other squatted centres – Papoutsadiko and Zoodoxou Pigis. Activists are now calling for widespread support from sympathisers.

The squatted refugee centres are an example for us all. They are essentially run as collectives, with decisions made by everyone – locals and refugees – on an equal basis. Likewise, all activities – cooking, cleaning, social events etc. – involve every person at the centre. In short, these collectives are mini-societies, practising democracy on a day-to-day basis. And the people organising them don’t look to the Greek government for help; they instead bypass the state and empower people to run their own lives.

Their example could hardly be further removed from the example set by governments in countries like Britain and Greece.