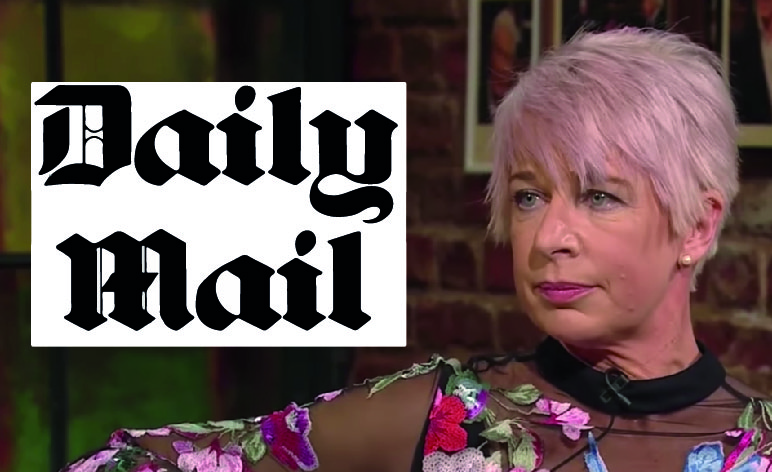 In an attempt to defend its good honour, The Daily Mail has launched a blistering attack against The Guardian. And among the bile-laced ‘we’re not hateful: you’re hateful!’ commentary, one piece of information stood out. Said info being that The Mail Online is not in fact an online version of The Mail. An assertion it seems to have made in order to distance itself from the controversial, hard-right columnist Katie Hopkins. 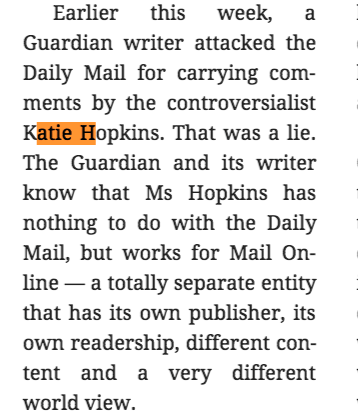 It came as a shock to some that the two entities are in fact separate. But that is apparently the case. As long as you can ignore the branding of their Twitter account:

Paul Dacre seems to be in receipt of a large payment directly linked to his involvement with Mail Online. At odds with today's op-ed? pic.twitter.com/b3tMYHiVSP

The Mail font used on both:

The daily shared content that’s written by the same writers. With the following piece appearing on The Mail Online and today’s Daily Mail – the very same issue which asserts that the two entities are “totally separate”:

And of course this clarification which can be found at the bottom of every Mail Online page:

What’s astonishing is that The Daily Mail has just publicly snubbed Katie Hopkins. It has pointedly not defended any criticism of its fellow media group employee and has instead held its hands up and said “she’s nothing to do with us”.

But how has Hopkins become so toxic that The Daily Mail needs to clarify that she does not write for it?

Even if Hopkins knows nothing of Nazism – which I doubt – her "final solution" can only mean ethnic cleansing pic.twitter.com/U7SDYh4e8q

She later deleted this tweet and tweeted a version calling for a “true solution”. Hopkins stood by the original tweet, though. She also claimed to have changed it because of a typo (having written ‘Machester’ instead of ‘Manchester’): 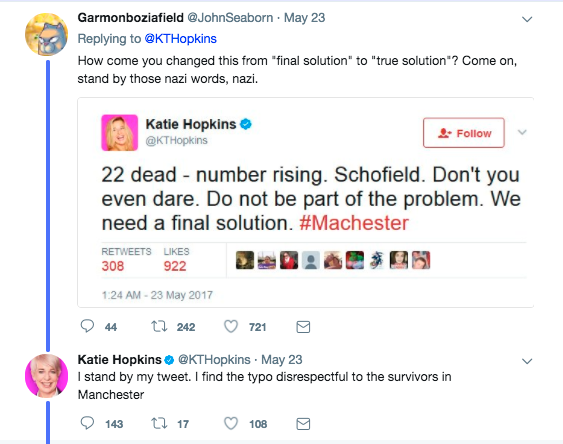 The Guardian article linking Hopkins to The Daily Mail (not to be confused with The Mail Online) is thought to be written by Nesrine Malik:

I also said writes for Mail Online and is employed by the Daily Mail but somehow that still is a DELIBERATE LIE.

Commentators have branded the likes of Hopkins and Tommy Robinson as “hate preachers” following the Finsbury Park attack. Writing on this subject, Malik said:

After the Manchester Arena attack, Katie Hopkins called for a ‘final solution’. She deleted her tweet and apologised for it, but it did not, to be frank, seem out of character. The fact that she is still employed by the Mail Online, occupied until recently a prime time slot on LBC and is defended vigorously on the grounds of freedom of speech is an illustration of the extent to which we apply double standards. The uncomfortable truth is that Hopkins and her ilk are given permission to spout invective because they are seen by some as ‘one of our own’ – and therefore in a different category, tolerated and excused.

Beginning of the end?

Hopkins has already lost one job. She’s seen as a prominent purveyor of the sort of anti-Islamic rhetoric that even the government is now calling ‘extremism’. She was accused of insulting Britain by telling Fox News that Londoners were “cowed and afraid” by terror. Fox News later itself branded Hopkins’ comments “reprehensible” after she called for internment camps. And The Daily Mail has just publicly snubbed her.

As Nesrine Malik said in response:

It’s looking increasingly like the opportunistic Hopkins is no longer tenable as a mainstream media personality.

– And read more articles about The Daily Mail here.