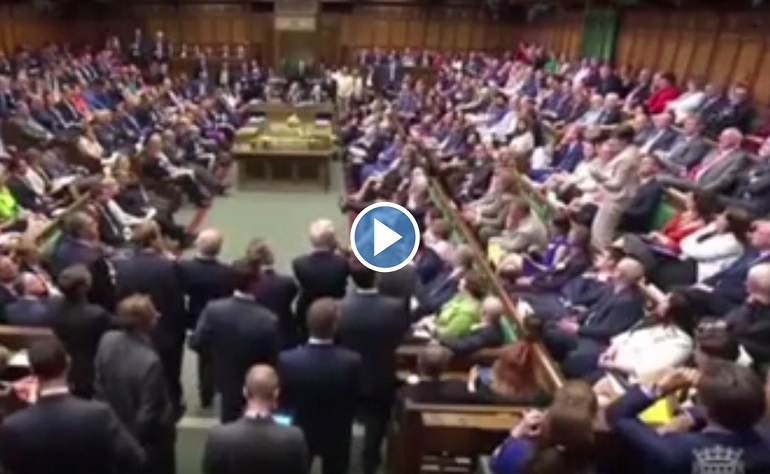 There was one moment on 21 June when parliament exposed a massive hole in the Tories’ Queen’s speech. And although it was only lightly covered in the mainstream media, it will be of great importance for Britain as it leaves the European Union.

Green Party MP and co-leader Caroline Lucas pointed out that talk of dealing with climate change was almost completely missing from the Queen’s speech. She said:

The gracious speech contained eight Brexit bills, but not one single one of those bills covered the environment. Is [Theresa May’s] failure to propose a Brexit bill on the greatest challenge that we face because she simply doesn’t care about the environment and climate change, or because she’s been influenced by the DUP dinosaurs…?

The Queen’s speech only mentioned that the government would “continue to support international action against climate change”. But that was it. Much like the DUP manifesto, it was empty on content. This document, for example, includes not even a mention of the environment or climate change. And one DUP MP in particular is an outspoken climate change sceptic.

The DUP on climate change

Denial of climate change is not officially a DUP policy. But Northern Ireland is currently the only part of the UK which doesn’t have its own legally binding targets aimed at cutting carbon emissions. According to the Director of Friends of the Earth Northern Ireland, James Orr:

There have been a series of attempts to get climate legislation here over the last ten years. The DUP are the most reluctant party to embrace greenhouse gas reduction targets… They are very much a deregulation party in terms of environmental protection – it’s in their DNA…

But that’s not the worst part. Northern Ireland’s former Minister of the Environment, DUP MP Sammy Wilson, has previously stated “I do not believe in man-made climate change”, and that it’s a myth “based on dodgy science”. Wilson has consistently voted against measures to prevent climate change. He claimed Donald Trump’s recent decision to withdraw from the Paris Climate Agreement was “very wise”. And he once said:

I have been branded… as one of the ten most dangerous climate change deniers in the world. I’m glad to have that title.

Meanwhile, there is a strong consensus among scientists that humans are causing or having an impact on climate change. A 2016 scientific paper that analysed six independent studies, for example, reached the conclusion that:

The Tories on climate change

While Britain is currently signed up to the Paris Agreement, the Conservatives’ commitment to protecting the environment also seems doubtful. One of Theresa May’s first acts as Prime Minister, for example, was to disband the Department for Energy and Climate Change. And she gave climate change just a “cursory” mention in her speech at the last Tory party conference, while mentioning “business” 14 times and “economy” 26 times.

May’s party, meanwhile, has propped up the ailing fossil fuel sector with subsidies – a move the competition watchdog has warned against. This is despite the efficiency and popularity of greener alternatives. It also appears committed to scrapping subsidies for renewable energy while granting fracking licences around the country – and even in national parks.

But there may be another reason that the Queen’s speech was so light on detail about dealing with climate change. As Boris Johnson admitted in a disastrous interview on 21 June:

That, he suggested, could explain why the Tories have apparently dropped so many parts of their 2017 manifesto.

The worst interview from an aspiring Prime Minister you will ever hear. Boris Johnson is finished. Listen to this… pic.twitter.com/P82WOsqdNR

Labour leader Jeremy Corbyn promised numerous actions to deal with climate change during the 2017 election campaign. And on 21 June, he referred to the Tory/DUP deal by saying:

I understand the latest coalition may already be in some chaos. And nothing could emphasise that chaos more than the Queen’s speech we’ve just heard. A threadbare legislative programme from a government that’s lost its majority and apparently run out of ideas altogether.

And one of the major absentees from this “threadbare” Queen’s speech was any meaningful reference to protecting the environment. An issue not only of great importance for Britain, but for the world as a whole.

Another big reason not to remain silent in the coming days, weeks and months.

– Make your thoughts on the Tory/DUP deal known. Contact your MP and be vocal on social media.