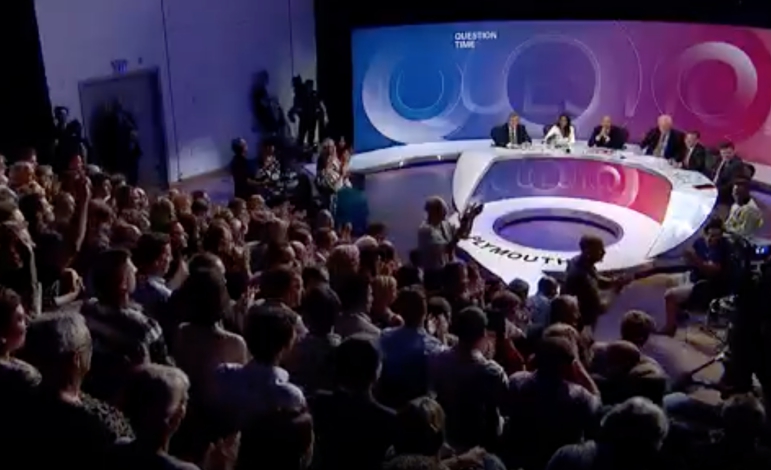 On 22 June, the BBC Question Time audience took on The Daily Mail – and won. Mail columnist Peter Oborne appeared on the programme and attempted to justify the reputation of the paper. But the audience responded with laughs and jeers. And it shows just how much the tide is turning against the paper.

Oborne described The Daily Mail as:

an extremely accurate and fair paper.

But he was interrupted by the audience bursting into laughter and even cries of “Oh no, it’s not”. Undeterred, Oborne continued:

It’s read by an awful lot of people, honourable decent people, including, I’d imagine, a lot of you in this audience. It’s a great newspaper. It doesn’t tell lies.

The audience responded with more gasps and jeers:

Peter Oborne laughed at by #BBCqt audience when he says the Daily Mail is an honourable newspaper. pic.twitter.com/JGhLMDwI9q

But far from being a “fair paper”, The Mail is better known for its right-wing xenophobia. And this has been the case since the 1930s, when it railed against Jewish people coming to the UK and praised the Blackshirts.

And this attitude continues into the present. From racist cartoons to headline after headline bashing refugees and immigrants, the paper has been part of creating a climate of hostility. In fact, the European Commission against Racism and Intolerance (ECRI) accused the paper of using “offensive, discriminatory and provocative terminology”.

The paper is also known for publishing scare stories about immigrants. For example, one headline screamed: PATIENTS AT RISK FROM EU DOCTORS. But as one doctor responded:

You seek to foster division, engender distrust and cultivate fear of my friends and colleagues based on their nationality.
You do this whilst wilfully blinding others to the vital, invaluable service these people provide every damn day up and down the country and shielding the wealth of evidence regarding it from the public.

I won’t allow that to happen.

The tide is turning

But the tide is turning against the tabloid press. And it’s not just against The Mail. During a film premiere in Hackney, London, Rupert Murdoch was heckled by an audience member who told the media mogul:

Campaign groups such as Stop Funding Hate are hitting the advertising revenue of these papers, with major brands such as Lego pulling out from its Mail promotions. Meanwhile, the election showed that people are seeing there is an alternative to the hate-filled drivel of The Mail and The Sun.

People are saying loudly that they do not trust or want a media that is owned by a handful of billionaires.

This Question Time audience took on The Daily Mail and won. And it shows just how much the tabloid media has lost its grip on the general public.

– And read more articles about The Daily Mail here.