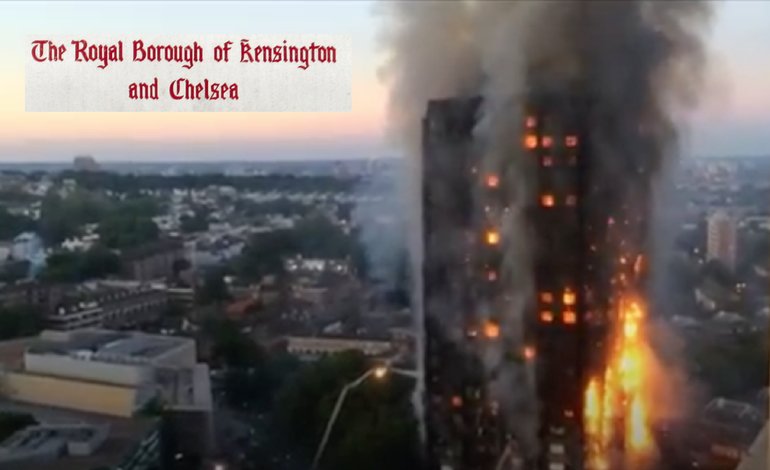 A little after midnight on 14 June, a fire broke out in a single apartment of the 24-storey Grenfell Tower. Within minutes, the fire had engulfed much of the building. The most likely cause for the accelerated fire was combustible cladding, wrapped around the building to make it prettier for neighbouring millionaires of Kensington and Chelsea. Dozens of people lost their lives, and those who survived lost everything but.

Yet this horrific event seems to have had zero impact on the attitude of Grenfell’s rich neighbours, if recent reactions are anything to go by.

Once the emergency services had done everything they could to save lives at Grenfell Tower, the cleanup was left to locals. There was virtually no state or local government support in the critical hours and days after the fire. It was a community effort that clothed and fed residents in the aftermath. While those with the least pitched in to help, those with the most (mostly) stayed away.

When the state finally showed up, people were issued with £10 a day to live on. There have also been claims that residents could be made ‘intentionally homeless’ if they refuse what’s offered too, although the Royal Borough of Kensington and Chelsea denies this.

People have been sleeping in cars and in parks because they don’t know where to go and they aren’t being looked after.

Secondly, they need to be re-housed permanently and thirdly they need a long-term care package – people who’ll always be there for them.

But on Wednesday 21 June, Theresa May issued a mea culpa in parliament. And it was announced that some residents were to be housed in 68 nearby ‘luxury apartments’.

This later turned out to be an exaggeration. The residents would be rehoused in social housing adjacent to luxury apartments. The homes are not yet completed, and unlikely to be viable until late July. As The London Evening Standard reports:

The Standard revealed on Wednesday that 68 ‘social housing’ flats in the £2 billion Kensington Row scheme have been acquired to permanently house families from the nearby tower.

But there was a catch. Like many such developments built recently, the residents are segregated by class. Many new developments now even have ‘poor doors’, which are separate entrances for poorer residents. The divide continues inside the developments, with segregated facilities. Gyms, pools, entertainment centres and gardens are made available to wealthy tenants only, with poor residents excluded. The same will be true in this case. The Standard reports that “a gym, swimming pool and 24-hour concierge service… will be off limits to Grenfell families”.

And yet the occupants of the luxury tower are still complaining about the arrival of the Grenfell survivors. Having paid between £1.5m and £8.5m for their homes, they are now concerned about property prices.

One woman, who bought her flat two years ago, told The Guardian:

We paid a lot of money to live here, and we worked hard for it.

Now these people are going to come along, and they won’t even be paying the service charge.

I’m very sad that people have lost their homes, but there are a lot of people here who have bought flats and will now see the values drop.

It will degrade things. And it opens up a can of worms in the housing market.

There were furious responses on social media: 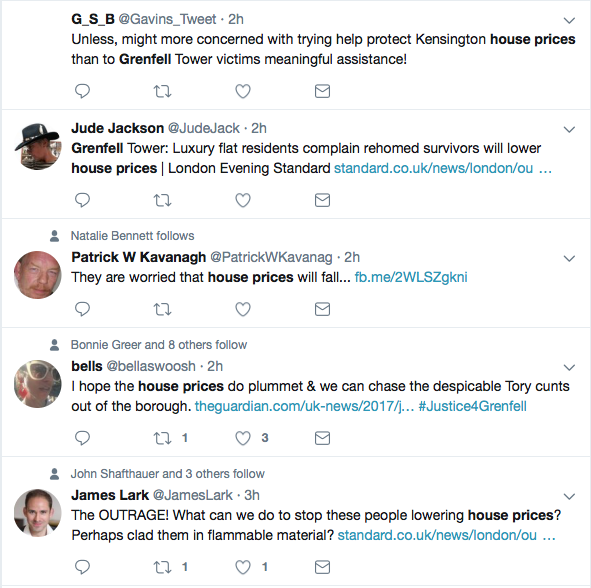 They have learned nothing

The residents of Grenfell Tower lost their lives because they were poor. They were in that tower block because of a failure to provide decent social housing. Their poverty was offensive enough to local millionaires to hide behind combustible cladding, but not to actually resolve. And the value placed on lives lost and devastated by the inferno was so little that it was left to equally impoverished local volunteers to clean up the mess.

Instead of learning that this dehumanising reaction to gross wealth inequality has to end, some affluent locals are carrying on regardless.

Who could see a mother throw her baby from a high-rise tower to ensure it escaped her fiery fate, and then complain about rehousing the baby?

These people. People so elevated by wealth that the concerns of those beneath them are as ants to eagles. It is a breathtaking indifference to human life that cannot be tolerated in a civilised society. It is a mindset as toxic as racism, antisemitism, homophobia, sexism, or any other prejudice that robs the object of their humanity. We must make this behaviour unacceptable in society and unelectable in politics. Because only a radical shift in our priorities is going to change this. And that work cannot start soon enough.