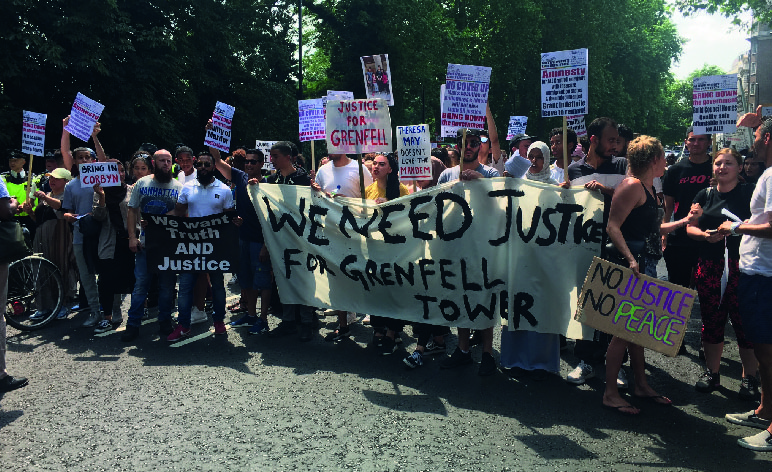 The right-wing media lost its shit on 21 June. Writing about a ‘Day of Rage’ protest that coincided with the Queen’s speech, The Express shouted: STOP IT! Fury erupts as Day of Rage set to put ‘exhausted’ services under MORE pressure. The Mail, meanwhile, put the story on its front page. But after all the right-wing hysteria, only a few hundred protesters turned up to the event – a fact the media could and should have been well aware of in advance.

Several commentators and news outlets have been outraged about a planned ‘Day of Rage’ protest.

It was a small march of a few hundred people that later joined up with a protest at Parliament Square. But you’d be forgiven for thinking there were many tens of thousands of  people if you followed right-wing commentators:

It defies belief that anyone thinks what our heroic, overstretched & exhausted emergency services really need today is a #DayOfRage protest.

Or if you read the right-wing press: 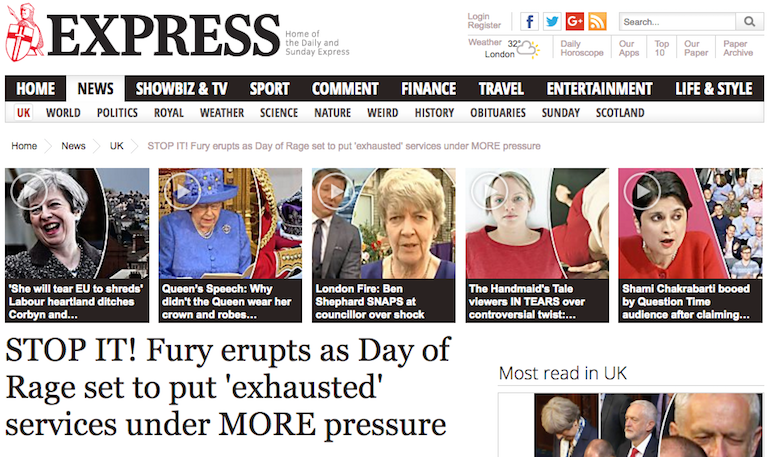 This is the Daily Mail, using the victims of #GrenfellTower as pawns to shut down criticism of a woeful PM and horrible govt pic.twitter.com/ue9HHaCQbH

The Facebook page for the march showed that 419 people would be attending, and 1,000 were interested. This is a publicly viewable event that was visible to anyone who felt like investigating: 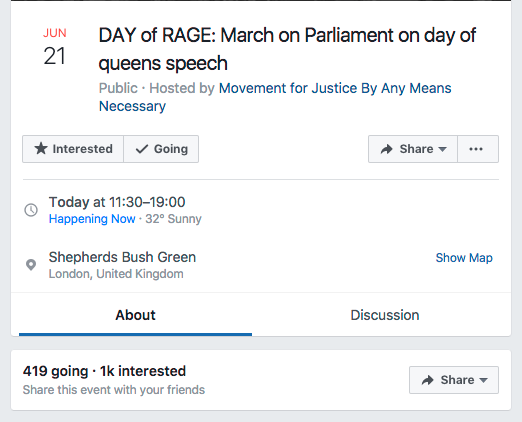 The BBC said of the march:

Despite all the chatter online however, the actual event was quite small, with handfuls of protesters gathering in west London and a few hundred saying they would attend on the official ‘Day of Rage’ Facebook page. Protesters were expected to make their way to central London where further demonstrations were planned for Wednesday afternoon.

But the most influential people using the hashtag weren’t left-wing protesters opposed to austerity and angry about the fire – in fact they were conservatives and others opposed to the march.

The Telegraph has reported that Paul Nelson, a Grenfell relief volunteer and local, approached the marchers in an ‘angry confrontation’. He said:

I’m very upset because I think it’s… politicising the anger. Now is not the time.

Others have put forward counter arguments about ‘politicisation’ over the past few days.

Rapper Lowkey, who witnessed the fire, has said that:

Labour MP David Lammy, who lost a friend in the Grenfell fire, said:

The UK has also seen major cover-ups, including the Hillsborough disaster. As such, many would argue that quietly sitting back risks those at fault being gifted time to cover their tracks. David Lammy said on the issue:

When the truth comes out about this tragedy, we may find that there is blood on the hands of a number of organisations. At this stage, it is my grave concern that the families of Grenfell Tower will not get justice if documents are being quietly destroyed and shredded and emails are being deleted.

It’s also irrefutable, as the Prime Minister herself said, that the response to the Grenfell fire was “not good enough”. Although still leaving a lot to be desired, that response has improved. It has now, in fact, seen the government acquire social housing in a luxury development to rehouse displaced Grenfell residents.

It’s notable that much of this government action seems to be a direct response to political pressure from residents, activists, journalists, and politicians.

The media has ignored several much larger protests. Despite some of them attracting tens of thousands of people, The New Statesman believes that:

There’s no organised ‘media blackout’ on reporting protest marches. More often than not, they just aren’t that much of a story.

So some may find it strange that a march of a few hundred people could capture such attention. Yet they won’t be surprised to hear that the same criticisms being made of the march are those that the right always wheel out. That protest is wrong. That it undermines the cause. And that only ‘loony lefties’ care about social issues anyway.

It’s not surprising, because these arguments are designed to distract from the actual issues. The issues in this instance being the injustice of people in the 21st century living in fear, poverty, and danger.

So yes, it is seeing the issue as political. But you shouldn’t be ashamed of having a political agenda if your agenda is to end people living in such lethal conditions.