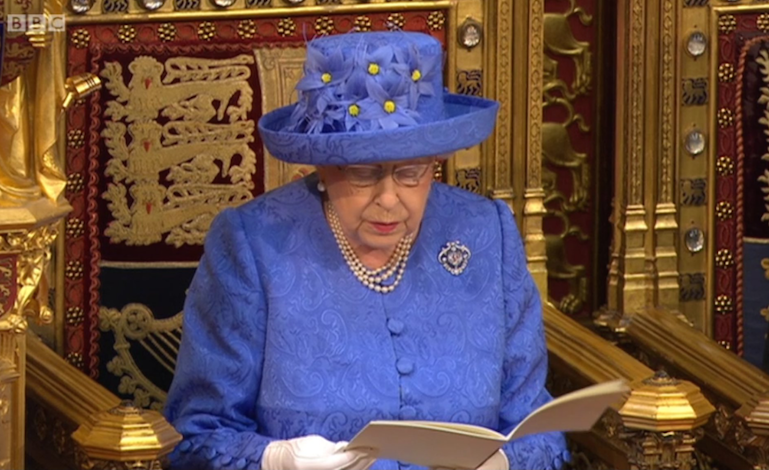 People on Twitter have spotted something hilarious about the hat the Queen wore to deliver her speech on 21 June.

Not to be facetious but the Queen's hat looks like the European Union flag pic.twitter.com/1nDJ3sWDTd

After losing her majority and facing discontent in her own ranks, Theresa May has been forced to abandon or postpone most of her manifesto pledges. Instead, the Queen’s speech largely focused on one thing: Brexit. Of the 27 bills announced, eight relate entirely to Brexit.

And the Queen chose to wear a hat that bore an uncanny resemblance to the European flag as she read out the words:

A bill will be introduced to repeal the European Communities Act and provide certainty for individuals and businesses. This will be complemented by legislation to ensure that the United Kingdom makes a success of Brexit, establishing new national policies on immigration, international sanctions, nuclear safeguards, agriculture, and fisheries.

Was the Queen deliberately trolling the Prime Minister? Who knows.

But the Queen had already delivered an extraordinary snub to the Prime Minister over the Queen’s speech, which was delayed following a series of shambolic announcements and retractions about the Conservatives’ botched attempts to make a deal with the DUP. Rather than wearing the traditional robes, the Queen chose to wear ‘day dress’ for the Queen’s speech. And rather than arrive in a carriage, she chose to arrive in a car. It was the first super-casual Queen’s speech since 1974 – and it did not bode well for the last Prime Minister she snubbed in such a way.

This article was updated at 12:30pm on 3 August 2017 to remove a tweet whose sender wished to remain anonymous.