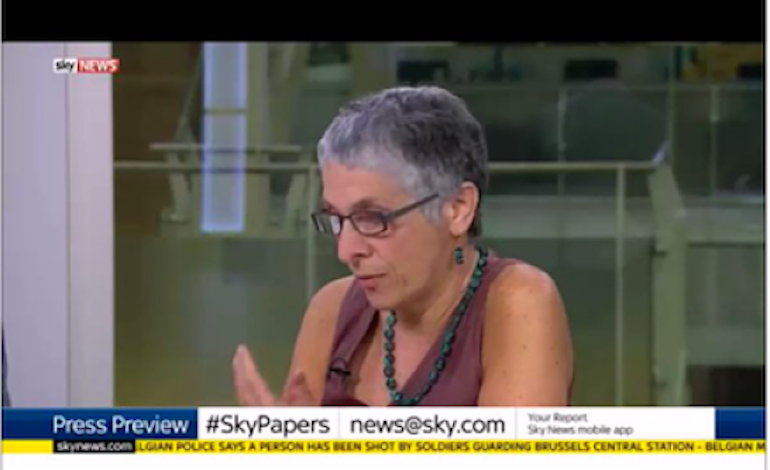 People have lashed out at Times columnist Melanie Phillips after she appeared on Sky News to deliver an inflammatory, Islamophobic, and incorrect statement about 90% of the world’s Muslims. And some think the racist and false slur is a sackable offence.

Reviewing the papers on Sky News on 20 June, Phillips comes onto the subject of “religious Islamic fanaticism” and broad-brushes 1.6 billion people:

The problem being faced by not just Britain, not just the West, but the whole of the free world, and the not-Muslim-enough world, is the problem of religious Islamic fanaticism

She then goes on to misquote Egyptian military dictator President Sisi, saying he told imams that:

We cannot anymore have a situation where 1.6 billion Muslims are trying to murder the rest of the world.

The problem being that Sisi actually said:

Does this mean that 1.6 billion people (Muslims) should want to kill the rest of the world’s inhabitants – that is 7 billion – so that they themselves may live? Impossible!

Many have pointed out that to write off 90% of the world’s Muslim population to not only extreme ideological views but also murderous tendencies is “racist” and “bigoted”. Yet the mainstream media is again giving such attitudes a platform.

"1.6Bn Muslims are trying to murder the rest of the world" @TheTimes is this Islamophobic slur acceptable from one of your star writers? pic.twitter.com/MLBpZdm5KD

disgusting Melanie Phillips the bigot on @SkyNews equating 1.6bn muslims with a tiny minority of extremists.

Phillips also hit out at her co-guest who suggested there is a growing radical front from the white far right. The Finsbury Park attack saw an attacker use a hire van to run over Muslim worshippers outside a mosque. He killed one and injured several others. The police and government have described it as a terrorist attack. But Phillips had this to say:

Finsbury Park is being leapt upon by the people who want to pretend that the real problem facing the world is not Islamic religious fanaticism, has been leapt on for people to say, ‘you see, it’s nothing to do with Islam, it’s basically a problem of terrorism’. It’s not true. There is every difference in the world between an interpretation of the religion, which is inspiring millions of people to try and kill others…

While citing the most wild statistic, suggesting “millions” are inspired to kill, she downgraded the incident that took place on 18 June, despite the driver reportedly saying he wanted to “kill all Muslims”. And she declared with authority that you cannot equate the two.

But evidence does not back her up. For instance, an MI5 report in 2008 found that religious zealotry was not really a factor in radicalisation, with perpetrators being fairly ‘illiterate’ on religion. In fact, it concluded that a better established “religious identity” may actually prevent “violent radicalisation”.

And there is evidence of there being much in common between far-right extremism and so-called ‘Islamist’ extremism. Devon Arthurs is a case in point. Arthurs allegedly sieged a Florida smoke shop because he was “upset about America bombing Muslim countries”. But he was also a former neo-Nazi who converted to Islam at some point. And some experts believe it’s less ideology and more a “propensity for violence” that leads people to extremism.

But this doesn’t fit Phillips’ narrative. And neither does acknowledging the Muslim community’s rallying in times of grief to help wider communities they are part of.

For instance, many Muslims were praised for their response after the Grenfell Tower fire. Muslim organisations, meanwhile, started crowdfunding campaigns after the recent terror attacks in Manchester and London. And small displays of compassion have shown that they are not separated from their communities by faith.

Some may regard this to be the radical notion. But such views, like Phillips’, ignore the facts and base their arguments on bigotry alone. And there comes a point where news outlets, whether The Times or Sky News, must stop pandering to racist views such as hers and deny them a platform.