Theresa May's new chief-of-staff has huge questions to answer over Grenfell. But when asked, he ran away [VIDEO] - Canary 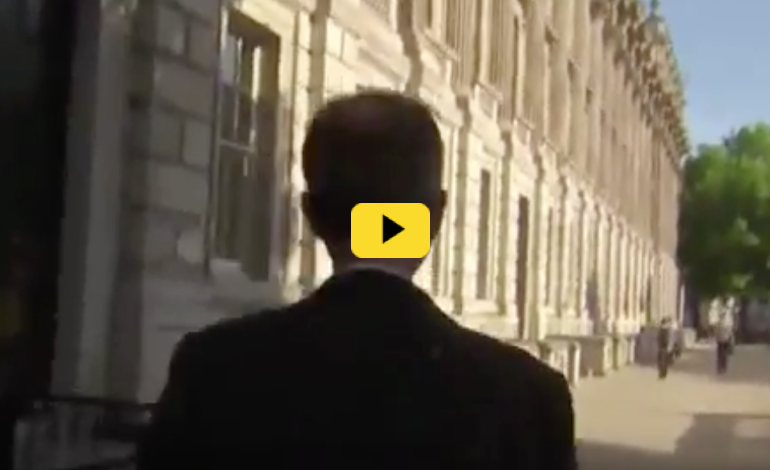 After losing his seat in the 8 June election, Gavin Barwell was appointed Theresa May’s chief-of-staff. The former Minister of State for Housing and Planning has serious questions to answer about his role in the government’s response to a previous tower block fire; and how this could have led to a very different outcome at Grenfell Tower. But when he was asked them, he ran away.

So far, 79 people have been confirmed dead after the inferno at Grenfell Tower, a high-rise social housing block in the heart of London’s richest borough, Kensington and Chelsea. A recent refurbishment saw the building covered in cladding to make it less of an eyesore for the neighbouring millionaires. Barwell had a key role in the government’s pitifully slow response to concerns about fire safety in social housing tower blocks.

As Barwell walked towards Downing Street, a team from Sky News approached him with a camera. They wanted to know why he had ‘sat on a report’ into tower block fire safety and whether Grenfell could have “been avoided”. He quickened his pace and refused to utter one word, even to express his sympathy for the victims and their loved ones.

This is Theresa May's Chief-of-Staff Gavin Barwell turning his back on the victims of Grenfell. #BarwellMustGo pic.twitter.com/TL7o8KkGoQ

Residents had persistently raised concerns that the 24-storey tower was a fire hazard. There was no functioning fire alarm, sprinkler system, and just one exit. Almost three years ago, the Grenfell Action Group wrote an open letter entitled Is Grenfell Tower a firetrap? It said:

A number of residents of Grenfell Tower are very concerned at the fact that the new improvement works to Grenfell Tower have turned our building into a fire trap.

There is only one entry and exit to the tower block itself and, in the event of a fire, the LFB could only gain access to the entrance to the building by climbing four flights of narrow stairs.

On top of this the fire escape exit on the walkway level has now been sealed.

Residents of Grenfell Tower do not have any confidence that our building has been satisfactorily assessed to cope with the new improvement works and we are seeking a meeting with the Chief Fire Officer from Kensington Fire Station so that these concerns can be addressed.

On 14 June, these fears became a reality. A fire apparently caused by a faulty fridge in one apartment became an inferno that overcame the entire building in around 15 minutes. Fire and smoke killed trapped residents in their dozens, while fire crews battled to save the few they could reach.

If the residents of Grenfell had been listened to in 2014, this fire need never have happened. And Barwell was in a position to have heard and acted upon those concerns. There is legitimate reason to ask questions as to why he did not.

Grenfell is not the first tower block fire in London. In 2009, six people were killed in the Lakanal House fire in Camberwell. At that time, it was the worst tower block fire in UK history. There followed accusations, denials, and a 10-week inquiry. And it was not until February of 2017 that Southwark Council was fined £570,000 for its part in the blaze. Botched renovation work and lax inspections had contributed to the fire and subsequent death toll. But residents had to wait nearly a decade for justice.

Worse, the government responded to the recommendations from the inquiry with breathtaking lethargy. When pressed on the matter by a Labour MP in the House of Commons last year, Barwell responded:

We have not set out any formal plans to review the building regulations as a whole, but we have publicly committed ourselves to reviewing [fire safety regulations] following the Lakanal House fire.

These recommendations were to stop another Lakanal House from happening. The Grenfell inferno should not have been possible.

Yet Barwell has steadfastly refused to answer the most basic questions. Which must lead us to ask another question of the Prime Minister’s chief-of-staff: is a man who refuses to be accountable for such a costly mistake fit for office at all?