In case you missed it, here's The Canary's Editor-in-Chief dropping a truth bomb on Question Time [VIDEO] - Canary 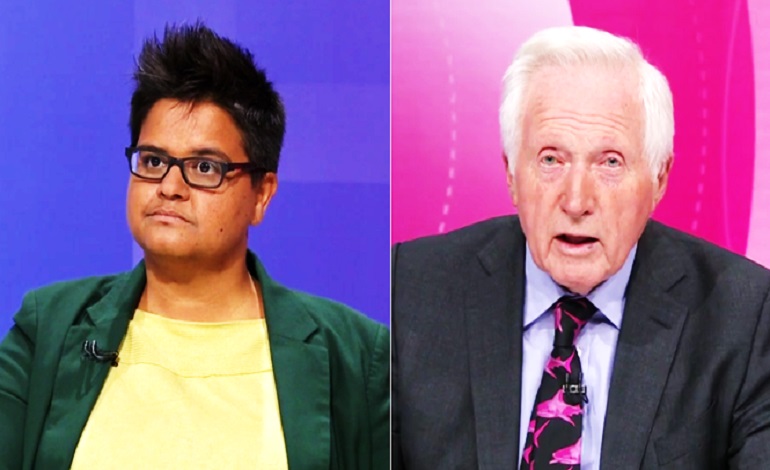 On Thursday 29 June, The Canary‘s Editor-in-Chief Kerry-Anne Mendoza made her first appearance on BBC Question Time. And when an audience member posed a question about the mainstream media, Mendoza had a few home truths to point out.

What’s the point of the mainstream media?

Do the mainstream media still serve any useful purpose?

This lack of media diversity is shown by the handful of people who own the press:

LBC host Nick Ferrari said Mendoza’s point was “rubbish”. But she went on to quote a study by the Social Mobility Commission which shows that 51% of journalists were educated at public schools. This compares to just 7% of the wider population.

So what you end up with is a mostly white, mostly male, mostly middle-class media based mostly in London… And the problem with that… is that narrow slice of humanity doesn’t know what it doesn’t know… It shouldn’t be a controversial point to say that the newsrooms of the British media should look and sound like the modern Britain in which they sit.

But Ferrari wasn’t having it. He said [from 52.48] that he had been “in and around” the mainstream media for “fifty years”; and that “never has the mainstream media been more important”. Also, he accused some new media of being akin to “the mad ramblings of the man on the top deck of the bus, speaking into his hand”. But Mendoza came back with an uncomfortable truth:

Swathes of the mainstream media have been happy to give a platform to Katie Hopkins, although she has now been sacked by LBC. She has called migrants cockroaches and claimed she didn’t care about “coffins and bodies floating in the water”. Just recently, a Muslim man was reportedly knocked unconscious and his home was spray-painted with words echoing those written by Hopkins after the recent Manchester attack.

A free and fearless media?

Studies show the mainstream media in the UK has a bias and freedom problem. For example, Reporters Without Borders has now ranked the UK 40th in its Press Freedom Index.

Nordic countries lead the index. Norway is first, followed by Sweden, Finland, and Denmark. And ahead of the UK are three former Soviet countries: Estonia, Latvia, and Lithuania. Also ranking better than the British press are Costa Rica, Jamaica, Namibia, Samoa, Trinidad and Tobago, and Uruguay.

Reporters Without Borders says of the UK ranking:

A heavy-handed approach towards the press – often in the name of national security – has resulted in the UK slipping down the [index]. Parliament adopted the most extreme surveillance legislation in UK history, the Investigatory Powers Act… posing a serious threat to investigative journalism. Even more alarming, the Law Commission’s proposal for a new ‘Espionage Act’ would make it easy to classify journalists as ‘spies’ and jail them for up to 14 years for simply obtaining leaked information.

A combination of corporate influence, government interference, and an ever-decreasing talent pool has caused the UK media’s grip on power to wane. And it is noticeable in the rise of both independent outlets and social media. But much still has to change before the country finally has a free and fearless media that doesn’t subvert democracy. So until such time, it’s important that the public know the truth about our mainstream media. And it’s crucial that The Canary, and others, hold it to account at every available opportunity.