It’s not just Grenfell. These tenants have been warning about fire safety for years [EXCLUSIVE] - Canary Workers’ Co-op 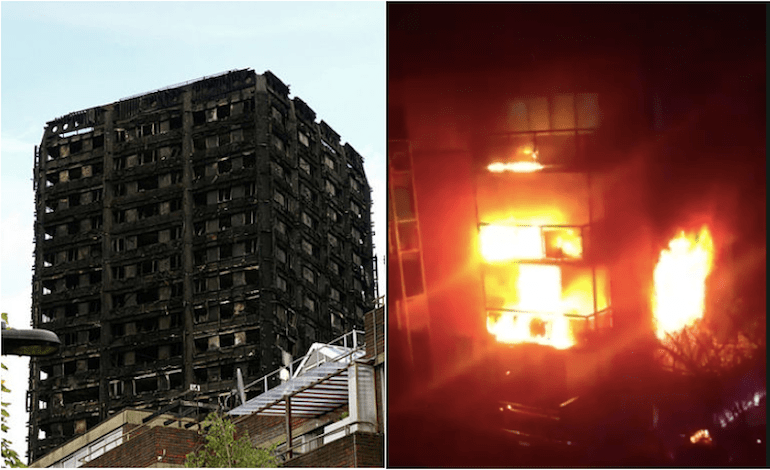 Residents of a block in London owned by Genesis Housing Association came forward straight after the revelations from the Grenfell Tower fire on 14 June. They say their repeated concerns over fire safety also fell on deaf ears. And they say they have been cautioning the housing association for over a decade, with no action.

We have switched off the fire alarm

Members of the Genesis Residents Action Group have told The Canary that, in 2005, Genesis Housing Association switched off their fire alarm. And it’s allegedly been off ever since. 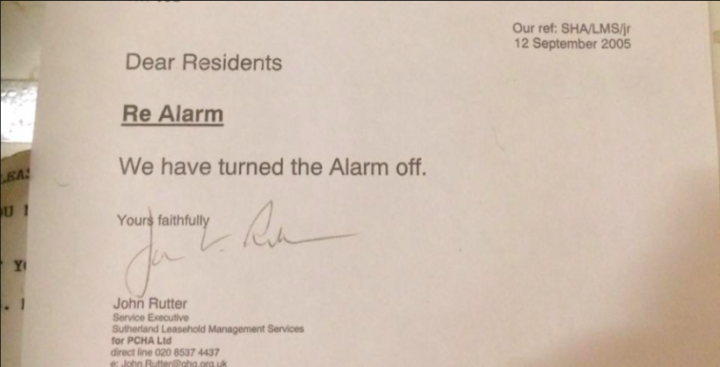 Rather than repairing or replacing faulty fire panels, Genesis instead chose to leave them – and save an estimated £20,000; because they said they had no legal obligation to do so anymore.

According to a January 2006 letter from Mike Dunkley, Managing Director of Sutherland Housing (bought by Genesis), they were:

aware that this has been a problem for a long time. Initially, our response was to carry out repairs as and when required but this has not improved the functioning of this alarm. When this scheme was initially built, LB of Brent asked that we provide a fire alarm as part of their health and safety policy due to the number of flats in one building. At present the fire alarm is disabled. We have obtained verbal quotes for the provision of a communal fire alarm and individual alarms in flats but we have not pursued this to date because we have been waiting on consent from LB of Brent.

‘Value for money’ over residents’ concerns

But instead of communicating consent or implementation dates, the housing association told residents in 2009 that it was no longer legally obliged to supply the fire alarm; and that it would be better not to as it would cost £20,000.

Residents believed this was £20,000 Genesis identified as savings within its 2015/16 accounts [pdf p16]. But a spokesperson for Genesis told The Canary that it was wrong to infer this:

But they also alluded to the fact that it was identified that year:

Genesis did not supply a copy of this assessment, however.

According to underwriters residents contacted, if Genesis is not complying with regulations, the insurance wouldn’t be valid. Which is why residents repeatedly asked for the fire safety risk assessments. But residents claim that, until October 2016, they had not seen any reference to one. And then, it was only a list of fire risk actions that came from an assessment.

What do you need a fire alarm for?

One resident told The Canary she had to buy her own battery-operated smoke alarm when hers stopped working. Because it was hard-wired to the faulty fire panels that Genesis would not replace.

She also said they failed to fix a low-hanging door that a surveyor said was not compliant with fire safety rules.

The Canary fed back the concerns raised by residents to Genesis, and a spokesperson responded:

Common fire alarm systems are not the recommended approach at the blocks in question, as they are purpose-built general needs buildings and have ‘stay put’ evacuation policies in place. This means that residents do not have to evacuate the building in the event of a fire, but should do so if they feel unsafe, wish to evacuate or are told to leave by the Fire Brigade.

Fire risk assessments were recently carried out at both blocks which confirmed that this approach remains the best one to take in the interests of resident safety.  We are in the process of reviewing the assessments and implementing further recommendations made for reducing risk in the event of fire.

An email sent to residents in September 2016, seen by The Canary, stated there were no fire risk assessments in place at their blocks.

And fire safety is not the only complaint that residents have. Residents also complain of the non-replacement of a rotten wooden window frame that fell to the floor in 2010; and the failure to replace an entrance door, damaged after a break-in in 2015. In addition, they say Genesis would not replace faulty car park lights, which provoked intervention from local Labour MP Barry Gardiner; particularly as the issue had been ongoing for several years. Residents also complained of a mice infestation, and no evidence of contractors carrying out services.

And these sentiments toward the housing association haven’t come from one isolated block. A 2014/15 residents’ survey shows that residents have lamented Genesis’s poor communication, opaque service charges, and inadequate actions to complaints.

A spokesperson from Genesis had this to say:

Yes, our property portfolio team are reviewing this [wooden frame and entrance] and will let residents know when replacement has been added into this year’s cyclical works programme.

Invoices are provided on request, but our service charges team received no queries or disputes in relation to this in the 2015/16 cycle when pest control was carried out in communal areas.

We only provide pest control in communal areas.  Within flats it is the responsibility of leaseholders to organise pest control, and this has been confirmed to residents.

There is a new estates services contractor for this development as of November 2016, with responsibility for services including communal cleaning, grounds maintenance and bulk waste removal.  The move towards streamlining this service was driven by wanting to ensure consistently high standards of service delivery for all of our customers.  The contractor attends [the block in question] to a regular schedule to carry out cleaning and maintenance of communal areas.  Now that this has had time to bed in this move is delivering tangible improvements to service delivery.

We have engaged closely with residents and the residents association in working to deliver improvements to service delivery and conditions at [the block in question].  This has included visits by senior staff to the development, a new Neighbourhood Assistant role, quarterly inspections of the development and training of staff within our contact centre to enable then to respond directly to residents’ enquiries.

Residents feel Genesis treats them as a nuisance. And as one resident told The Canary:

While maintenance and management of tenants concerns have been going downhill and properties going into disrepair, Genesis Housing Association have been buying up and selling cheaper properties to make way for new-build housing.

Genesis is building hundreds of new homes each year. Around 815 a year according to its last Annual Review.

It made an overall surplus of £27.3m [pdf p6] while driving down relative operating costs from the previous year.

And while founded on the principle of providing affordable and social housing to the most vulnerable, it has now abandoned this mission, blaming cuts to government funding for social housing; while also sponsoring the thinktanks that influence government policy, thus supporting their arguments for deregulation and full privatisation.

But it’s in light of the recent and devastating fire at Grenfell Tower that residents want Genesis to start acting. Particularly after the 2014 fire of an East London, Genesis-managed property, with harrowing reports.

Residents act as leaseholders in Genesis-managed properties in both rental and shared ownership units. They are at the mercy of what the housing association will do, or at least commit resources to doing.

But the minimum they’ve asked for is not too much. It’s a question of safety. Whether Genesis has a legal requirement to install the fire alarm or not is moot. It has seemingly done nothing to calm fears or take reasonable measures to ensure residents feel safe. A feeling that is plaguing residents from affordable and social housing across the country. And it adds to the current housing climate that allows tenant welfare to come second to profit.

– Sign the petition to urge increased pay and improved conditions of service for firefighters across the country.