Theresa May has given Jeremy Corbyn a boost no-one saw coming, says an award-winning writer - The Canary 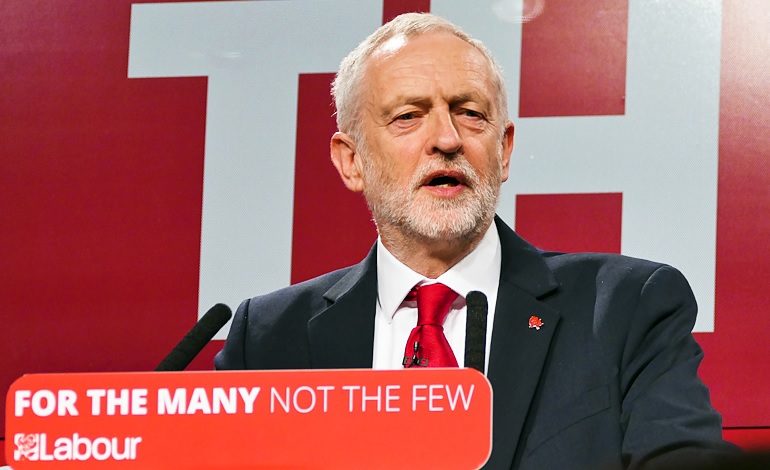 No-one could predict Jeremy Corbyn’s rise to become a Labour leader with the biggest increase in vote share since 1945. Except Alex Nunns, who’s been watching Corbyn since his first TV hustings in Nuneaton. Nunns wrote his second book, The Candidate: Jeremy Corbyn’s Improbable Path to Power in 2016, which won the Bread and Roses Award for Radical Publishing in June 2017. He spoke to The Canary before the new year on how Corbyn’s rise was not just “summer madness”, as Guardian columnist Polly Toynbee once coined it.

Now after an incredible general election that provided the huge boost to the left no-one was anticipating, The Canary caught up with Nunns again for his thoughts on what’s been happening over the last half year.

The last time we spoke to you, Corbyn was battling the internal politics of the Labour party in November 2016. What’s been going on since then?

Well, everything was looking bleak with the whole movement demoralised.

There was the big ruckus when Jeremy Corbyn whipped the Labour party into voting for Article 50. And that caused a division probably for the first time in the movement behind Corbyn. Because some people thought that the decision was wrong while others saw it as a political necessity.

And then you had outright sabotage from within the party like the leaking of canvas returns for the Copeland by-election, which showed Labour was on course to lose, damaging Labour’s chances. And the local elections were looking bad too.

Then Theresa May called a snap election and changed politics in this country by boosting the left, which no-one possibly thought could happen.

Now while he didn’t win he’s the only Labour leader other than Tony Blair to get 40% of the vote, since 1975, which is the biggest increase in vote share since 1945. Labour gained seats for the first time since 1997. And the turnaround in the six/seven weeks of the campaign is the biggest vote turnaround anyone has seen in British politics.

Now everyone is elated. But its the backdrop of despondency coming into the general election that makes that elation more extreme. Because it seemed so unlikely.

.@alexnunns has won the Bread and Roses prize for his book the Candidate, foreshadowing the Candidate himself's inevitable win for PM. pic.twitter.com/ZQuSOMHrQ5

What was it about Corbyn’s election campaign that saw him achieve such success?

One [factor] is that as soon as the election was called, Corbyn and his team were in charge of their campaign. They didn’t have to answer to other MPs. They were immediately very bold. And they ran a really skillful election campaign, which was already going before the election was called. Because they released some really good policies like £10/hour minimum wage and free school lunches for the local elections. So they already had a running start, unlike the Tories who seemed completely surprised by the snap election themselves.

Then you had the manifesto launch, which even though it was leaked, helped popularise the policies. And the Tories had the worst manifesto you could imagine.

The broadcast media was also more impartial this time. The press may not have been but the broadcast media had to give the candidates equal air time. And even though it wasn’t completely unbiased, people got to hear his messages.

The social media campaign really took off and the whole movement behind Corbyn was reanimated. You had thousands of people going to marginals to get behind Corbyn. And all those elements came together really. That background element, the media coverage and the fact that Jeremy Corbyn was just unleashed from the day to day grind of Westminster and his own party sniping at him. And he could go out there and give a bold message that connected.

You’ve been watching Corbyn quite closely. How do you think he’s changed as a leader?

I was actually watching this thing with two comment journalists on Sky News at the end of the election campaign. They were saying that Corbyn was a man transformed. I just think that’s complete crap.

I remember the first TV hustings he did on Newsnight with an audience of swing voters in Nuneaton just after the ballot and nobody knew who he was. Jeremy Corbyn brought the house down. He got rapturous applause for everything he said while others got none.

And there was this revelation that there was this politician who could speak in normal English, that people could understand and that could address issues head on whereas others weren’t.

I remember one of the moments in that debate where a fireman who voted UKIP was outraged at the cuts, especially to the fire service. And it was Liz Kendall who answered him and dismissed him saying we have to have fiscal credibility. That was before Brexit but sums up what Brexit was about. You had people on the receiving end of austerity, not necessarily left wingers, that this is going too far. And the political class, this time represented by Liz Kendall, saying we’re not even going to engage with what you’re saying.

But Jeremy Corbyn was taking people’s questions and giving them his view. An audience of swing voters wouldn’t have even agreed with his view but they respected that he was giving a straight answer.

And that was right at the start and to me it looked like something was happening. The politics wasn’t as that presented by the commentators, something else was going on.

Do you think independent media outlets have had any role in the rise of the left?

And all of them are providing an alternative perspective.

Because if you remember in the past, those on the left only had The Guardian, The New Statesman and the BBC as their window into what’s happening in the world. And that’s really demoralising. Because they’ve all been demoralising the Labour leader for the last couple of years. So new media outlets have transformed the landscape.

I still think in the election, The Sun and The [Daily] Mail attacking Jeremy Corbyn had an effect because the Tory vote was massive. But that only appealed to a segment of the population. There’s a whole other segment that recants against that sort of coverage. And you saw that the way that ideas and memes spread via independent media, giving a completely different perspective.

I'm proud of these words about my book from John McDonnell. Pls share & help spread the word if you want to. To buy: https://t.co/jIwG1e7an6 pic.twitter.com/5LyL7EYzx4

Now the minority Conservative government has a deal with the DUP. Is a Tory government sustainable?

The most important thing the Tory government have to deal with is Brexit. And within the party are two completely irreconcilable parts. People who are absolutely determined to stay in the single market, emboldened by the Brexit vote. And on the other hand, Brexit fanatics, who see this as a once-in-a-lifetime opportunity.

That could lead to resentment in the Tory party and make it difficult to get things through parliament. And we’ve already seen the government gut the Queen’s speech of anything meaningful.

It’s quite easy to see how that could all fall apart. The only thing that will keep them together is that the Tories are absolutely petrified of Corbyn winning an election. That will discipline them a bit.

The media’s attitude to the left seems to have changed. Do you think there’s been a dent in the ‘establishment’?

Yes. But I expect them to… ‘undent’ themselves… if that’s a word.

It’s interesting to see the media are broadening their choice of guest. Kerry-Anne Mendoza on Newsnight for instance.

But they’re not broadening it enough to represent the new political situation. Considering that 40% of the electorate have just voted for a new radical manifesto from the Labour party.

Then when you turn on BBC‘s This Week, there’s a host who’s a right-winger, there’s Michael Portillo, who’s right-wing, there’s Alan Johnson who’s as right-wing as the Labour party can go.

Any broadening that has happened, they’ll partly try and close off. Getting back into the daily grind at Westminster, that ‘establishment’ facade will reconstitute itself.

Is it tough times ahead?

Well we’ve already been through the toughest 21 months. They’ve thrown everything they could possibly throw at Corbyn and its not worked. He’s going to have an easier time from his own MPs, in parliament. He’s got solid and confident support from members of the party so he doesn’t have to worry about them sidelining him. The media can’t sneer at him because he’s proved himself in an election. The three pretexts that they used against Corbyn were that he’s unelectable, he’s not a leader and he’s incompetent. They’ve all fallen away.

They’re chanting his name in the middle of Glastonbury. That’s leadership of a different kind we’ve seen in British politics.

– Read The Candidate: Jeremy Corbyn’s Improbable Path to Power from OR Books by Alex Nunns.

– Read and support other independent media outlets that hold the powerful to account.