Theresa May just received some very, very bad news. And it will take a small miracle for her to survive it - Canary Workers’ Co-op 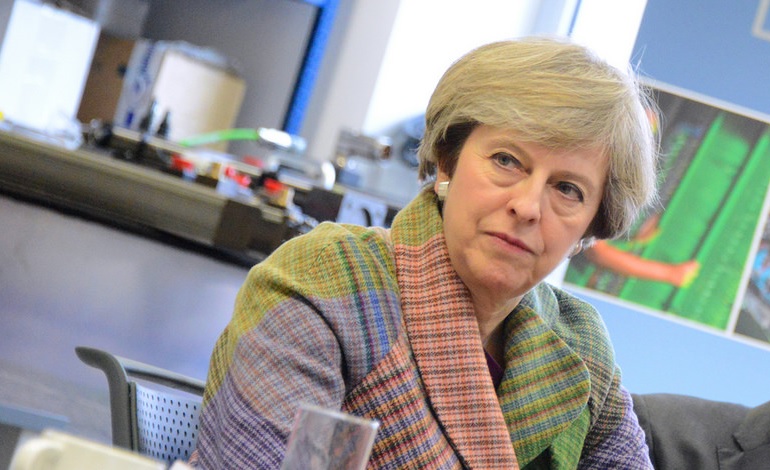 The high court has now granted rights group Liberty permission to bring a legal challenge against the British government. The case will contest one of Theresa May’s flagship policies as Home Secretary, the Investigatory Powers (IP) Act; commonly known as the Snoopers’ Charter.

If the challenge is successful, it will take a small miracle for May to survive as Prime Minister. Because she’s largely responsible for the extreme law’s existence.

Liberty’s legal action would see a number of the mass surveillance elements of the act put in the dock. The high court’s decision also came as a swathe of rights advocacy groups and individuals wrote to the Tory government urging it not to sacrifice citizens’ security in its increasingly draconian anti-terrorism policies.

‘See you in court’

The IP Act essentially removes UK citizens’ right to privacy. It forces internet service providers (ISPs) to store a record of our emails, phone calls, texts and web browsing activity. And a long list of officials are able to access those records. It also allows our security services to hack devices, and legitimises their own collection of our data in bulk.

It is an act that codifies George Orwell’s 1984 into law. While you don’t see Big Brother beamed through your television screen like in that book, make no mistake, he is there. In fact, he’s everywhere.

Liberty announced its victory against the act on 30 June. The group’s director Martha Spurrier said:

We’re delighted to have been granted permission to challenge this authoritarian surveillance regime.

The Government doesn’t need to spy on the entire population to fight terrorism. All that does is undermine the very rights, freedoms and democracy terrorists seek to destroy.

If they truly want to keep us safe and protect our cybersecurity, they urgently need to face up to reality and focus on closely monitoring those who pose a serious threat.

The group has now applied for a cost-capping order for the case; this would set an upper limit to costs. If granted, the case will then be listed for a full hearing. It will challenge four elements of the act:

Meanwhile, 83 organisations and individuals sent a letter to five governments, including the UK. These governments are all members of the ‘Five Eyes’ alliance, a surveillance partnership between the US, UK, Canada, Australia and New Zealand.

The letter urged ‘Five Eyes’ countries to support stronger encryption, not attempt to weaken it. The UK government has, however, regularly called for the state to be given access to encrypted communications following recent terrorist attacks in the country. But in the letter, the rights groups and individuals argue:

While the challenges of modern day security are real, such proposals threaten the integrity and security of general purpose communications tools relied upon by international commerce, the free press, governments, human rights advocates, and individuals around the world.

May’s government has found itself inside a courtroom over its spying before. In October 2016, the Investigatory Powers Tribunal ruled that the UK government had broken its own spying laws for 17 years; while in December 2016 the EU Court of Justice found that the UK was breaking the law in its indiscriminate collection of people’s information. And rights groups brought another case in October 2016 at the European Court of Human Rights.

Now, the UK government is on course to face questions over its spying in its own high court. If, that is, Liberty manages to secure a costs cap and raise the money needed for the case. Let’s hope it succeeds. Because these groups believe this draconian law is harmful to the security services’ ability to combat terrorism. And they believe it is harmful to the fundamental rights of people in the UK.

In short, they argue that the IP Act is drowning those tasked with protecting us in too much information, while leaving the people with a drought of rights. That’s no way to run a functioning democracy at all.

– You can help Liberty with its fundraising here.

Featured image via the Science and Technology Facilities Council/Flickr