In just seven words at PMQs, Jeremy Corbyn voiced what millions of people are thinking [VIDEO] - The Canary 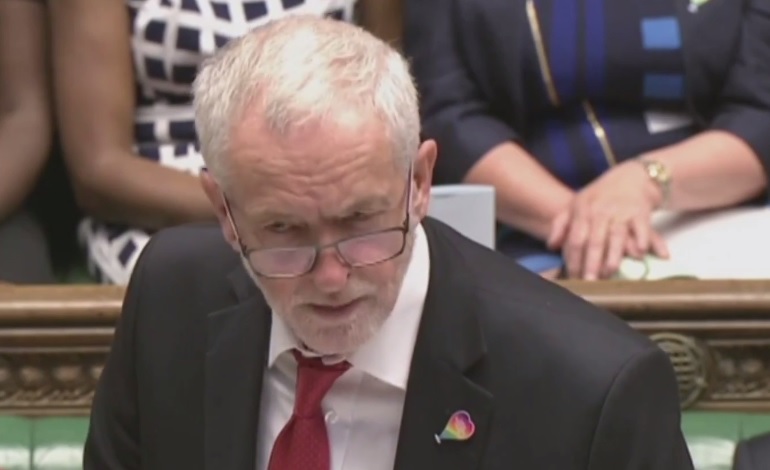 In just seven words at Prime Minister’s Questions (PMQs), Labour leader Jeremy Corbyn voiced what millions of people in the country are thinking. And it throws into doubt the Conservatives’ readiness to do the job of leading Britain forward.

The Conservative Party, with help from the Democratic Unionist Party, successfully voted down a Labour amendment to the Queen’s speech that would have given public sector workers a much needed pay rise on 28 June.

So Corbyn raised the pay issue with May. And with private sector pay also not rising with the rate of inflation, he questioned what the Tories have done to people’s living standards over the last seven years. In response, May listed what she sees as successes. She mentioned record numbers of people being in employment, the introduction of a living wage, and the increase in the personal allowance for income tax.

After much supportive jeering from the Tory backbenches, Corbyn replied:

The Prime Minister simply doesn’t get it.

This provoked much more disgruntled jeering from May’s ‘team’, leading the speaker to intervene. He said:

People who are making an excessive noise should try to calm themselves and perhaps just give a moment’s thought to whether they would like to be viewed by their constituents shrieking their heads off.

The exchange summed up what many people think. Because May’s response didn’t take seriously, or even acknowledge, that much of the ‘record’ employment is in low-paid, insecure work. Nor did she mention that many don’t earn the living wage. And although her government has increased the personal allowance, the poorest 10% of households now pay more in tax than the top 10% as a proportion of income.

But the Prime Minister doesn’t at all seem “to get” that these details are important.

The Tory government’s NHS record also leaves a lot to be desired; both in care for its workers or the service as a whole. But May doesn’t seem “to get” that people are aware of these issues either. Because she opened PMQs with a statement that gave the Labour benches an open goal:

Today marks the 69th anniversary of the NHS… and last week saw the 80th anniversary of the 999 service; and I know that members across the house will want to join me in paying tribute to the incredibly dedicated men and women who work tirelessly to save and improve lives day in and day out.

The jeering from Labour benches almost drowned out May’s words by the end of that opening statement. Because not only did her party cheer when it successfully stopped these “incredibly dedicated” health workers getting a pay rise. But her government’s choices have also seen the service brought to the brink of bankruptcy, and vast swathes of the NHS sold off.

There’s a vast chasm between the Tories’ assessment of their own choices and the real impact they have on people’s lives. Corbyn himself in fact provided a very different appraisal at the end of the PMQs session:

This is the only country in which wages have not recovered since the global financial crash. More people are using food banks. Four million children living in poverty. Record in-work poverty. Young people who see no prospect of owning their own home. And six million earning less than the living wage. The low pay epidemic is a threat to our economic stability.

Despite May’s talk of progress and a strengthened economy, many people in reality are either stuck or regressing. And that’s because, whatever progress is being made, it isn’t orientated in their direction.

Until the Tory government shows that it ‘gets’ this, it’s not showing good leadership at all. Quite the opposite in fact.