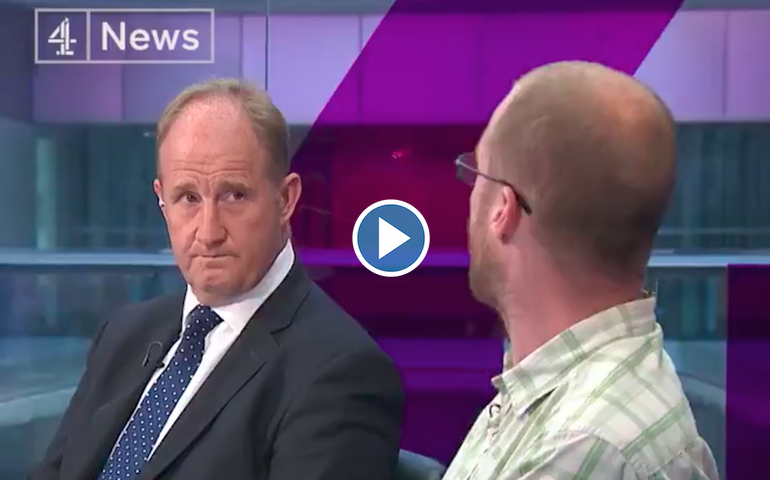 A Grenfell local patiently explained the impacts on residents of the government’s repeated failures to deal with the Grenfell tragedy to a Conservative MP on 5 July.

Joe Delaney, a local resident and campaigner with the Grenfell Action Group (GAG), told Conservative MP Kevin Hollinrake that Kensington and Chelsea Council had proved itself “wholly unable to deal with” the Grenfell tragedy. Speaking on Channel 4 News on 5 July, Delaney said:

Why don’t you send someone to help my neighbour, Paul Dillon, who’s lost his job today as a crane operator because he’s taken so much time off from the tragedy. But [he] was there as the building burned and offered translation services that night. You know? The council are wholly unable to deal with this. The council have got money, they’ve got credit cards, they’ve got phones. All people needed in the first instance was a hotel. And even that couldn’t be arranged.

Instead, Delaney explained, local voluntary groups have had to step in:

The group at the moment who’s been offering the most support is a group called The Real Community… It’s an umbrella group of all the local voluntary organisations and they are now a well-oiled machine. No, they were not perfect from the outset. No one expected them to be. You know, this was unprecedented, as people keep saying. But my God they tried, and my God they improved, and my God they listened.

What flagship? The Titanic?

Hollinrake, who used to sit on the Communities and Local Government Select Committee, was clearly uncomfortable with the revelations, and repeatedly said he understood residents’ concerns:

I quite understand, you know. I’ve been down to Grenfell, I’ve been into the houses of people who’ve been affected by this tragedy. I understand the anger, the lack of trust. In terms of what has happened that’s positive, are the £5m set aside, £2.5m of that has been distributed, offers of accommodation have been made.

But Delaney suggested Hollindrake didn’t quite understand the scale of those concerns when he drove his point home:

Kensington and Chelsea is supposedly a flagship council. You know, what flagship? The Titanic?

A member of the Grenfell Action Group confronts a Conservative MP over the lack of help & services for survivors in the wake of the tragedy pic.twitter.com/eA46vMn9vw

As The Canary has previously reported, Grenfell residents have been let down by a devastating catalogue of government failures. The top of government failed to act on a safety review. The landlord ignored tenants’ warnings. Theresa May couldn’t even bring herself to meet residents. The Conservative leader of Kensington and Chelsea Council blamed residents for a sprinkler system not being installed. And the council tried to ban the public from the first cabinet meeting of senior councillors after the tragedy.

Both Theresa May and Sajid Javid (Secretary of State for Communities and Local Government) have been forced to apologise for the failure of the state in the wake of the fire. May has said:

People were left without belongings, without roofs over their heads, without even basic information about what had happened, what they should do and where they could seek help. That was a failure of the state, local and national, to help people when they needed it most. As Prime Minister I apologise for that failure. And as Prime Minister I’ve taken responsibility for doing what we can to put things right.

And Javid has said there were:

serious failings in the immediate aftermath; failings that created unnecessary suffering for residents who had already suffered too much.

Kensington and Chelsea is one of the richest boroughs in the richest city in one of the richest countries on Earth. Yet its people were left to burn to death in a sub-standard tower block. The state failed to protect them from the tragedy. Then, once tragedy struck, the state failed to supply their basic needs. Thankfully, the local community stepped into the vacuum and took control. But the fact that it had to do that at all is an absolute scandal, as well as a tragedy.