May hopes to influence Trump at the G20 summit. But she can't even influence her own coalition. - Canary 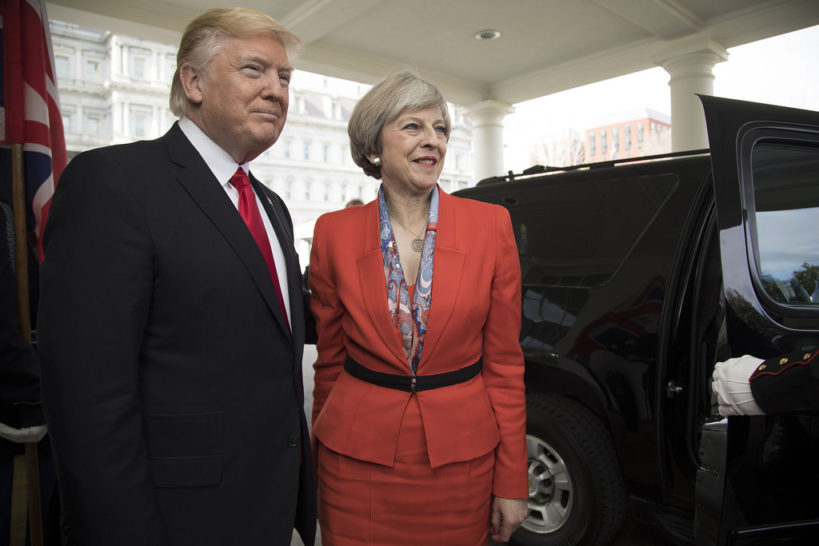 Theresa May plans on having one-to-one discussions with Donald Trump at the 7-8 July G20 summit in Germany. These will reportedly include a conversation about the US President’s hard-line approach on global climate change. But when we look at her own coalition’s record and views on the issue, there’s very little to be hopeful about.

So many things to talk about…

Trump, who controversially withdrew from the Paris accord on 1 June, has a long history of tweeting about global warming and climate change. In fact, he’s reportedly tweeted climate change scepticism over a hundred times. Here are just a couple of examples:

It snowed over 4 inches this past weekend in New York City. It is still October. So much for Global Warming.

Ahead of the G20 summit, a spokesperson for Theresa May said:

The Prime Minister is expected to raise climate change with the President, stressing that the UK remains fully committed to the Paris Agreement.

She will say that we don’t see any need for renegotiation – we support the Paris Agreement because it delivers.

How committed to action is she, though? Really?

First, the Conservatives recently reached an agreement to work with the Democratic Unionist Party (DUP), whose 2017 manifesto not once mentioned the words ‘environment’ or ‘climate change’. In 2016, meanwhile, the DUP’s environment minister Michelle McIlveen actively opposed a Northern Irish climate change act, meaning that Northern Ireland has no binding plan for cutting emissions, unlike other parts of the UK. At the same time, as The Canary previously reported, denial of climate change is not officially a DUP policy; but DUP MP Sammy Wilson is an outspoken climate change sceptic. And according to the Director of Friends of the Earth Northern Ireland, James Orr:

The Tories themselves, meanwhile, will be adding a third runway to Heathrow to make it one of the world’s largest airports. Although absent from the Queen’s speech, transport minister Lord Callanan has confirmed the expansion; which will come at a devastating cost to the local wildlife and ecosystems, increasing vehicle emissions and sound pollution to surrounding areas. Speaking at the ABTA Travel Matters conference, Lord Callanan said it wasn’t included in the Queen’s speech because “it does not require legislation”. And he insisted: “Heathrow is proceeding and we are committed to it”.

In spite of significant opposition to fracking, meanwhile, the Tories have been granting fracking licences around the country; and even in national parks. At the same time, they’ve been propping up the ailing fossil fuel sector with subsidies – a move the competition watchdog has warned against – while scrapping subsidies for renewable energy. This is despite the efficiency and popularity of greener alternatives.

Throwing stones while living in a glass house

Given the record and views of the Tories and their DUP bedfellows, and the fact that one of Theresa May’s first acts as Prime Minister was to disband the Department for Energy and Climate Change, the idea that May’s Conservatives could have any influence on Donald Trump is laughable.

If May is really to have any impact on Trump’s position on the environment, shouldn’t she first take a look a bit closer to home?

– See more Canary articles on the DUP. And make your thoughts on the Tory/DUP deal known. Contact your MP and be vocal on social media.