Millions are watching one young poet talk about her humanity, because it’s absolute fire [VIDEO] - Canary 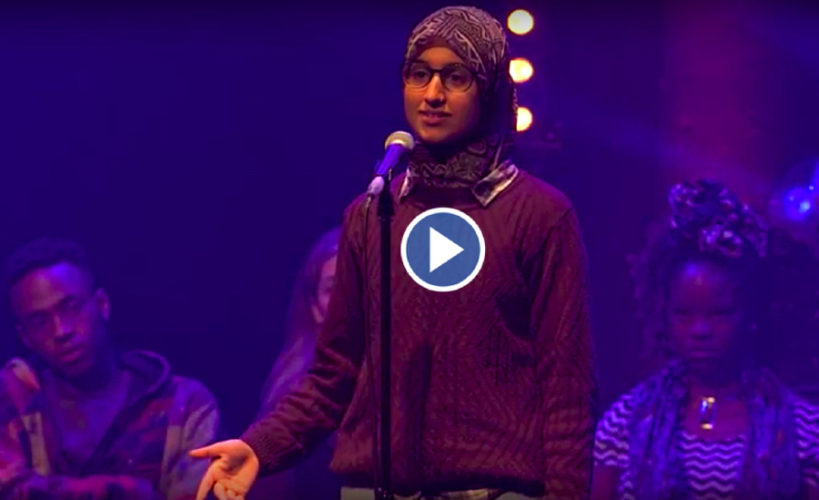 Over a million people have watched a video of young poet Suhaiymah Manzoor-Khan reciting her entry at The Last Word Festival in London. Manzoor-Khan shares her powerful insights into the real problem around integration in society, arguing that Muslims like herself are considered less human than others.

She starts by explaining how she thinks she should relate to her audience:

Write a humanising poem,
my pen and paper goad me.
Show them how wrong their preconceptions are,
be relatable.
Write something upbeat for a change,
crack a smile.
Tell them how you also cry at the end of Toy Story 3,
and you’re just as capable of bantering about the weather in the post office queue.
Like everyone, you have no idea of how to make the perfect amount of pasta, still.

But this isn’t the poem Manzoor-Khan wanted to write. She didn’t want to write another “Muslims are like us” poem. And in defiance, she says that she “refuses to be respectable” – urging those listening to accept her and other Muslims regardless. And she touches on a key point.

Because as the buzz around her poem is growing, Citizens UK have released a report called ‘Missing Muslims’. It was commissioned by the UK government, which is concerned about:

significant skepticism across British society about the integration, and even the shared allegiance, of their British Muslim fellow citizens

The intention of the report isn’t bad. The premise however, is slightly off. The presumption that British Muslims don’t share the “Britishness” of their non-Muslim peers is apparently a widespread belief across British society. But it is by no means a commonly-held feeling amongst Muslims. Research shows that Muslims don’t feel any less British than anyone else and that they’re even overrepresented amongst those that vote.

But the concern in the report is that Muslims don’t feel welcome, which is why in some respects, Muslims become under-represented in public and civil life.

And there are some damning reasons why.

The report points to some fundamental failings including by the government and the media.

British counter-terrorism policy like the Prevent strategy for instance has backfired. Prevent is designed for people in positions of trust and authority to report behaviour they deem suspicious or worrying. But the outcomes have often been farcical. And the effect has been of marginalisation and demonisation, eroding trust and even the discrimination against Muslim children.

Then there is the media. The report admits the media can exaggerate, and have inferred that Muslims were somehow planning a ‘takeover’. But in addition, many mainstream media outlets have platformed voices from the far-right political spectrum with, arguably, Islamophobic views. And in one case, such views may even have been the motivation for a hate crime.

Suffering not as great

Manzoor-Khan’s mother also called her after the news of recent terror attacks. To check she was OK, not just because of the attack, but what might come afterwards.

And whether the media decide subsequent attacks are crimes of terror or crimes of hate, crimes targeted against Muslims are increasing in number and horror. And the attack at Finsbury Park mosque by an alleged white supremacist, mirrored the same tactics used in attacks in Westminster and London Bridge. While a spate of recent acid attacks appear to be an act of collective punishment against Muslims. But their aftermath seem to lack the same sombre mood or outrage.

Which begs the question why the suffering of the collective Muslim is not considered as great. And suffering, or acts of solidarity, are only seen as on par with the rest of the nation’s when the gestures are big.

If the situation is in any way similar to the US, where a study found that “terror attacks” carried out by non-Muslims receive four and a half times less media coverage than those committed by Muslims, then such a consequence of endemic dehumanisation is the real concern.

Manzoor-Khan isn’t speaking in response to any report but her words are a heartfelt rendition of what some Muslims are feeling. And for the first time, the government is coming close to uncovering its own failings.

Citizens UK points to some good solutions. The findings that those with fewer opportunities and who experience more discrimination are less likely to integrate falls in line with research that suggests this increases dissatisfaction. And this could make people feel more isolated and less served by the state, which in turn may not be in its best interests. So to increase access to those opportunities is not un-meaningful.

But Manzoor-Khan’s already been reduced to having a difficult conversation. About when she is and isn’t considered ‘human’. A ‘good Muslim’ “like us” or a ‘bad Muslim’ “contributing nothing”. And whether even having those conversations might be considered radical. Because in her own words:

There is nowhere else left to exist now.

– Read more articles from The Canary on Islamophobia.