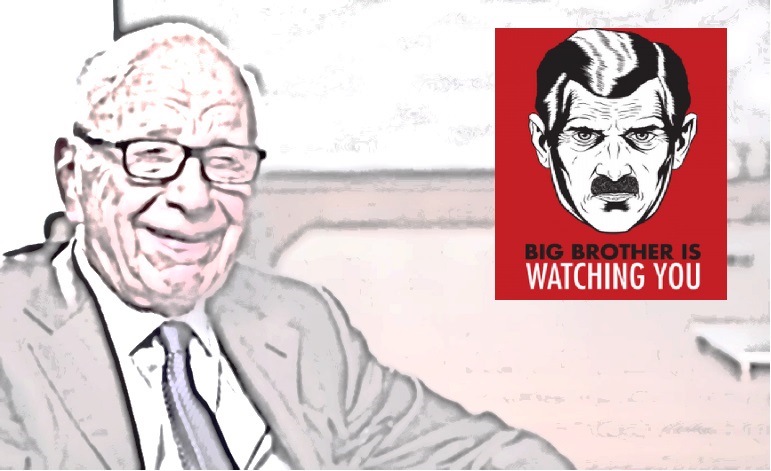 Rupert Murdoch could soon be able to “control people’s access to the internet, TV, digital radio and emails.” And, like something out of the George Orwell novel 1984, the boss of Sky News and The Sun could use his power to influence the political thinking, and ultimately the voting behaviour, of more than 13 million people.

Murdoch could soon take control of a database of around 13 million household’s personal information and consumption habits. This is because he is currently bidding for full control of Sky. And the government is due to make a decision on the planned Murdoch takeover of the channel by 21st Century Fox next week.

But if the deal goes ahead, Murdoch will have full access to people’s private information via Sky’s customer records. This would include records such as people’s phone calls, internet search history, emails and viewing habits.

According to six members of the House of Lords, Murdoch’s access to the UK’s “most sophisticated privately held domestic… database” could leave it open for “misuse”. They say that it is “a very grave threat to our democratic process”.

Big Brother really would be watching you

But what is more concerning is that the government has, according to both the group of peers and Labour’s Chi Onwurah, not even considered the fact that there could be a problem with Murdoch controlling the database.

…control people’s access to the internet, TV, digital radio and emails. As an internet service provider, you can speed up or slow down certain websites to control what people see. And if you own all these channels, you’d be able to influence people very subtly. It wouldn’t even necessarily be overtly politically, it could just nudge you in a certain direction by filtering the messaging you receive. And those messages could be completely different from the person next door. What I find most scary about this is how certain news and information could simply be filtered out.

The proposed Murdoch takeover of Sky has repeatedly hit the headlines. If the deal goes ahead, it would see his control of Sky go from 39% to 100%. As it stands, the media regulator Ofcom has given the green light for the deal. But after interventions by a cross-party group of MPs, including Labour’s Ed Miliband and former Tory Chancellor Ken Clarke, Culture Secretary Karen Bradley is considering referring the deal to the Competition and Markets Authority (CMA). Her decision is expected next week.

[Fox] remains committed to continuing to engage constructively with the regulatory process. Our investment in Sky underscores our profound confidence in the future of the UK as a global hub for creativity. And in light of the transaction’s benefits to the UK creative economy we would welcome a timely decision.

The UK has enough of a problem with press freedom as it is. For example, we currently languish at 40th on Reporters Without Borders Press Freedom Index. And seven national newspapers are controlled by just six billionaires. So, Murdoch’s proposed takeover of Sky would compound an already grave problem. But for the billionaire with a dubious reputation to have access to a treasure trove of over 13 million people’s information is terrifying. If we didn’t already have enough of a problem with democracy in the UK, things could be about to get a whole lot worse.