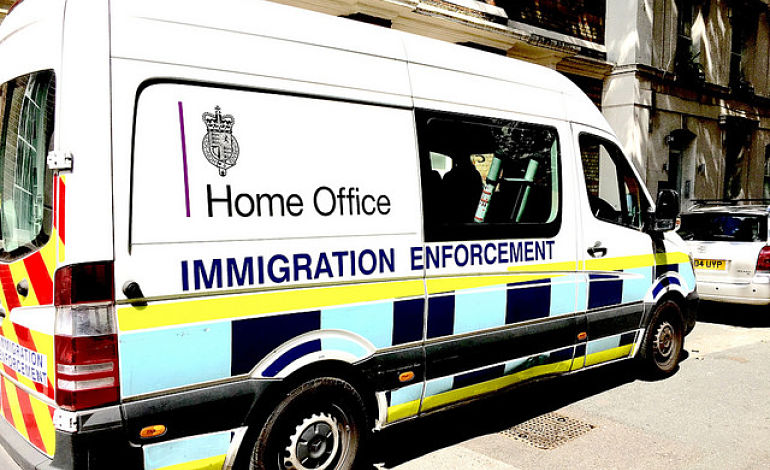 Posters that are cropping up in London are likely to annoy the Home Office. This is because they raise awareness about the collaboration between homeless charities and department officials that is leading to unjust deportations.

The posters are part of a ‘subvertising’ campaign to raise awareness about the collaboration.

As The Canary reported in March 2017, a Corporate Watch report found that the charities had been working with Immigration Compliance and Enforcement (ICE) officers on patrols targeting rough sleepers in London. It also said that outreach teams routinely pass on the locations of non-UK rough sleepers to ICE officers. And the Greater London Authority allegedly contracted the charities under a “payment by numbers” scheme. That is, the more rough sleepers they help to deport, the more money they earn.

Hey @StMungos & @ThamesReach, the message now seems to be all round the underground. How much longer before you #CutTheCollaboration ? pic.twitter.com/ghhcAdUk90

Most of the targets were from the European Union or the European Economic Area. The Home Office has justified its actions by saying:

But to claim these groups come to the UK for the purpose of sleeping rough is “absurd”, according to refugee charity Sanctuary on Sea.

As the North East London Migrant Action (NELMA) group points out, the Home Office’s policy effectively criminalises homelessness for non-UK residents. And the collaboration allows the charities’ workers to refer individuals and share their private information without their consent. In effect, it acts as an extension of the border authority. NELMA says this means:

that even someone with a job or permanent resident status can be detained without charge and removed to their country of origin. Many of those affected by this divisive new policy have lived in the UK for years, usually working and paying tax. They end up on the streets due to harsh welfare rules that limit their entitlement to benefits. Some rough sleepers may also have substance use or mental health issues.

Two stories on its website show how easy someone’s life can turn upside down – from having a home to living on the streets. This can even be the case while they’re earning some money.

What the charities say

At the time, both St Mungo’s and Thames Reach responded to the report. Howard Sinclair, Chief Executive of St Mungo’s, said:

under current UK legislation, there are vulnerable people that are not eligible for support or housing and as a result are left destitute on the streets. When returning home is the only option for a vulnerable individual sleeping rough, we have to ask ourselves what would happen if we didn’t get involved.

when we believe that individuals are at risk from living on the streets, where people are in extreme destitution, we will work with the Home Office to plan a way for them to return home.

The Home Office is keen to cut immigration by any means necessary. So this public awareness campaign could be a nuisance it doesn’t want.

– Get involved with the subvertising campaign through Protest Stencil.

– Tweet your support and snaps of any posters you spot alongside the hashtag #CutTheCollaboration.

– Read more articles from The Canary on immigration and deportations.