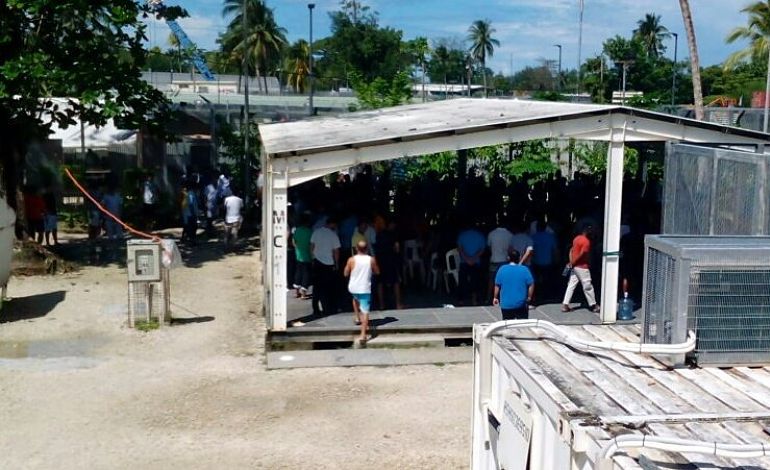 Just under 600 of the 800 refugees and asylum seekers detained on Manus Island (Papua New Guinea) by the Australian government have written a heart-rending letter – effectively an ultimatum – to Canberra.

Here is a photo of the letter and of the accompanying signatures:

A heartrending and desperate plea for compassion from almost 600 of Australia's political prisoners on Manus Island. pic.twitter.com/GJT1qcuVnW

The handwritten copy of the letter is here [pdf]. And this is a typed copy: 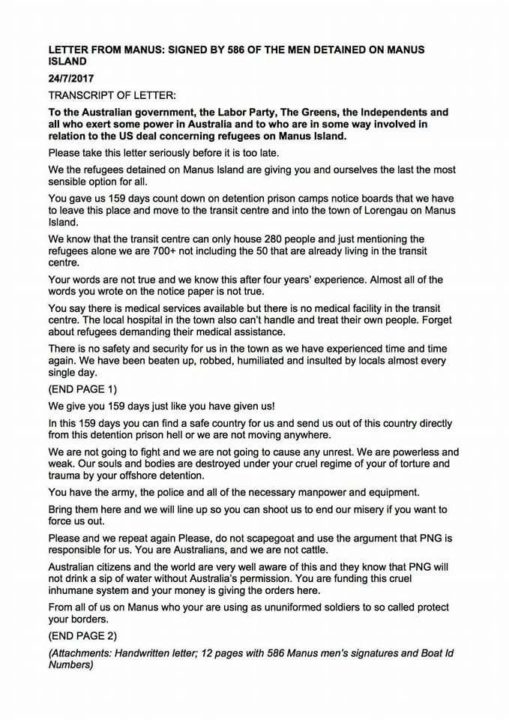 The letter is effectively a direct challenge by the refugees to the Australian government, saying:

We give you 159 days just like you have given us! In this 159 days you can find a safe country for us and send us out of this country directly from this detention prison hell or we are not moving anywhere.

They also explain why they cannot move into the wider Papua New Guinea (PNG) community:

We have been beaten up, robbed, humiliated and insulted by locals almost every single day.

Then comes a desperate ultimatum:

You can shoot us to end our misery if you want to force us out.

But just two days later, the refugees received a threatening letter from the PNG authorities: 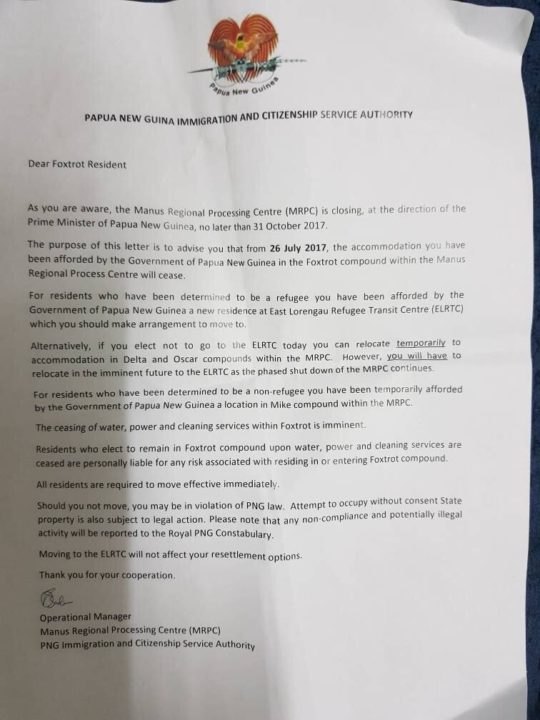 The PNG immigration authority makes it clear that recipients of the letter must immediately vacate their “accommodation” – or “residence”. Otherwise, they will face “legal action” and be reported to the Royal PNG Constabulary.

Meanwhile, demolition of the detention centre is currently underway so as to force the refugees into the wider but hostile PNG community. And as part of the process, water supplies and electricity have been cut. These measures follow a series of vicious attacks by PNG locals on refugees.

And in response, hundreds of refugees at the detention centre have taken part in a peaceful protest:

Protest in #Manus Detention over the water and power cut off.#auspol #newspoll pic.twitter.com/AROIsQKkQ6

In April 2016, the PNG Supreme Court ruled that the detention centre on Manus was both illegal and unconstitutional. And some months later, the PNG government forced Australia to agree to close the centre.

Australia and the US struck a deal to resettle the refugees at the end of 2016. But so far, not one refugee has been relocated. And only recently, a UN representative essentially accused the Australian government of deception regarding the deal.

So perhaps it is time to bypass Canberra altogether; and for the UN to work directly with the PNG government to airlift the refugees to a suitable and safe country before more attacks occur.

Guardian journalist Paul Farrell has consistently covered Australia’s refugee scandals over some years. And he is one of the better investigative journalists around. His coverage of the abuse of men, women and children held in captivity by the Australian government on Nauru has been exemplary. And his peers recognise his excellent coverage of state surveillance threats, particularly of journalists.

But Farrell is now leaving The Guardian; and with a blinder of an article, which exposes the lengths to which Canberra will go to minimise its refugee ‘problems’.

It's my last day and this is my last story for @GuardianAus – Here's a very sweary headline to cap it all off https://t.co/tL2NKmMSmz

It’s an angry article with an angry headline. It reveals how the Singapore-based company Statt Consulting has been paid at least A$15m by Australian taxpayers to dissuade would-be asylum seekers from travelling to Australia. And it reveals much more.

At a time when the current Australian government is under increasing scrutiny, this kind of journalism which holds the powerful to account is vital.