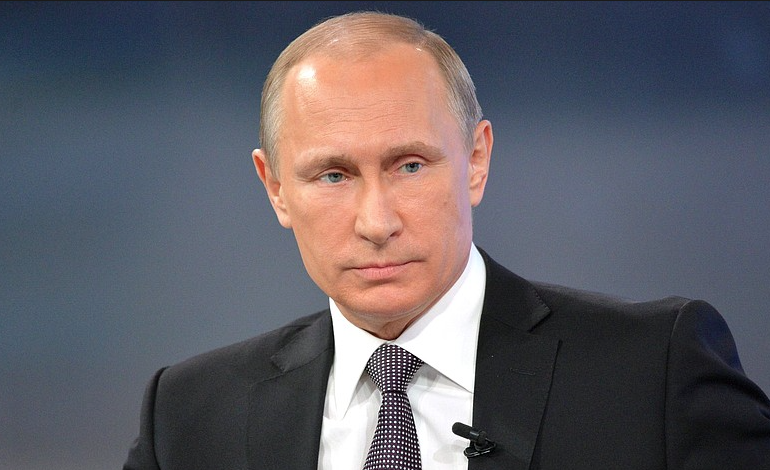 Like most leaders, Vladimir Putin depends on a relentless PR campaign to create his image. And the Russian leader has been created as the hard man of the East. That is, until we saw the picture of him and his wife wearing horrific shell suits.

So here are the equally godawful shell suits. Note also that one daughter (right) has matched her skirt to Putin’s flammable monstrosity.

The bare-chested, horse-riding, man’s man image is somewhat undermined by the above abomination.

Putin Schmootin. Anyone can ride bare-chested on a horse. Lady Godiva did it with a lot more style than THIS guy. pic.twitter.com/lS5xwypREv

But all joking aside, he’s not scary because he rides horses with his nipples out. He’s scary because he is as power-hungry and disrespectful of democracy as the rest of our current batch of crushingly disappointing world leaders. And with a large slice of sexism and homophobia to boot.

Putin is well-known for his alpha male view of the world. During an interview with Oliver Stone in June 2017, he made the case for why he (as a man) was better placed to lead than women leaders.

I am not a woman, so I don’t have bad days. I am not trying to insult anyone. That’s just the nature of things. There are certain natural cycles.

And during the US election race between Donald Trump and Hillary Clinton, Putin said:

At a minimum, a head of state should have a head.

But as NYMag asserted:

Most interpreted this to mean the head at the top of a man’s penis, not the brain container common to all humans.

Greetings to your president. What a mighty man he turns out to be! He raped 10 women — I would never have expected this from him. He surprised us all — we all envy him.

On the LGBTQI community

We can also expect Trump and Putin to enjoy their shared contempt for LGBTQI people. Putin has a long, dark history of persecuting the community within Russia and its vassal states. While Russia decriminalised homosexuality in 1993, abuse and violence against LGBTQI people is still widespread. And the government recently implemented a ‘Gay Propaganda Law’, banning public displays of affection between LGBTQI people, alongside the promotion of non-heterosexual relationships as equal or positive. Putin later gave a Russian state honour to the anti-gay politician behind the law.

The Russian leader also described it as his “duty” to stop gay people from getting married. He added “that doesn’t mean that there should be any persecutions against anyone”. But authorities have done little to nothing to stop the daily abuse meted out to LGBTQI people.

Putin was silent when Chechen authorities recently opened the first concentration camp for gay people. Authorities rounded up dozens of gay men, and later tortured and killed them in the camp. Meanwhile, in Russia proper, LGBTQI people are routinely abused, attacked, raped and killed by homophobic gangs.

Putin routinely equates homosexuality to child sexual abuse. He went as far as welcoming gay people to Russia for the 2014 Winter Olympics with the warning “leave the children alone”.

Putin is not your friend

The far-right view on gender, sexuality and ethnicity has reasserted itself across Western Europe, Australasia, North America and beyond. And Russian leader Vladimir Putin stands on the wrong side of history on nearly every count. From Trump in the US, to Erdoğan in Turkey, to May in Britain, to Putin in Russia – the world is full of leaders who hold regressive views. And it’s on all of us to resist them at every turn, and keep pushing for progress on behalf of everyone. Gay or straight, cis or trans, black or white, of every faith and none.

– Follow Human Rights Watch for up to date information and ways to help defend and advance human rights around the world.