We need to talk about the 'Christian parents' on the BBC this morning. They don't get to wrap bigotry in bible pages. [OPINION] - The Canary 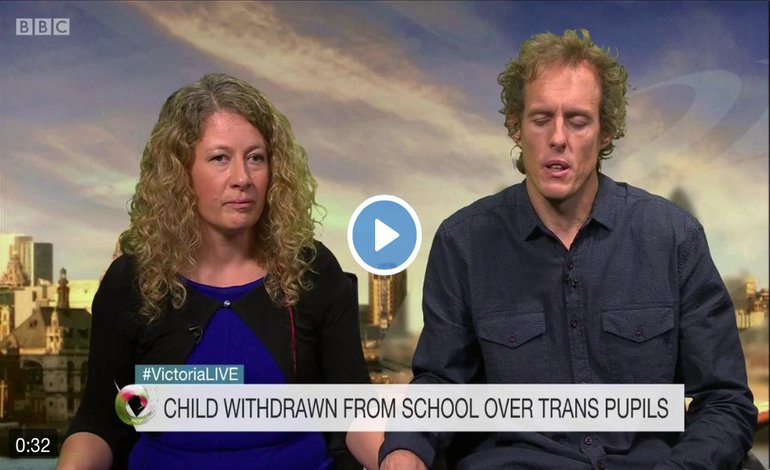 A Christian couple have withdrawn their six-year-old son from a Portsmouth school because teachers let another boy in his class wear a dress. The pair now plan to sue the Church of England school for permitting the child freedom of expression. This has nothing to do with religion, and everything to do with personal intolerance.

Nigel and Sally Rowe presented their case on the BBC‘s Victoria Derbyshire show on Monday 11 September. The pair wore concerned faces as they spoke of how “confusing” it was for their son to see another boy in trousers one day and a skirt the next. Explaining his reasons for withdrawing their son, Nigel Rowe said:

We were concerned about that because it’s very confusing. And how do children deal with that? Let’s remember that these are primary school children. This is six years of age…

We’re worried what effect that can have on the other children.

“It’s very confusing. How do children deal with that”

Nigel and Sally Rowe withdrew their 6yo son from a school with a transgender child pic.twitter.com/GK8xHPdm8W

This new transgender ideology is being aggressively imposed on unsuspecting schools, parents, and children. It is delusional and abusive. School classrooms, which should be one of the safest environments for children, are rapidly becoming dangerous battlefields in a war brought on by a radical transgender ideology. Vulnerable children are being used as pawns and will be harmed the most. We need to call it what it is.

The Church of England responded unequivocally, with a spokesperson for the Diocese of Portsmouth stating:

Our schools are inclusive, safe spaces where pupils learn to respect diversity of all kinds. We comply with the legal requirements of the Equality Act 2010 and believe that all should feel welcomed, valued, and nurtured as part of a learning community.

The media is misreporting the case in the same way it did with another Christian Legal Centre battle. That case involved Victoria Wasteney, Head of Forensic Therapy in the mental health unit of an NHS Trust. The self-described “born again Christian” was suspended after “harassing and bullying” a junior Muslim colleague. Just as in this Rowe case, the Christian Legal Centre drove the media coverage, reframing it as an attack on the Christian faith.

Wasteney also appeared on the Victoria Derbyshire show to cry foul. And much of the press treated her sympathetically. But the pitiful reporting was challenged by Secular Society President Terry Sanderson, who wrote:

When the case was being heard, The Daily Telegraph and Daily Mail published reports based almost entirely on what they had been told by Andrea Minichielo Williams of the Christian Legal Centre. It gave the impression that Ms Wasteney was another in a long line of Christians who were being oppressed and discriminated against at work.

Even when Wasteney and the Christian Legal Centre lost their appeal, the media continued the ‘persecuted Christian’ narrative regardless; which prompted criticism from other Christian voices. As Reverend Mark Woods wrote for Christian Today at the time:

Wasteney lost her case because it was weak in law, not because there’s anything wrong with the law. A Muslim exerting similar pressure on a vulnerable Christian would have been treated exactly the same way. Christians should be vigilant and should demand a level playing field for their faith. But they shouldn’t be crying persecution every time a judgment goes against them. The chances are the court was right and they were wrong.

Just as with Wasteney, the Rowe case is not about religious freedom or parental concern; it is about bigotry. The very assumptions underpinning the Rowes’ ‘concern’ and ‘confusion’ here are based in bigotry. And bigotry is not a victimless crime.

Earlier this year, a study by equality campaigning charity Stonewall found that half of all young trans people in the UK had attempted suicide. And eight out of 10 had self-harmed after experiencing bullying and harassment. One in 10 trans children reported receiving death threats at school. That is where our concern should be – with reducing the stigma that creates such horrific consequences in the lives of our young people. It is exactly why the Rowes would serve their children (and our society) better if they educated them in acceptance. They could have used their child’s alleged confusion as a teachable moment. Instead, they applied the wrong lesson. As trans comedian Bethany Black points out:

Parents: your kids can't catch gay or trans. They either already are or aren't, and all your hullabaloo will just upset them.

The Rowes are not the victims here: they are the perpetrators. And it is their intolerance that has no place in the classroom.

– Use your voice (social media, letters, etc) to lend your support to the trans community.

– If you are a trans person/loved one seeking guidance and support, All About Trans has compiled a list of excellent organisations.