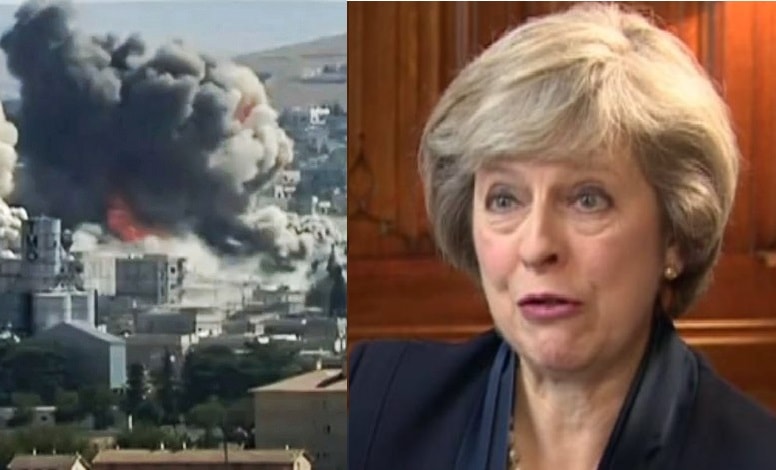 The Conservative government has overseen a 635% increase in arms sales to regimes that abuse human rights. In the 22 months since the 2015 election, the Conservatives have licensed nearly £5bn-worth of weapons to repressive governments alone. Many of these governments torture, abuse and kill citizens.

When compared to the £680m of arms sales to repressive regimes in the 22 months before the 2015 election, that’s more than a six-fold increase.

Facilitating the desecration of Yemen

Arms corporations have sold the majority of these weapons to the UK’s main client – Saudi Arabia.

A Saudi-led coalition has been bombing Yemen since March 2015. The dictatorship has been accused of war crimes for targeting vital infrastructure and densely populated civilian areas. Recently, the UN slammed the regime for killing huge numbers of Yemeni children. Nonetheless, the Conservative government has approved around £3.9bn-worth of arms to the Saudi kingdom since the 2015 election. The onslaught has destroyed Yemen’s economy, leaving seven million people on the brink of starvation.

Half of all UK weapons sales are to repressive regimes

Overall, the Conservative government has okayed £10bn-worth of arms sales for military use since May 2015. That means about half the weapons sales the ruling party has licensed since it won its 2015 majority have been to repressive regimes.

On top of devastating Yemen, the Saudi dictatorship carries out dreadful abuse of its own civilians. In July this year, the theocracy executed six people in one day. And even peaceful people are beheaded. In early 2017, for example, 41% of those executed were reportedly [pdf] killed for nonviolent acts like protesting.

As well as Saudi Arabia, the Conservatives licensed around £380m-worth of arms to the United Arab Emirates (UAE) during the 22-month period. This regime is part of the Saudi-led coalition desecrating Yemen. The absolute monarchy also regularly tortures its people, while issuing unfair trials and forced disappearances.

During the 22-month period, the Conservative government also approved almost £200m-worth of arms to its ally Israel. The ongoing and illegal Israeli occupation of Palestinian territories seems to be no problem for the Conservatives. Israel has created an apartheid state where Palestinians are essentially second-class citizens in everything from law to political affiliation, work and movement.

Basic democratic rights are also apparently unimportant if a state wants to buy arms from British companies. The vast majority of these regimes receiving UK arms trample on democratic freedoms that the Conservatives claim to uphold. To varying degrees, Qatar, Oman, Algeria, the UAE, Turkey, Saudi Arabia, Indonesia, Israel, Iraq, Singapore, Malaysia, and Mexico all heavily restrict their citizens’ rights to freedom of the press, demonstration and expression. A number of these countries also torture and terrorise their domestic populations. Still, the Conservative government has approved over £100m in weapons sales to each of these countries since the 2015 election.

Campaign Against Arms Trade (CAAT) has found that, out of 49 countries listed as “not free” by Freedom House, the current UK government has okayed arms sales to 36.

The UK has consistently armed many of the most brutal and authoritarian regimes in the world, and a number have been invited to London to buy weapons. These arms sales aren’t morally neutral, they are a clear sign of political and military support for the regimes they are being sold to.

#DSEI is a dark stain on our country’s already tarnished reputation. It’s time this festival of violence was shut down for good #StopDSEI

The Conservative government has also sold arms to Venezuela this year, which is an indictment of UK media coverage. The BBC and the mainstream media have hounded Jeremy Corbyn over Venezuela. On many occasions, our public service broadcaster has demanded that Corbyn condemn President Nicolás Maduro for the violent clashes between right-wing protesters and the government.

Meanwhile, the sitting Conservative government’s arms sales to Maduro’s government remain almost totally unreported. Theresa May’s party has approved around £80,000-worth of weapons sales to Venezuela in the past year alone.

While licensing arms to the most brutal regimes, the Conservatives still insist that:

The government take their export control responsibilities very seriously and operate one of the most robust defence export control regimes in the world. We rigorously examine every application case by case against consolidated EU and national arms export licensing criteria.

But it’s clear from the arms sales the government has approved that profit trumps human rights for the Conservatives. The government boasts that Britain claimed a 9% share in the global arms trade in 2016. But for normal people, that is a depressing statistic. It means the tyrannical clients of UK arms companies are using British-made weapons to oppress and kill countless people worldwide.

We do not have to put up with this death trade. Let’s shut down the DSEI event in London and stop UK government complicity in a dreadful assortment of human rights abuses.