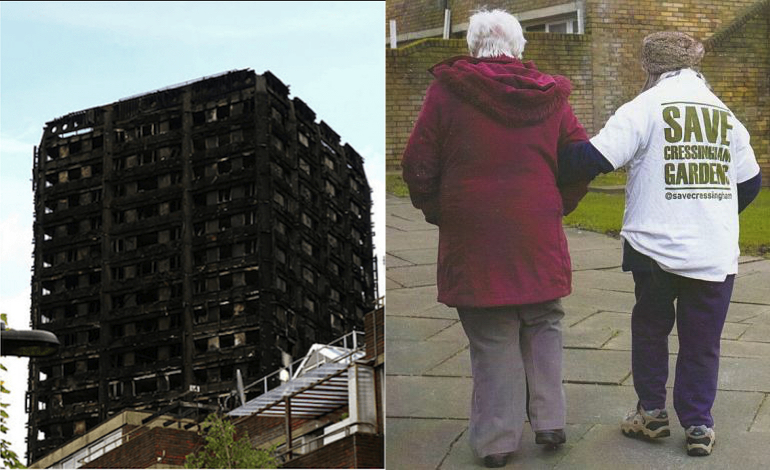 The Grenfell Tower tragedy caught the public’s attention and exposed the darker side of social housing in the UK. Now one book shows what some councils are really up to and how its affecting communities.

Communities have been fighting their councils and trying to save their estates from demolition for some time. Councils say the intention of these demolitions is regeneration, but many see it as a guise for social cleansing.

Anne E Cooper knows about the issue all too well as a resident of Cressingham Gardens – an estate that Lambeth Council has earmarked for demolition. And she has recently project-managed the Cressingham Voices project that produced the book 306: Living Under the Shadow of REGENERATION.

The Canary spoke to Cooper about the book and some of the wider issues at play.

306: Living Under the Shadow of REGENERATION is a collaborative project with the residents of Cressingham Gardens, allowing them to explore their memories and feelings about home, community and belonging.

Cooper, a professional writer, conducted a series of workshops with residents. These workshops informed the book. It has 11 chapters, each of which looks at the different walkways of the estate. They provide a snippet of life behind some of the doors of the 306 estate that was built in 1978. They also reveal the feelings of uncertainty that came after the council decided to demolish it. Essentially, the book provides a snapshot of the community that will be erased if the estate is demolished.

As the introduction explains:

This is not a fully comprehensive story of an estate nor is it ethnography, demography or sociology. Is it perhaps a fragmented narrative akin to a series of snapshots. It had been described as art against adversity; it is perhaps a form of social commentary. These are subjective rather than objective accounts. They are nevertheless candid accounts of the lived experience of people who have had little voice undergoing a situation not of their own choosing.

The book takes us behind the doors in the Crosby walkway where a resident provides a portrait of the morning. And to Hambridge Way, in a chapter that describes how the green expanses around the estate mean you don’t really feel like you’re in London anymore. Cooper herself writes a piece called The Bonds that Bind, which is a series of encounters over a period of time on the estate.

Cressingham Voices says, in a statement seen by The Canary, that Lambeth Council is demolishing Cressingham Gardens estate against the will of the majority of its residents. Even the High Court deemed the council’s decision to remove certain options from the initial consultation to be unlawful.

They also describe the following consultation as a “shotgun rerun”. Furthermore, they claim the total proceedings did not fulfil what the council said it wanted to achieve. And that was to produce the outcome along with residents. This process should have started from a blank page. But instead, Cressingham Voices says the consultation presented residents with a series of ready-made options for regeneration.

And Cressingham Voices claims, “when it became clear residents favoured the least intrusive options these were taken away”. They say it was in fact “a one way process”.

Cressingham Voices says the estate’s demolition will now start in the winter of 2018.

Cooper says the project was both a campaigning project and a mobilisation one that would involve the residents. She told The Canary:

It wasn’t easy to get the community involved. There’d been campaigning for a couple of years and the process had worn people out…

There are essentially two sets of people, those who engage and those who don’t get involved.

She said that out of the 20 who did participate in workshops, around half of them were new to the campaign to ‘Save Cressingham‘. She then delivered a copy of the book to each of the 306 residents on the estate as a means of motivation.

The second aim of the project was to allow residents to tell their story from a personal point of view:

Personal accounts focus people on the human side that lies behind the statistics. It also gives it the immediacy that you don’t see in [coverage of] estates.

And Cooper also says that the timing of telling these stories has never been more important:

There has been a huge interest in social housing since Grenfell. Beyond the architects and the activists.

When Cooper describes why the estate means so much to residents, she also touches on why the Zone 2 piece of land is valuable to Lambeth Council. Because it’s right next to the park and 10 minutes from central London:

It’s the best place in London to be.

And it’s this premium on London property that makes the council’s regeneration so unfair. It’s why people often use the term social cleansing. Because as Cooper says:

People are essentially being priced out of their homes. For example, Stuart, whose story is in the book, has a wife, kids, and owns a two-three bed property on the estate. But he would only get a third of its value under a Compulsory Purchase Order. With that amount, he would be forced out to zone 5/6.

And with the estate having opened in 1978, the timing of its demolition is callous, says Cooper. Because many of the residents that moved in at the time will now be around 70 or 80 years-old.

306 reveals the faces, lives, and stories behind cold terms like ‘regeneration’, ‘social housing’, and ‘council estates’. It details the people and not just the statistics inside communities like Cressingham Gardens. If the council demolish it, and others like it, it will price most residents out of their homes and force them to move away from these same communities.

306 demonstrates just what a loss that would be.

– A new edition of the book will be available soon. To order go to the contact page on the Cressingham Voices website.

– Show your support by opposing estate demolition. Start by supporting the #StopHDV protest in Haringey on 23 September.

– Support The Canary if you like the work we do.