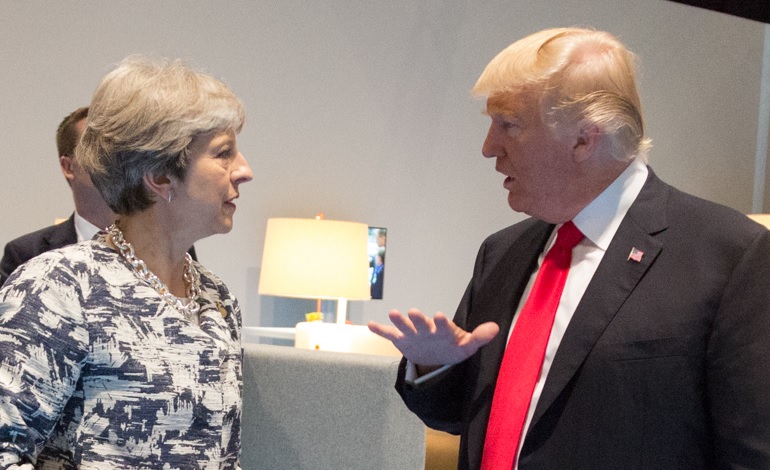 Last week, Conservative Prime Minister Theresa May begged Donald Trump to intervene in a trade dispute, reportedly at the behest of her coalition partner, the Democratic Unionist Party (DUP) of Northern Ireland. The call marks a new low in Britain’s balance of power with the US.

May had a phone call with Trump last week in which she pleaded with the President to intervene in a legal battle between two rival aircraft manufacturers which threatens to destroy thousands of jobs in Northern Ireland.

The dispute involves American aircraft manufacturer Boeing and its Canadian rival Bombardier. Boeing has accused Bombardier of receiving unfair state support for its C-series plan, including a loan worth £113m given to it by the British government.

The US-based International Trade Commission is set to make an initial ruling on the case later this month. If, as analysts predict, the Commission rules against Bombardier, the company’s Belfast factory may be forced to close, putting 4,500 jobs at risk.

The call comes at a particularly inopportune moment. First, Trump is keen to display his ‘America First’ foreign and trade policy. And second, the UK is trying to broker a new post-Brexit trade deal with the US.

So why make the call? The answer is: to appease May’s unlikely coalition partner, the DUP.

Even May’s backers at The Sun expressed concern over the incident, writing that “it is understood DUP leader Arlene Foster leant on the PM over the issue”.

This is the latest in a series of embarrassments to rock the May government since its deal with the DUP.

During the general election, May argued there was no “magic money tree” to properly fund public services. She then found £1bn for a deal with the DUP, and hoped to agree it behind closed doors.

But a legal challenge from businesswoman Gina Miller forced the PM to take the deal to parliament for review and scrutiny. And as The Canary‘s Tracy Keeling reports:

The Conservative government also faces a challenge to the deal in the High Court. Ciaran McClean from Northern Ireland launched the challenge against it in July, on the grounds that the deal threatens the Good Friday Agreement. He also argues it’s in breach of the Bribery Act.

The regressive attitudes of the DUP also serve to embarrass the government.

The DUP blocked equal marriage rights for same-sex couples in Northern Ireland; which should come as little surprise from the party whose former leader ran the ‘Save Ulster from Sodomy’ campaign. And as recently as last year, DUP politician Trevor Clarke said in the Northern Ireland Assembly that he didn’t know heterosexuals could get or transmit HIV.

The DUP is equally regressive on women’s rights. Although 70% of voters in Northern Ireland back a change in abortion law, DUP leader Arlene Foster vows to retain the almost total ban on terminations. Including in cases of rape and incest. And this despite a High Court ruling which found that forcing women to persist with pregnancies borne of sexual violence is ‘incompatible’ with their human rights.

In her desperate bid to cling to Number 10, May did the deal regardless.

A coalition of chaos

During the election, Theresa May warned that electing Jeremy Corbyn as Prime Minister would create “a coalition of chaos”. She argued that Corbyn would be hamstrung by coalition deals with the SNP.

Instead, May’s shenanigans have left her government held to ransom by anti-abortion, homophobic members of the DUP. And to such a degree that the Prime Minister is humbling herself before the President of the United States. Whichever party voters picked in the 2017 general election, no one voted for this.

– Read more from The Canary about the DUP here.

– You can support Ciaran McClean’s legal case against the DUP deal here.