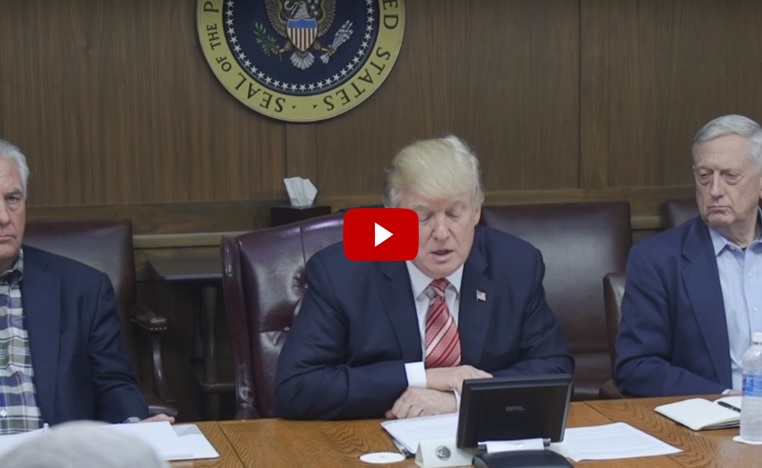 It took US President Donald Trump only 15 seconds after recent natural disasters to make a statement he’ll find difficult to live down. He suggested that, because of recent tragedies, the US somehow needs corporate tax cuts now more than ever.

we’ll be discussing our plan for dramatic tax cuts and tax reform. And I think now, with what’s happened with the hurricane, I’m gonna ask for a speed-up… I wanted a speed-up anyway, but now we need it even more so.

Bloomberg describes how “a make-or-break legislative battle [is] looming on taxes” in the US. And Trump’s team is reportedly organising a “full-bore sales campaign” for its tax plan; even though it hasn’t yet determined the key elements of that plan.

Many critics, meanwhile, have responded to Trump’s exploitation of tragedy to push an unrelated tax agenda with shock:

Not parody: GOP says, because of Irma, they need to expedite tax cuts. That SERIOUSLY is their answer to everything. https://t.co/OQ9R1rf2Ns

So what is Trump’s tax agenda?

Trump has previously called for the lowering of corporate tax to 15%. And while US Treasury Secretary Steven Mnuchin has said “I don’t know if we’ll be able to achieve that”, he has insisted that the Trump Administration will “get this down to a very competitive level”. The corporate tax rate is currently at 35%.

After calling for a “speed-up” of tax reform, meanwhile, Trump said [3:05] that America’s business tax should be “more globally competitive”; and insisted “we’re the highest anywhere in the world right now”. Politifact has previously called this claim “one of his most repeated falsehoods”. And CNBC says:

In reality, the United States has average or below average taxes compared to similar economies.

At the same time, prominent Trump opponent Bernie Sanders recently pointed out that:

With Trump linking natural disasters to a supposed need to cut taxes, Naomi Klein – the award-winning author of The Shock Doctrine: The Rise of Disaster Capitalism – chimed in on Twitter:

One for the shock doctrine record books: Trump uses #Irma to push for tax cuts WHILE THE STORM IS STILL HAPPENING https://t.co/WhYRSJohUz

Klein uses the phrase “shock doctrine” to describe how, “in moments of extreme national trauma”, societies are more vulnerable to “being politically manipulated”. And she explains how:

Those moments of heightened disorientation and fear have been harnessed by elites to push through some of their most unpopular pro-corporate policies that systematically stratifies society between the haves and the have-nots.

One example of this, she says, was Hurricane Katrina in 2005:

In the traumatic aftermath, there was this frenzy of privatisation and deregulation – and of course people can’t engage in economic debates when they have nowhere to live. New Orleans now has the most privatised school system in the US; public hospitals were closed and public housing demolished in the interest of gentrifying the city.

Klein’s tweet above, meanwhile, suggests that Trump is now using the same tactics to push through corporate tax cuts. And the author asks us to look at Trump’s team for evidence of how they’ve benefited from disasters in the past:

What did Steve Mnuchin, Treasury Secretary, do after the 2008 financial crisis? He was at the centre of the profiting from foreclosures.

In short, US citizens need to be increasingly vigilant. Because Trump and those around him are not afraid to exploit tragedy to further the interests of their rich and powerful friends. And citizens must not let them get away with it.