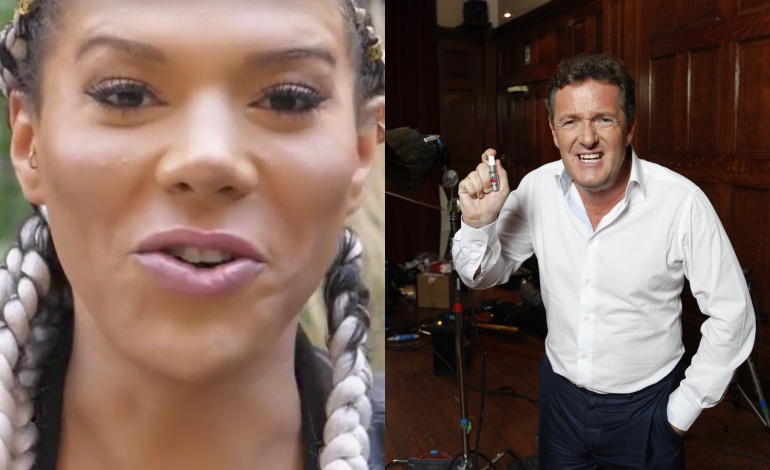 Munroe Bergdorf is a transgender model who was fired from a L’Oreal diversity campaign because she spoke openly about… diversity. Despite receiving criticism from the mainstream media and its pundits – including Piers Morgan – she has contributed to a vital, timely discussion about white privilege and systemic racism.

Now in a new video, she puts the record straight – and says she thinks Morgan should “just shut up. And just listen”.

Because she’s worth it

Bergdorf was the first ever transgender woman to be hired by cosmetics multinational L’Oreal in August 2017.

In a new video, Bergdorf explains that, following violent riots in Charlottesville Virginia, she wrote “a Facebook post that became worldwide news, oddly” [0.27] about some of the issues that emerged. She wrote this because she was “really, really, really pissed off” [0.37]. An article in The Daily Mail took her post out of context. In the (now deleted) Facebook post, Bergdorf said:

Honestly I don’t have energy to talk about the racial violence of white people any more. Yes ALL white people. Because most of ya’ll don’t even realise or refuse to acknowledge that your existence, privilege and success as a race is built on the backs, blood and death of people of color.

And Bergdorf was fired because, apparently, her values were “at odds” with L’Oreal’s.

This could have been a career breaking moment. But Bergdorf has used the publicity and media attention to open up a valuable discussion about white privilege and institutionalised racism.

In her latest interview with Double Down News, Bergdorf puts the record straight about the original post, explaining [0.45]:

I don’t think that all white people are literally racist. Society is built on different foundations. And one foundation that society is built on is white supremacy. I do think that all white people benefit from white privilege. And that’s not something that everybody will be happy about. But it is a fact. And I think the more we can talk about the fact that this is a ‘thing’, the more we can really think about dismantling it.

Bergdorf nailed the essence of systemic racism. And she offers a solution.

Calling out a systemic oppressive structure is not hurting anyone. Other than the people that, y’know, it benefits. That’s really the problem here, is that the people who benefit from racism don’t want to share that power.

Piers Morgan can just shut up

On 4 September, Bergdorf held her own in an interview with Piers Morgan on Good Morning Britain.

The Canary has often reported on Morgan’s views. In this interview, Morgan frequently interrupted and spoke over her. And he also failed to comprehend Bergdorf’s argument. In response to Morgan, Bergdorf says [1.53]:

He can just shut up. And just listen to people when they’re speaking rather than having to always have the last word.

And she goes further, arguing that Morgan’s interview style is [2.05] “literally what white supremacy is”.

But on 21 September, Morgan reignited the debate, calling Bergdorf an “insufferable creature”. And she says Morgan “seems to be quite happy embodying the very problem that I was highlighting in the first place”.

In response to Morgan’s recent use of the n-word, Bergdorf has, again, highlighted how dangerous and insidious ‘casual’ racism can be. She said on Twitter:

Not sure what’s making me feel more bilious. The fact that he genuinely doesn’t understand what… he is saying is hugely offensive…

That he casually used the n-word in a tweet. Or that in doing so he is cosigning the already rife racism & bigotry within his loyal fanbase.

Politics is your future

In contrast to Morgan’s commentary, Bergdorf celebrates Jeremy Corbyn’s style of politics because it is [2.36] “accessible to young people” and she goes on to explain why this is so important in the current climate [2.48]:

The reality of politics is that it’s really exciting. It’s your future. It’s the chance for you to get involved and have your say with how your life is going to go.

Bergdorf says this is important because [2.57]:

We are in a position where the world is being ruled by absolute morons. We’ve got Donald Trump as President. We’ve got Theresa May fucking up the country. We really need to think about some new solutions rather than trying to address new problems with old solutions.

Out of the echo chamber

Bergdorf has used the media attention she’s gained from challenging fundamental and deep rooted issues in society to promote real change. As she says, we need to speak to people who [3.21] “are not in your direct echo chamber”. She says this can [3.25] “create chaos”. But the chaos she is talking about is the kind that can create change.

And change is needed, now more than ever.

–  Find out about the grassroots work done by SARI the Anti Fascist Network and Black Lives Matter UK to challenge racism and inequality.

– Support Cruelty Free International and PETA to put a stop to animal testing by companies like L’Oreal.